LIVE! Except pre recorded for better, more live-like quality! This was a Hangouts session I participated in with @captainjez and Jay Boston and a guy named Rick and another dude (i’m sorry!) to talk about hubs and belts and gear drives and direct drives and things. I think they may have even added extra lag in post production to make it seem like you’re still watching it live. It was fun. 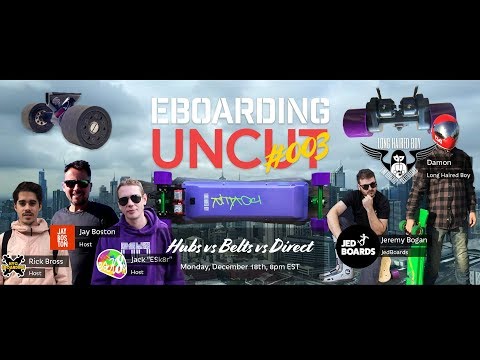 So i thought I’d share. It’s making its rounds on Facebook by now i’m sure, and i plan on doing a blog post on it later to provide more of my thoughts on the topic.

@hummie your motors are in the pic but I accidentally grabbed a koowheel when somebody mentioned hubs instead of yours. I hope you can forgive me for such blatant treachery. Your hubs were actually just out of frame in the background. I should have set them on the bench with the carvons.

god dammit! your gonna make me watch this in class?

@psychotiller i was rocking that hat you sent me the whole time.

Who is Rick? His needs better internet connection

So how do you get invited to the party?

If you wanted someone to talk about hub motor technology…

LHB: “What size are those cans?”

Can’t say I agree with Jed board classifying as a direct Drive when it has a reduction ratio… Great discussion.

Correct. its not a direct drive. Its a gear drive. We have four known good systems now.

I’m about to write a giant informative blog post.

It can start from a vertical standstill.

Oh man, I laughed so hard

that noise is like nails on a chalkboard to me

Hard to agree with that. Sounds like music. https://www.instagram.com/p/Bcc1Dm9jK_p/

these videos trigger me so hard.

I road your beast at SPD2, it’s the weirdest noise ever. Don’t get me wrong I prefer BLDC over FOC purely on the noise, but gear to gear just makes me wanna pour lube on it

Too bad you got on her with 4s. 8s she gets a bit ornery. It would be easy to shield and lube em. Might take some of the ring out…

Yep it’s a bad habit. I do it quite a bit and so do lots of others. Usually happens when your a bit nervous

do we have a discord server for eboard DIY? we totally should, we could enable this kind of thing to happen more often

its a filler that also happens to work in place of self confidence when searching for words.