I really like the utility and DIY aesthetic of @RunPlayBack’s boards so based this build off of his.

Having ridden Boosted and the Acton Blink I wanted to start with a deck that had a kick tail for maneuverability. I went with a JET deck with a tail that is long, but can still be kick turned. I also carved out a layer of wood from the deck to recess the case slightly into the deck. 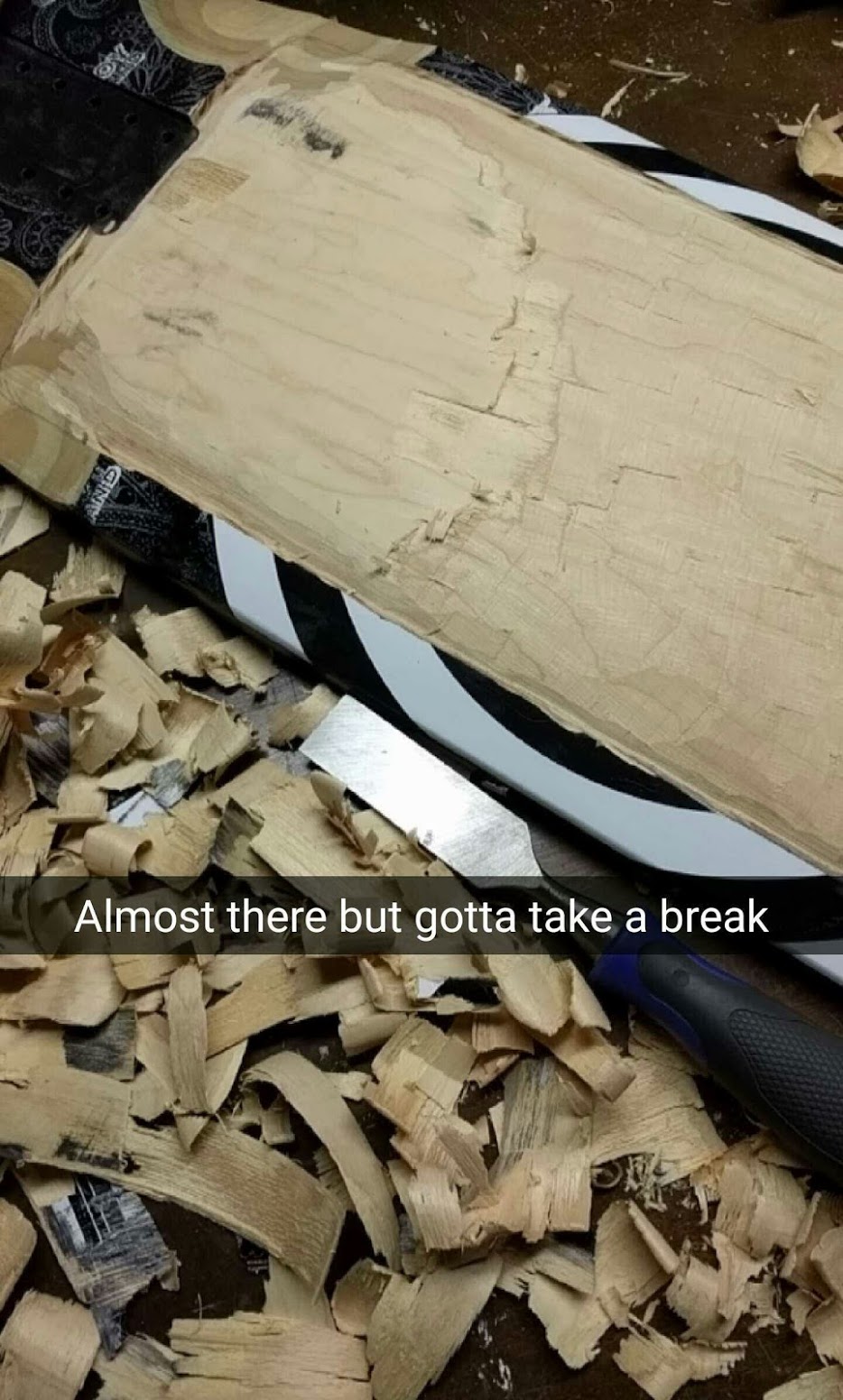 A SPACE Cell Pro 4 10s4p battery fits nicely into this cutout, but I had to cut the corners off as the wheels were biting them. 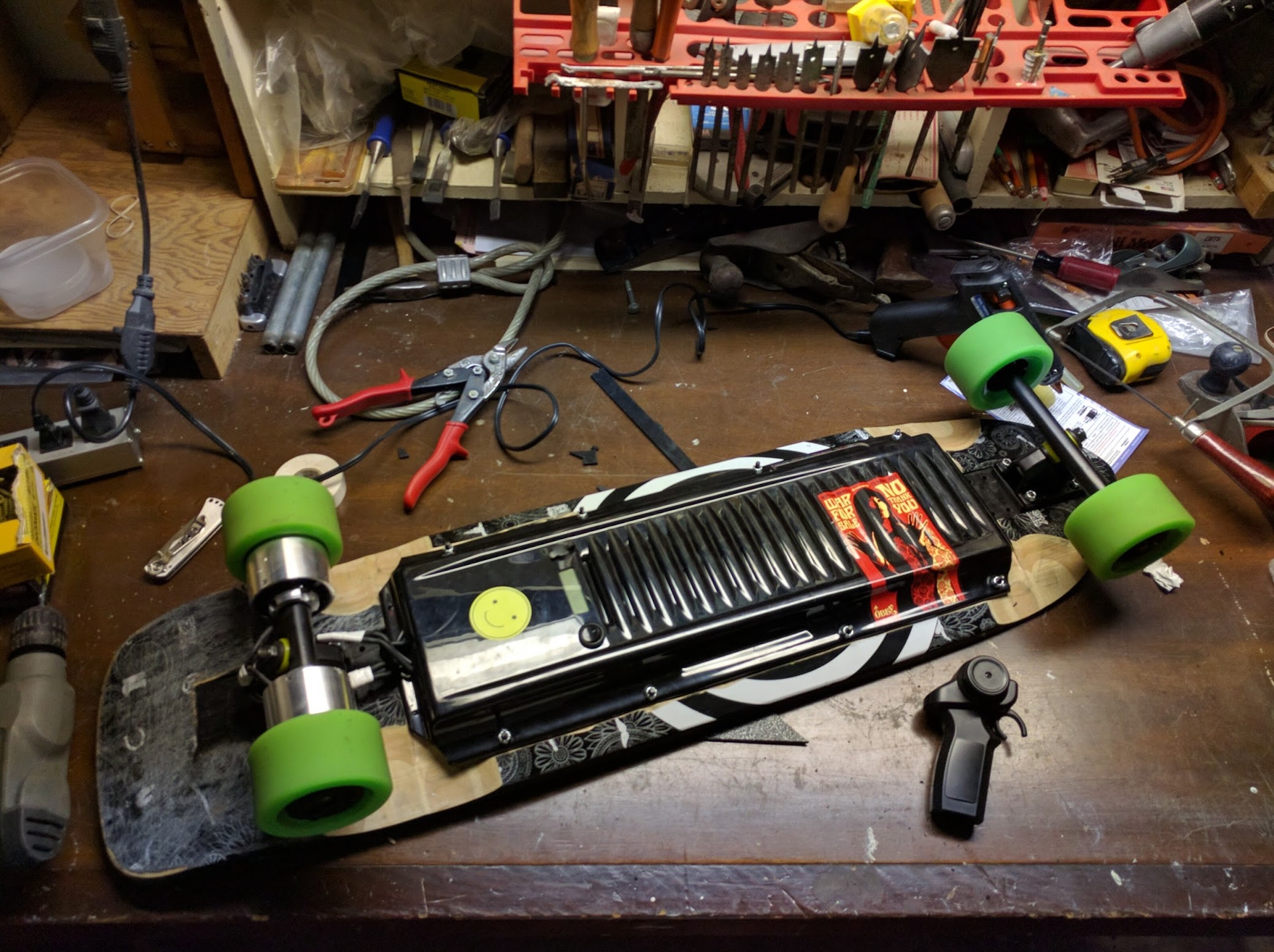 Here is an early mockup of the wiring with the old 12s ESCs I was running, they ran strong, but I wanted more control so upgraded to Ollin VESCs 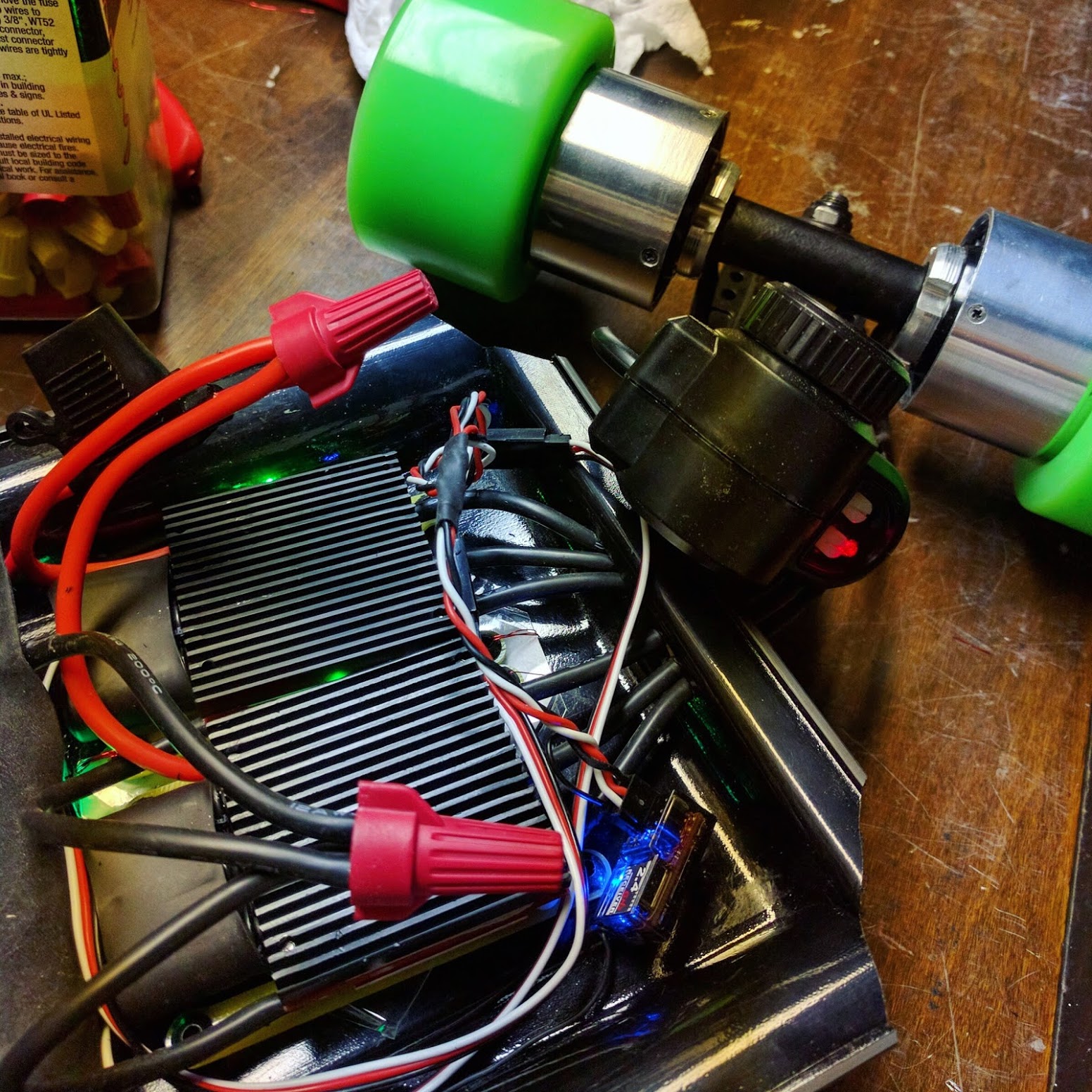 After a weekend of riding it hard, and sometimes towing a friend up hill, one of the ESCs burnt up. Fortunately I had already ordered the upgrade to VESCs. apologies for the electronics gore. 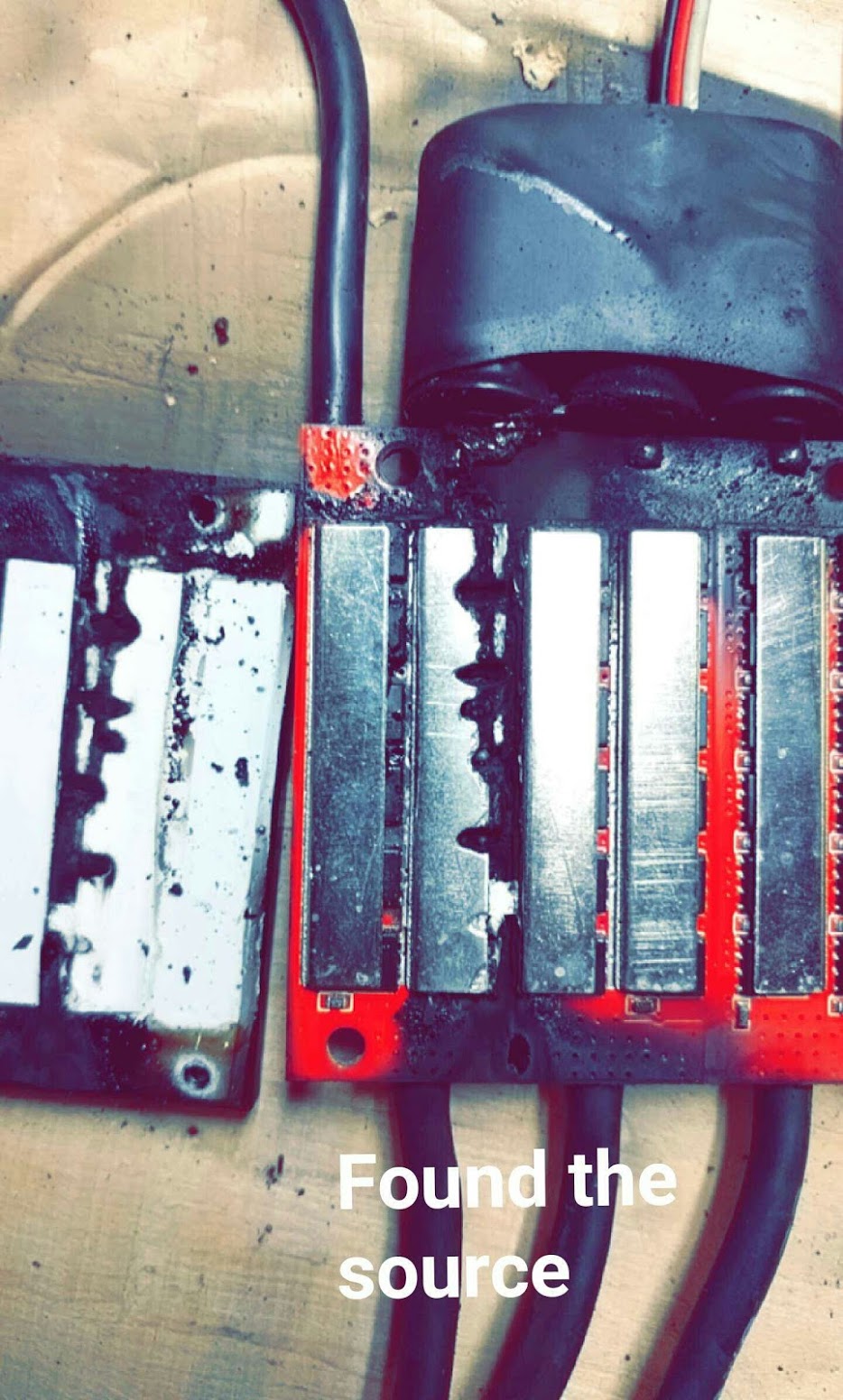 While waiting for the new ESCs I went to RadioShack to buy LEDs on their closing sale and wired those into the front and back trucks.

Now I have a BEC powering the low voltage electronics (2.4Ghz receiver and LEDs) and the VESCs just power the wheels. Cleaned up the wiring and all the connections to reduce risk of failure. 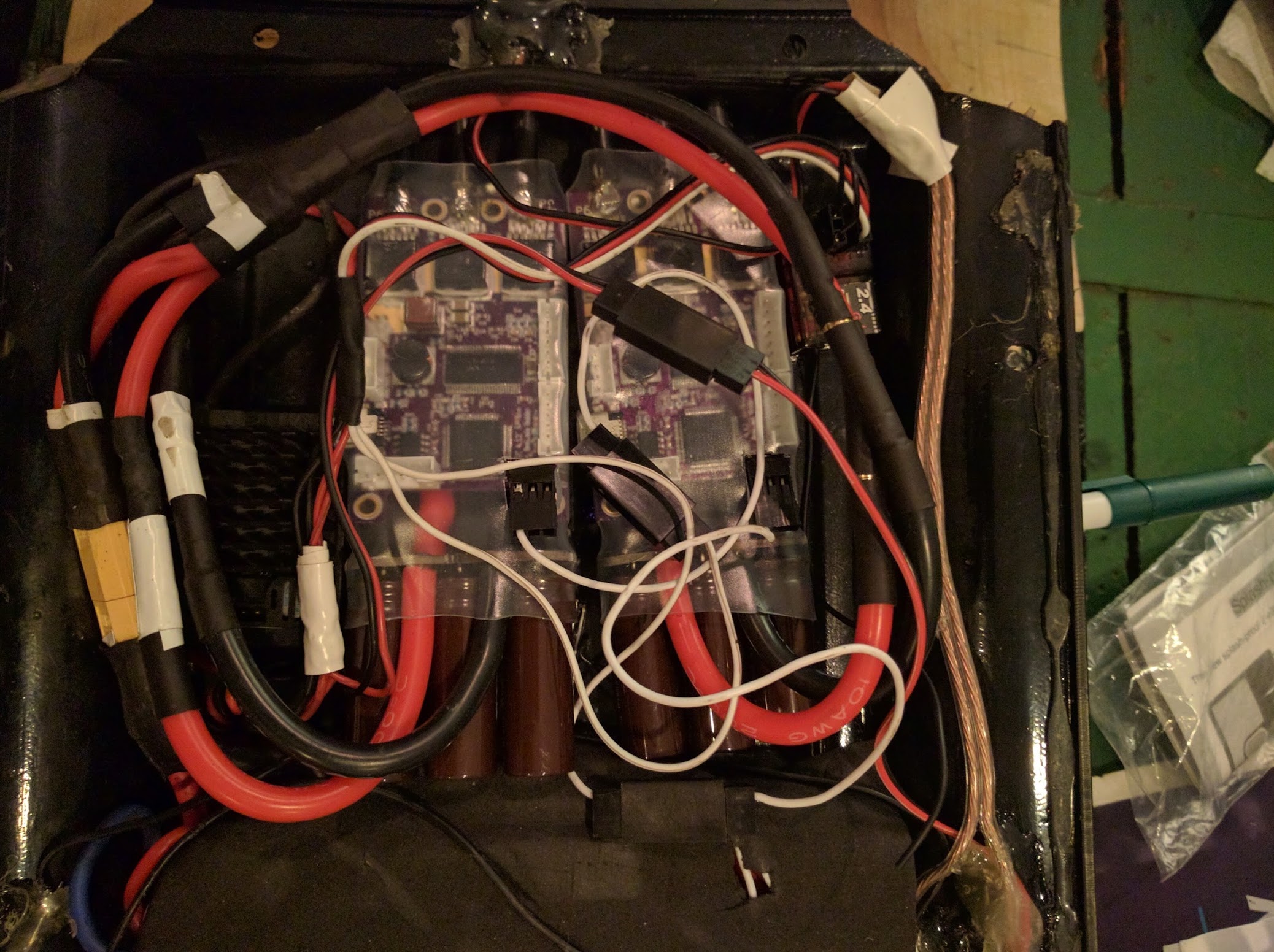 Here are the VESC settings (as of September 21, 2016) and I’m still not happy with them, if anyone has any feedback let me know. It doesn’t accelerate or brake as hard as the previous ESCs, but also feels much smoother. I had max input at 42v but that kept causing an error so bumping it up to 57 (VESC default) prevents the breaks from failing but I’m worried I’m overloading the battery. 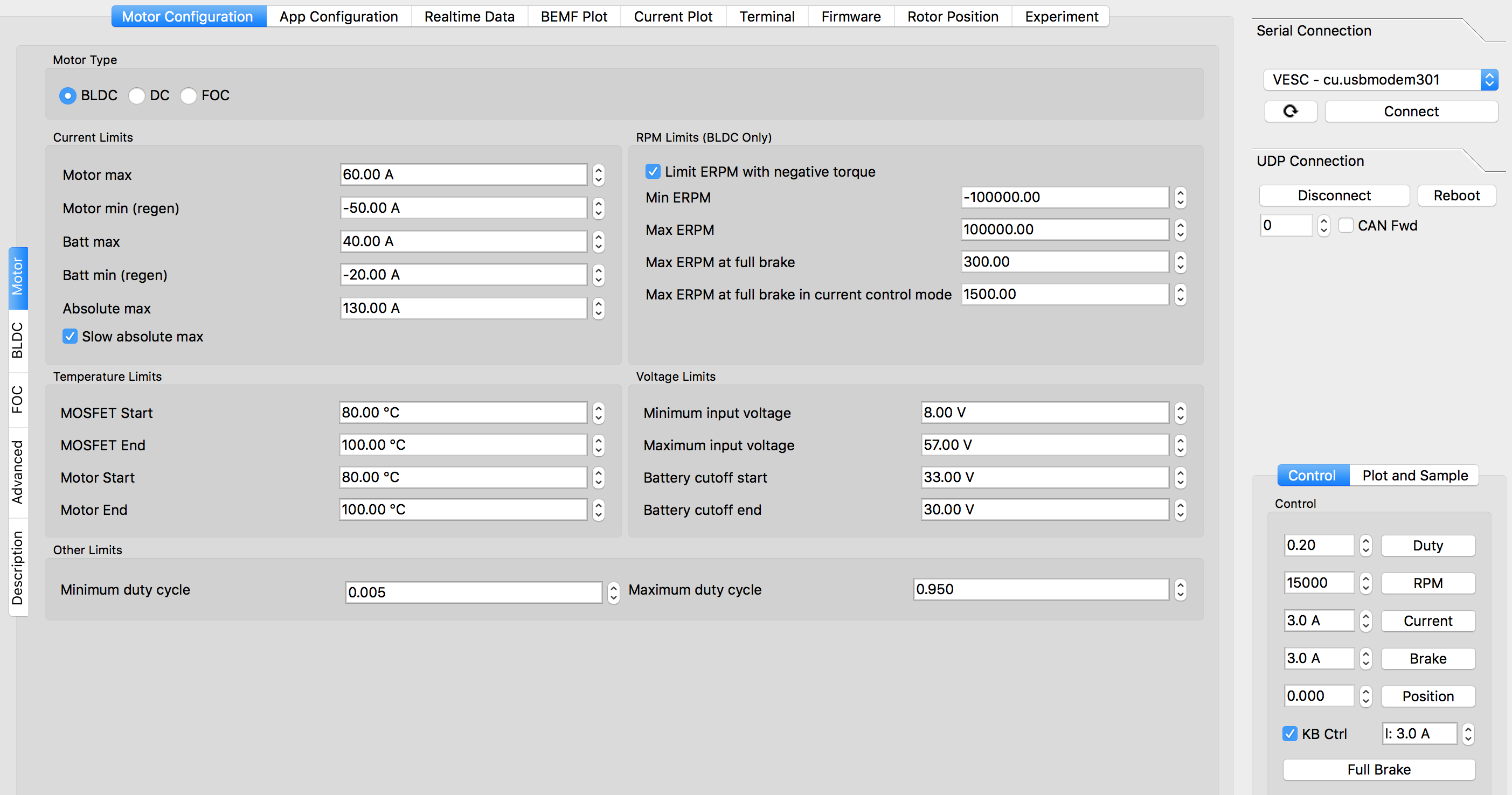 In terms of safety I got triple8 elbow and knee pads and a T8 downhill racer full face helmet. I also have sector 9 slide gloves I hope to build a remote directly into, like power gloves, so that I can stay safe and wear gloves while maintaining good control over my board.

I’ll be up in NYC over the weekend riding with a number of friends who are in the esk8 community, mostly Boosted fans. If any of y’all know Sam Sheffer, gonna try to get him into the DIY scene a bit. Feedback welcome, especially on VESC settings, I’m learning a ton in doing this.

Dope build man! I remember seeing this on Instagram. I don’t own carvon motors but I think upgrading to v2.5 might help

Thanks! Yeah I live in an area with lots of hills and thought about the upgrade but these motors seem strong enough to pull me up them with the right settings.

You should change battery Regen to -8a per VESC. -20 is to high and will charge the battery higher than its rated max current.

You might be drawing more amps with v2 vs v2.5 which is never good for the battery. Some setting changes might help @LEVer should have the optimum vesc settings

Images don’t work for me. Sounds good though!

Thanks, should be working now

If you want them to accelerate harder especially at low speeds you need to increase the motor amps to maybe 80. But I don’t know how much the carvon can handle. So it is at your own risk. I guess your old ESC did not care about that and gave the motor as much amps as he wants.

Nice work Scott! Very clean build but I’m probably bias because I have a soft spot for Jet decks. A few things stand out to me in regards to your VESC settings:

“Motor max: 60.00A” looks good and theoretically you could bring it to 70.00A on Carvon V2’s but it’s not a significant difference.

“Max ERPM: 100,000.00” is high and the Carvon’s will take it but I typically keep my ERPM at 70,000.00 for efficiency. This also depends on your weight and what kind of terrain you’re riding on. I don’t weigh much and I ride primarily on flats.

“Batt max: 40.00A” feels a little high for the Space Cell. I believe both VESC’s should be programmed to total a 40.00A draw from the battery. So basically 20.00A on each VESC. Someone correct me if I’m wrong.

My voltage limits on the original Space Cell are:

Hope some of this helps!

Thanks! these settings are super helpful. Enertion’s website says peak output is 80a and I removed the 40a fuse. Maybe I’ll go easy on the battery and split the difference. I don’t weigh much but have a number of hills, what is ERPM exactly and do higher numbers provide more torque? I’m not doing much long range riding so using more juice isn’t a concern.

awesome thanks! I’ll adjust that

ERPM is the max RPM’s your motor will reach at top speed. It’s how you can speed limit your board from going too fast. I prefer to stay under 25.

The cells are rated for 80a continuous in 4p and I have mine set to 40a per VESC for max draw. They never draw 80A continuous, however, and it’s nice to have the extra power on demand.

Do you actually hit 70k erpm on carvons? I would’ve thought the VESC would error out at those speeds.

I’m not quite sure if I’ve hit 70k, how do I measure it, through BLDC tool while riding? For a long time I had it set to 100k which is what I’m assuming just maxed out the RPM/top speed for Carvons. After my friend’s accident I started playing with the ERPM to speed limit the board. I found that 50-60-70k (beginner / intermediate / advanced) is kind of the average settings on Carvons for someone who weighs 135-170 lbs. So depending on whose riding the board, I tweak the ERPM.

for 1:1 systems your erpm shouldn’t be that high sure to generally lower kv. Most likely the limits you’ve been setting haven’t been doing anything if they’re at 70k. What’s the kv of your motors? Assuming 100kv with 7 pole pairs, you should be hitting ~30k erpm tops with 10s. You can still limit speed by limiting erpm, but it’d have to be much lower with hubs.

Thanks everyone in this thread for all the feedback! The board is running smooth and strong, even while taking the hills in my neighborhood.

@Jinra @RunPlayBack maybe I’ll write a little web app to help calculate rpm limits based on target mph/kph. With FOC on the limits don’t work but might be handy for those running in BLDC mode.

@Jinra @RunPlayBack made a little app for RPM calculations. Hopefully my math is correct, pretty sure it is: https://scottkellum.github.io/Esk8-RPM-finder/