Belts! Do they stretch or do they not stretch? KGO!

Explain or your answer is irrelevant lol

Everything stretches. Some not as much as others. Sauce: Am mechanical engineering major.

Oh stop being a hall monitor lol. As it says, its for the lolz. Enjoy the shinanigans while you can.

Its an absolutely valid question. One that may spark a healthy debate and outline the quality and availability of decent belt options. I have it on good authority that asking whether belts stretch is akin to asking whether all tyres wear at the same rate. Depends on the belt. They are not supposed to stretch unless they are about to break apparently. I say apparently because I’m not the mechanic who made the claim.

I’d say change the title and see what occurs in a proper discussion.

You’re right, belts are designed to not stretch at all due to the fibreglass/ Kevlar bandings inside of them. They will stretch if there is too much force exerted on them. They have a very high tensile strength, but little elastic strength.

They should not stretch, but they do become more bendable which lowers the tension a bit

I can confirm that. Just after about 4x 10 km rides over a 4 day span I replaced my new belts with new belts and the newer belts were tighter than the old new belts.

Reason for replacing was one belt had a hole in it from a pebble and I wanted to wear my belts equally so I replaced both.

Everything stretches at the molecular level, but timing belts as used in esk8 applications do not stretch. They can tear or break. The teeth can be sheared-off. But belts getting longer with use is a figment of the imagination.

To stretch or not to stretch … I know a certain thing with that eternal dilemma.

wanted to wear my belts equally

Would this not increase the chance they both fail at the same time, perhaps during emergency braking?

Ol, I’m not gonna get a debate here just passing on some knowledge.

Timing belts are made from highly saturated nitrile rubber, a synthetic compund that behaves like rubber but does not wear or degrade like rubber.

The reason a belt stretches on a Harley and does not on a skateboard is the external temp influence, oil and exhaust. Those conditions do not exist on skateboards.

In a normal environment a timing belt will not stretch, only tear. Most timing belts incorporate aluminum or steel threading to force a belt to keep it’s shape. This also has the added effect of stopping the surface tears that used to occur before the inclusion.

I don’t know. This is my first belt drive and I want to start with fresh belts to know how it wears down on my build. I also think I got the idlers on the wrong side. Got to fix that. I’m actually pretty sure of that. 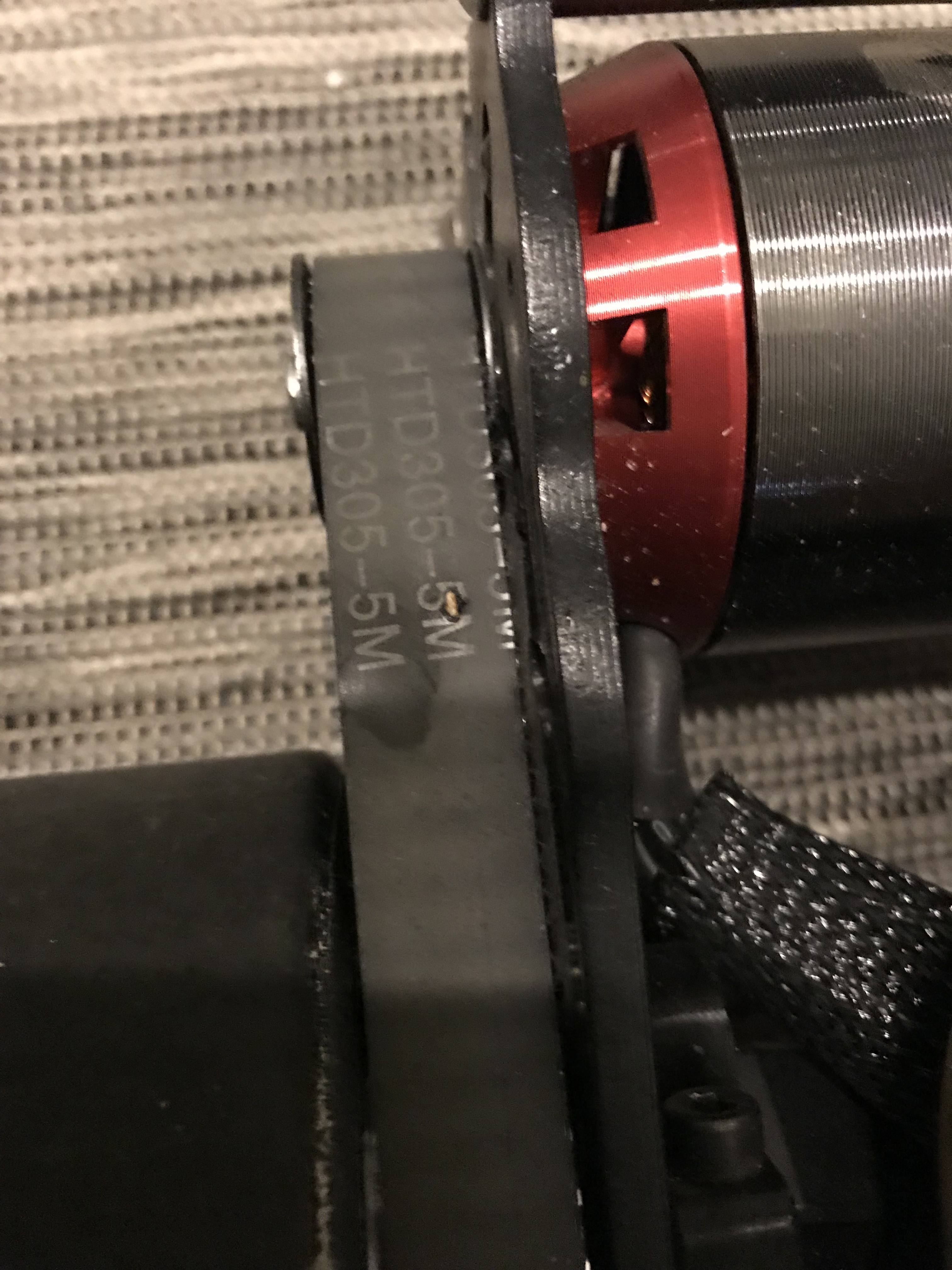 If belts don’t stretch, how do you explain the non-adjustable mounts from diyeboard found on things like the riptide going from belts way too tight to so loose it skips teeth every time you accelerate or brake. The only solution is “add an idler” and that works for much longer than the initial time spent without an idler since the belt is already broken in and stretched out.

The diyeboard thread is full of people complaining about stretching belts and unsafe rides. Perhaps the consensus should be “Cheap belts stretch, good ones don’t”.

I’m curious if it’s just a combination of factors that make our belts seem loose.

On one side, the belt not stretching side… First, a wearing wheel core alone (minus the presence of a wheel pulley bearing) can make a belt feel loose. But replacing with a fresh belt and being tight again would nullify this as a potential cause.

Second, wearing down pulleys will make a once taught belt feel loose. But same argument as 1, replace the belt, if it feels tight again it’s something else.

Somewhat in the middle, all other wear aside, belts themselves do get worn down, if they don’t stretch. The Kevlar and reinforcement inside starts to show. This means material is being removed, hence a slightly looser belt more and more over time.

Also, new belts don’t feel as flexible. As you wear in belts, they start to feel more flexible. Maybe with brand new belts, the bends they ship with act a bit as their own built in idler in a way, putting tension on itself until you wear it in.

Finally, maybe there are just a lot of belts that, combined with all the other wear and play over time elsewhere in the drivetrain, just do stretch a bit over time.

Who knows. We do know we eventually replace belts and it helps.

Belts deffo do stretch. I have the Kevlar ones and when I first put them ony board everything was tight and no cogging on braking. After 50 miles or maybe less eventually they started slipping and cogging and I had to move the motor out a little. Then again after a certain amount of time but then after that they seemed to be ok forevermore until I just changed them.