So I got a BMS for my lipos, but I’m not sure about a few things. The instructions are pretty straightforward, but I was wondering how I could tell which balance lead on the lipos corresponded to whichever pin on the balance connector. Right now I have 2 6S lipos wired in series. Also, The charging port I got doesn’t list which pin is negative or positive, their simply numbered 1, 2 and 3. So I’m not sure which ones I need to solder to. Any help is greatly appreciated.

I checked the voltages of each cell and I can see how they’re ordered, does that mean the first cell (3.7V) would get wired to pin 1, and the last (44.4V) to pin 12? I assume I could just cut the ground off as well.

Here is a diagram for 10s to Bestech bms. In principle, it’s the same. I checked the voltages of each cell and I can see how they’re ordered, does that mean the first cell (3.7V) would get wired to pin 1, and the last (44.4V) to pin 12? I assume I could just cut the ground off as well.

Alright, so I wired everything and now I’m even more confused… For some reason, the VESCs are constantly blinking blue and the switch doesn’t seem to work. Occasionally, at seemingly random moments the VESCs will stop blinking and turn on. So far this has only happened with the switch in the ON position. Then if I use the switch while the VESCs are powered, they turn off as intended. However after that I cannot reliably turn them on again and they go back to blinking.

I checked the voltage and this is what I got. Then for some reason, when I plug in the receiver, the voltage from P- and Battery+ goes down and the VESCs stop blinking. Is this simply the idle voltage that the circuit has? Would lowering the VESC minimum input voltage fix the blinking? I have no idea what’s happening

Did you add that switch? I have this same BMS and it does not have an e-switch functionality

I asked them to include and e-switch when I ordered it and that’s what they sent.

This is how I hucked mine up and works perfect. Also could u tell me if your switch works? I have the same brand but didn’t ask for a switch. So far I have been using a spark connects but I would prefer a switch.

No, the switch randomly turns on and mostly doesn’t work at all. Mine is wired in the same way except I haven’t attached the charging port yet.

Bestech BMSs are hucked up slightly differently I believe

You should probe each balance lead to make sure you get the expected voltage. I burned a couple BMS’s because I failed to do this :’(

Also this is how lipos are assembled. Your balence leads could potentially not be wired correctly 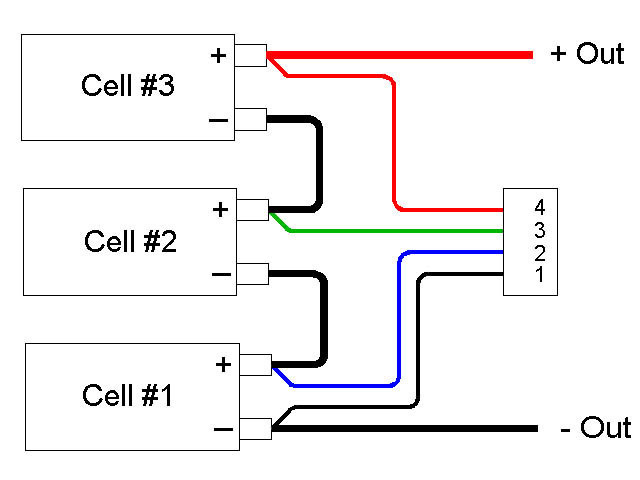 I just checked the balance wires again and they seem to be in the correct order. pin one is ~3.7 and it increases by ~3.7 each succeeding pin.

So the switch functionality still isn’t working… Does anyone actually have a Supower BMS with a working eswitch?

The voltage is staying around 2.8V which from what I’ve read seems to be fine. Presumably that means the BMS hasn’t exploded yet. This leads me to believe that it could be the switch itself that’s broken, unless anyone has any other ideas.

Also, I took apart the charger jack and found out which ports were positive and negative. I’ve never seen that BMS with an e-switch. I have the same one, but use a separate anti-spark switch instead

PS. You could have figured out the pos/neg terminals on your charger, without taking it apart, by using your multimeter. A positive voltage reading between two pins means you have correctly identified the (+) and (-) pins. A negative voltage reading means they need to be flipped. No connection, or “0L”, means one of the pins is not used

Ohhh good point I hadn’t thought of that

But yeah if I can’t figure out what’s going on I’ll probably end up using an anti-spark. Its a switch just like in a car to start the motor. but DONT let the switch all the time on.

Hmmm, so would I still need to do that if I somehow bypassed the switch on the board and used an anti spark instead?

Cool discussion… I would have initially suggested to connect the 2pins the ‘smart switch’ is connected to… but @Fabian287 has even more knowledge… and I didnt know the thing about mosfets he mentioned… something totally new.