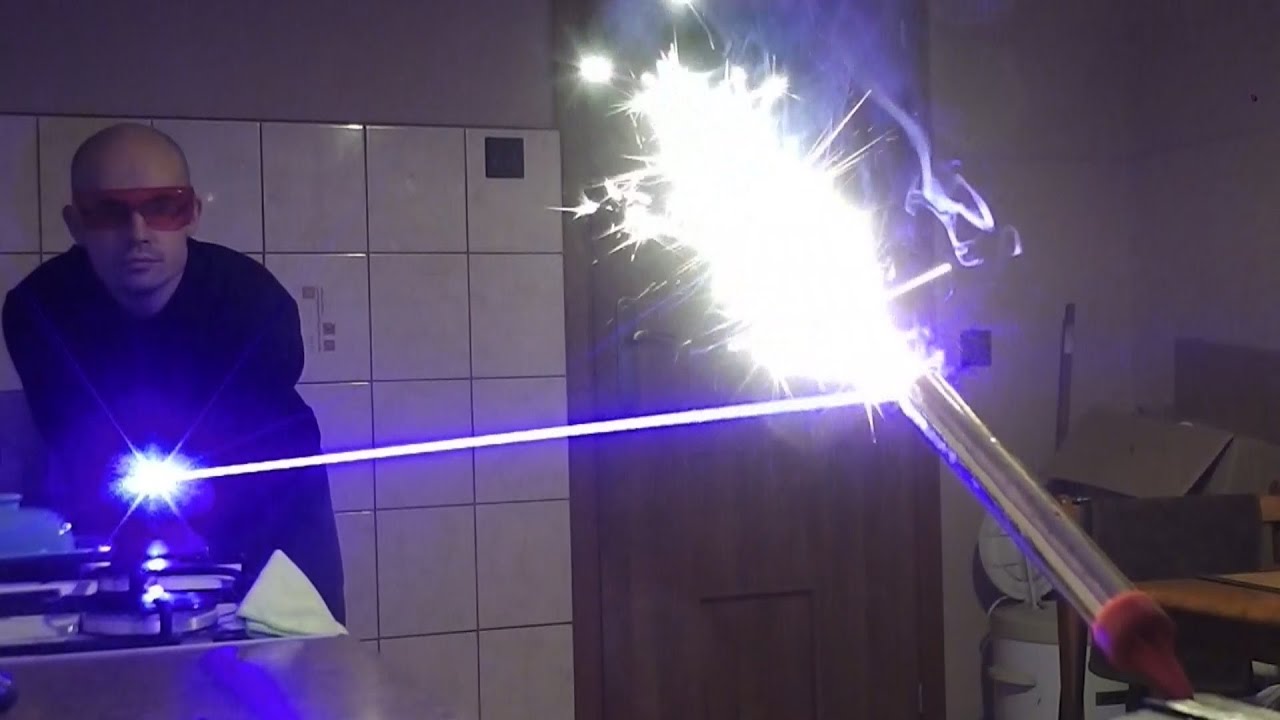 I just saw a pretty sweet board with a high powered laser attached to the front.

I don’t want to sound like a naysayer. The kid in me loves lasers and would have only dreamed to be able to mount a laser to the front of an electric board.

However…this isn’t some weak $5 laser pointer, but a high wattage laser that can instantly blind someone if the beam hits their eyes, whether directly or through an unintentional reflection. A 100 milliwatt laser can cause instant blindness. I don’t know the exact wattage of the laser I saw, but the beam was visible in air, so that’s already a laser in the 1-10 watts range, or 10-100x times more powerful than a laser that can cause instant blindness.

The higher the wattage, the more reflected beams becomes a danger. And its impossible to predict how a beam is going to reflect as you’re riding down the street. Or if you’re cresting over a hill, your ground level laser could shine directly into someone’s eyes.

I can’t stop anyone from mounting a class 4 laser on their board. But as cool as it looks, please reconsider this. You can seriously hurt someone doing this. And if you think helmet regulations are pain - wait until someone is caught blinding people with their laser mounted eskate.

Yeah I get it. Its like real life fucking Tron. And if it weren’t so dangerous, I’d mount 2 or 3 of those in a heart beat. But those high power lasers can go for miles and miles. If your street or side walk has even a slight incline that crests, that means the beam could easily be eye level or higher after a few hundred feet and hit people, buildings, cars, whatever.

@Toughook thats your board, yeah?

It looks cool as hell, but it’s also stupid dangerous to bystanders. High-power lasers should be treated with the same respect as a firearm. They look more innocuous, but they’re serious business.

Blue high power laser diodes are getting cheaper which is awesome and also worrying. People can build eye burning, laser weapons for as low as 50$. A hanheld 3.5w blue laser is a WEAPON, in a laser scanner it has a purpose except burning and blinding people. Imagine one second of fooling around and you are blind for LIFE, thats why i quit the hobby and sold all my lasers. There are many horror stories on laser pointer forums. I may still have some diodes laying around…

What about the green ones? It doesnt have to be a 3.5w. Could you achieve a similar affect with something small or less powerful? I jusr like the concept

I think anything with a visible beam in air is going to be at least a class 3 laser, which means you can be instantly blinded. Put it this way, a class 2 laser is considered safe only because the speed with which you can blink, 0.25ms, is fast enough that the laser can’t do permanent damage. But if you stare into a class 2 laser long enough, even that little laser pointer can blind you.

A class 3 laser will cause damage even in a mere 0.25ms. That’s how powerful those are. 1/4 of a second and you’re done. Especially if it hits the eyes of a child that doesn’t know to blink or look away and just stares into it. And the range at which they can do this goes for MILES.

I have firearms, multiple pistols and rifles and I don’t have a high powered laser. They’re cool as fuck, believe me. But once I started researching them, I realized I’d have to take a ton of precautions to use it indoors and I couldn’t ever use it outdoors, so it just wasn’t worth it.

I think the one of the biggest dangers of lasers is that they seem harmless. You can buy a laser pointer at the grocery store and play with your dog with it. Nobody thinks that a more powerful version of it can insta-blind. That the reflected beam can insta blind. That for some of them, merely looking at the dot on the wall or ground can blind you too.

I’d rather take a non-fatal gun shot that I recover from than to be permanently blinded.

I have some experience working with laser safety programs and laser safety controls. Everything said in this thread is spot on. Even class 1 and class 2 lasers are regulated in some form in industry/occupational realm. Class 3R is where you start getting serious. Like @aethyr said… Anything above 3R will blind you instantly. The reflected beam of 3B and 4 lasers, even on a diffuse surface can easily cause blindness… I don’t even want to think what any semi gloss / semi reflective surface will do.

Road signs are meant to reflect light back at you. Riding with a 3B laser on your board pointing forward is dumb. And if it’s a class 4 laser…

I’ll just say, I don’t even want to be in the same room as a class 3 or 4 laser unless it’s in a proper class 1 enclosure. There is a reason they lock these things up in rooms, cordoned off with yellow tape, spinning lights and sirens. Because these things are dangerous af. I’d go with the other guy… I’d rather be shot than have a 3B / 4 laser pointed at my face for even an instant.

As cool as this may look, you might as well be riding around with a fully automatic supressed machine gun that’s constantly firing forward. Even that might be safer to bystanders since they would probably hear the Sonic crack and be able to take cover before it hits them. People are going to want to look at a bright light until they realize they are blind.

So with high powered lasers, is it the actual visible light thats causing eye damage?

I guess it wouldn’t be a laser beam if there was other spectrums mixed in.

Laser stands for light amplification stimulated emission of radiation. So… Technically a laser would be some form of light, visible or near visible spectrum.

Well, yeah. But for the purposes of this thread we’ve been talking about visible lasers.

Visible light isn’t particularly high energy right? So it would be a lot harder to do damage than say… UV wavelengths.

When I say I’d rather be shot with a gun than hit by one of these, then you’d better believe they are high-energy… even if they don’t instantly blind you forever, they will burn your skin wherever they hit you

In that order, the higher the number, the more dangerous. We are talking visible light. That is the spectrum that causes blindness. If you have a 3A or R laser, don’t be dumb with it. If you have a 3B or 4 laser just for fun, you are dumb. 3B and 4 will cause blindness in less than 0.25 seconds, even reflecting. A class 4 laser, even shining on a dull surface, the diffuse radiation will blind you in less than 0.25 seconds.

Laser safety eyewear is available, but it has to be targeted at the frequency spectrum your laser outputs at for it to be effective, with an optical density high enough to work. Look at osha’s website and ansi std z136.7 for details on how to stay safe if you for some reason have a 3B or 4 laser outside of a class 1 enclosure.

I mean high energy in terms of where it is on the spectrum. A photon of microwave energy has a lot less joules than an xray photon.

But I think that still reveals the flaw in my thinking, because a 50mw laser is still 50mw of energy, which is how we rank laser power. So if its 50mw of red light, its a lot just more lower energy photons than a violet laser, which would have fewer higher energy photons, both equaling 50mw.

Ah I see what you are thinking now, and in that sense your thinking isn’t flawed… but you got it. The higher energy photons above UV are in the ionizing radiation category while lasers are nonionizing. Ionizing = cancer and radiation syndrome, while nonionizing = heat, which targets different organs of the body based on the resonant frequency of the body part and the wavelength interacting with that part. The heat in the sclera/cornea from the beam interacting with those organs is what leads to cateracts. I honestly haven’t looked into retinas and blindness much, but I assume because all other nonionizing radiation affects the body via heat, that the blindness comes from your retinas literally being burned.

This is more closely to the aestetic I was refering.