Is anyone using these Maytech esc's?

Many Safety Features such as Current Control and Temperature Control Features

Parameters can be LCD or PC programmable

They are not considered to be reliable compared to Max6 for example.

The term vesc threw me there for a moment. This thing is not vesc based then? 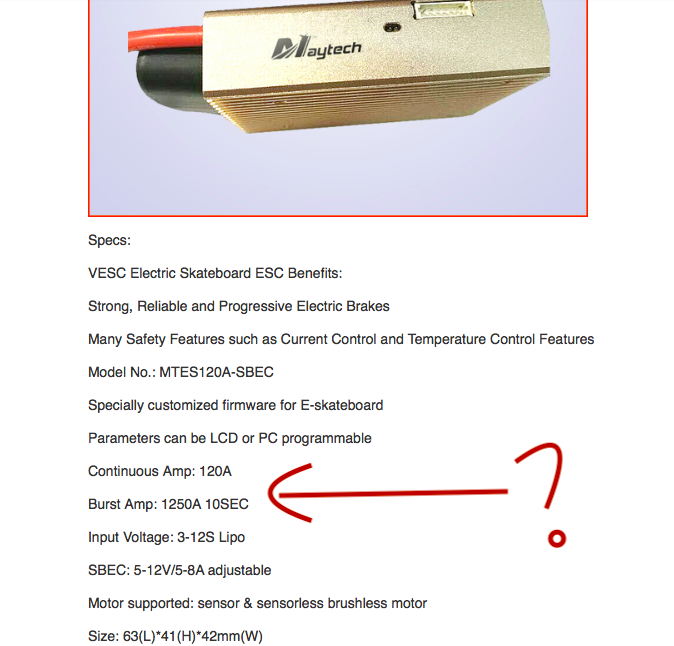 Burst is basically nothing to worry about. Manufacturers never state what bust means 1s,2s,3s? Or 0.1s? On what temp? It’s like burst raring on 18650 batteries. Never trust them or u will see some fireworks.

Just to clarify, This is not VESC based. Not sure why they listed that. This is a version of this: collections/esc-speed-controller/products/torqueboards-12s-120a-car-esc-opto-hv I have blown up 6 of these. If there is any throttle input when you power it on it will fail. Also, the brakes are not very progressive, in my experience. I believe someone had a fix for the brakes, though. https://www.electric-skateboard.builders/t/maytech-12s-esc-new-firmware-to-fix-the-brakes/13545

@mccloed yeah thanks for the input, once I read the programming specs it became clear. I have used rc esc’s before and yeah never again scary shit

Not sure what the hate is about. I and many others have been using these daily in very harsh conditions. I go offloading very often uphill in soft mud. test vesc 6 in those conditions it almost burned out. Im still using the same 2 for 2 years almost. np at all.

About the brakes you need the new firmware i posted a while back. Then you need to play with the trim and other knobs on the gt2b remote.

And yes believe the burst rating. This is the most powerful esc you can put on ur board. this will shit on vesc 6 any day in terms of torque. I pushed the accelerator down too much yesterday, popped a sick wheelie and then my front footstrap snapped off. Imagine that torque.

Ask @Nate or @Kaly he can confirm. The way @Nate rides, he burned too many vesc to count. and then always goes back to this ESC.

You have to run these unsensored. I’ve confirm, through two of my own fvt esc, that sensored on these are almost impossible to control. I blew up two esc, in the span of 15 mins test, unloaded. But to be fair I was running them on 8085 motors so take it with a grain of salt.

The difference between these and vesc is torque. If you’re a torque addict, of which I am, these are amazing. I can pop wheelies with a slight push of a throttle on Trampa’s deck. You won’t be able to duplicate that torque sensation on any iteration of the vesc, and I own every iteration of vesc on the market. But what these fvt esc lacks though, are flexibility. You can do more on the vesc and comparatively speaking, it’s a lot of reliable than fvt, not that fvt have a bad rep for reliability issue.

And another advantage, it’s far more cheaper. But if you’re a beginner, or don’t have any intention of using bindings, just stick with the vesc.

This is true, I have a graveyard of vesc and other esc. I forgot to mention another huge advantage; this esc rarely has any cut outs, even when the battery pack is full. I’m not sure why but that’s what won me over the vesc. I’ve been using this esc with my current pack for more than 2 years and it’s still going strong. Only recently did my 12s6p pack started sagging but all in all these esc are good

I can wheelie on vesc too. U just need to push more amp with good cooling. I recently put 12s 100amp on 6370 motor and it just pop the front I had to take it down to 50a to make it manageable. I def not want that.

Advantage of using esc like this is u get insane torq on any KV motors but I found it is hard to tame it not the most pleasant thing.

i’m actually pushing 70 on the ESCape right now. about to chunk it up because I’m testing @3DServisas 1:5 drive on 6374 149kvs 12s lipos. The best way to describe the difference between vesc and these is vesc pushes you on your rear legs, firmly and strongly while fvt esc pulls you by your front feet and doesn’t really give a shit about your safety.

Maybe its not for you, but this esc combine with 8085 motors is really fun for me, i don’t have any “death wish” but having the ability pop wheelies is just a completely different sensation from riding fast. They both have their usage, but overall i use fvt as my everyday ride, its just more fun.

I totally get that. Torque feeling really good. I can prob get away with some twicks and gt2b remote. Maybe with bindings and full size board I can pull more amp out. But I’m looking for everyday driver. Something more relax XD You r right car esc does not give a fuk about u. It’s go hard go home. I have all terr wheels dusting around so I might try with those

@telnoi is this just a version of that dual esc? @onepunchboard those 12s settings can you clarify those settings per motor and the spec of the battery?

Yeah I just put 100motor amp and bat was 30q 12s4p it’s was really stupid amount of torq u geta bit less than motor 5k watts per motor. It’s on focbox so it’s not as fragile as chinesium vesc

@Mikeomania12 no hate from me just interested, I mean vescs are popping all over the place and if you can run 100 amps through one of these then at normal vesc settings they should be bullet proof. My quality car escs are cc mamba max etc are so why not vesc?

What was your battery max per motor? I have a 12s4p 30q coming soon so am looking at options for control without frying any more bloody vescs lol