Hey guys, having some trouble mounting my tb 6374 motor on my Evo falcon using torque boards mount. It is either too close to the board or too close to the ground. Beyond adding a ton of spacer to the trucks is there anything else I can do? I don’t think I want a reverse mount but if it’s the only way I’ll consider it. Thanks

Are you using a riser at all? Post some pics, that will give us more info and maybe someone will be able to spot a solution.

Ok guys here we all have a chance to create a product just for eSk8! For those that are not up to speed, let me give you a quick run-down 🚀 As per @Alphamail’s topic: As per the topic Brad has offered to make us a custom eSk8 tunnel riser for $15...

Is that all? That doesn’t seem bad. I assumed it would need a ton more to get enough clearance to steer

I had the same issue with my last board that was a drop through deck. I ended up filing down the truck so I could rotate it just a hair down since the motor was hitting the top of the deck. Its possible to fit just A LOT of work.

I’ve literally just run into this issue with my Falcon, made worse by the curve of my enclosure.

I feel like a lot of us are doing this build. It would be cool if torqueboards could make a mount that has the slots clocked slightly different for us

50 here, there’s just no feasible room to mount my motor inside I fear, even with a short mount. I really didn’t want to mount it out the back but I don’t think I’ve got a choice.

Mount is from street wing and enclosure from @Eboosted 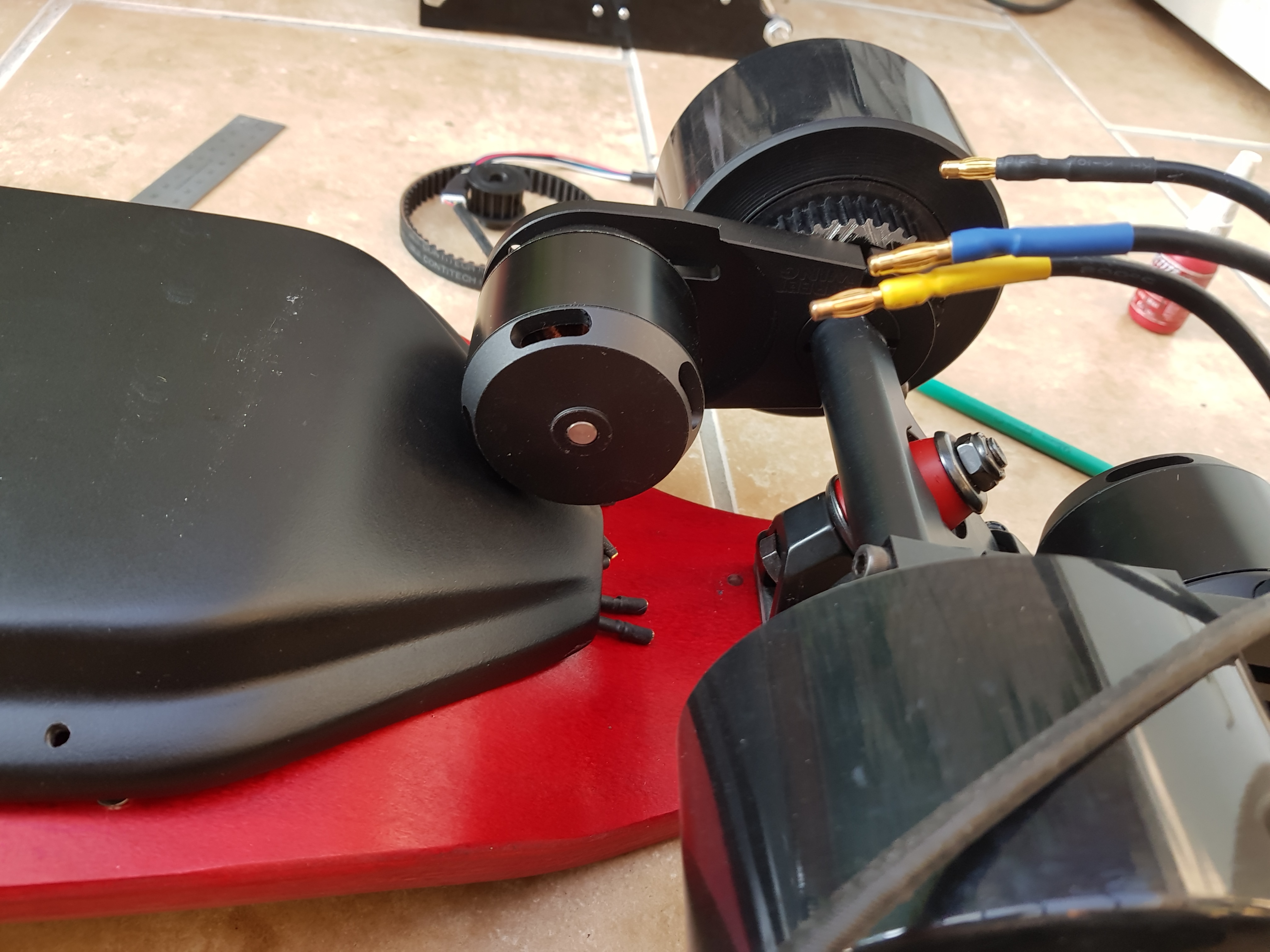 So the next question is, whats the shortest mount you can put on a caliber truck with 107’s and whats a slightly longer mount that will clear the kingpin to rear mount?

Mine sit too long inside and just too short outside. Quite frustrating!

Stuck 12mm belts between the board and front and rear truck. Looks like a half inch riser might be exactly what I need for clearance. Thanks guys

Don’t be tempted by a wedge it would defeat the object of that deck design. straight halfy should do it.

I ended up buying a reverse mount. 1/2 riser on 44 caliber 2 worked until I added my eboosted enclosure.

The eboosted enclosure is a thing of beauty though and aesthetically reverse mounts look fantastic. Mine has dual reverse and looks great but I have to be so careful putting it down etc. Also did you get the tb reverse?

Just mocked up for now, still building my 10s4p lg hg2 pack. Trying to do it right with bus bar and cell fusing and welding so it’s taking a bit. I may try a 340 or 350mm belt to push the motor even farther back. The tb 320 is on the shorter side for the reverse mount

Single drive I was going to say to brace it if it was dual because they flex a fair bit. Make sure the clamp is properly torqued up. Really tighten up those grub screws. Make sure its pulled into the D real snug and it will stay tight. locktite the screws too. Unless you have the new 2 piece clamp and in which case ignore my ramblings lol