Got the box from DIYelectricskateboards.com the other day with the new extended Caliber II clones.

Right away i can see they are clones and a few things i wanted to change out: 1 - Bushings (this isn’t unique to clones - i’m 265lbs/120kg so always upgrade to good high rebound from Venom, Blood Orange, Riptide, etc.) 2 - base plate. Because i notice it was a bit bigger than Caliber II’s, and i was able to swap it. 1137×853
(i had a similar issue w/ an old set of Paris trucks on my previous e-GBomb and had to grind - so just swapped some legit Caliber II baseplates in) 3 - unfortunately - they are thicker than legit Caliber II’s - so get ready to file your motor mount clamp! OR if you are an esk8 hoarder such as myself - bust out an old set of DIYes v2 mounts (the modular ones that are a bit fiddly) PERFECT!!! (i also filed another mount, but like the v2’s for these as they just work and are all “stealth” black!)

Next - the extra extra long 8mm axles sticking out… ??? I guess this is for folks who have Enertion’s injected molded wheel gear, or similar from Evolve and others w/ the bearing in it (where you typically need to cut your hanger to fit). I did some measuring, and stacked speed rings to see how far i needed to push it out to get a couple threads engaged in the nylon in my low-profile nylock axle nut. 13-15mm was good from what i found. (Skipping ahead to later this evening - i made some 15mm spacers from an old piece of 8mm ID CF tube i had from a previous project (axle spacers for my Marbel). AND - being adventurous i had to try my set of 107mm Electric Flywheels… Super super super close w/ 15mm belt! I’ll try it eventually.

107mm Electric Flywheels look like a slam dunk w/ DIYes 12mm 40t gears though! I’m ordering some longer m6 bolts to fit properly, but here’s the 15mm gear setup on both sides - one w/ 97mm Flywheel, the other w/ the monster 107mm e-fly’s! I’ll get another pic with dual e-fly’s and 12mm belts to confirm there’s enough room!

And quick shout out to @torqueboards for the fast shipping and thanks for making these available!! And @Titoxd10001 for the 15mm wide 40t gears!

Can you space out the 107mm wheels from the inner side of the trucks to run 15mm pulleys?

Welcome to the107mm e-fly’s club. You beat me to the punch with the dual set-up. Nice having spare parts to try different combos

Can you space out the 107mm wheels from the inner side of the trucks to run 15mm pulleys?

That’s exactly what i was trying to do. I have half of the truck pictured mocked up like this… it’s super close and might work. I have my low-profile axle nuts (nothing special - what @Torque sends w/ the trucks) - with them flush on the end - so not much “more” room to push the wheel out. I guess i could flip the nut so nylock is on the inside against the bearing instead of outside - give you another thread or two room?

BUT it might fit even without further modification. I need to swap gears on the other wheel to 15mm @Titoxd10001 pulley to finish testing. It’s really really close - sometimes it looks like it might fit, other times i think the motors would touch if not. You can also see this is just mocked up w/o the wheel gear being secured properly - i have some longer m5 and m6 bolts on order to use the outside washer to secure it properly. I think both were 50mm long thread and ordered some 70mm thread after measuring. I think 75mm would be perfect - but we’ll see if 70mm works (pretty sure it will).

@Namasaki - thanks for the link to these! at 10 cents each - those would be a ton cheaper and easier. I had the CF tube, so it was easy to make my own exactly to the length needed. I originally was going to do 14mm, but figured every mm would help if i wanted the bigger e-fly’s. 14mm (or even 13mm) would be better for running 97’s or smaller - more threads extended through the nylock nut.

Project day Sunday for motorcycles - oil change and other fun. I’ll try to get back to testing the dual 6374 w/ 107mm e-fly’s later or this week…

Hope this helps someone thinking about the new longer trucks, and options how they want to set them up!

No luck w/ the dual 107mm e-flywheels and 15mm belts on these. I didn’t force them as they already were touching (mocked up and not tightened down to the clamp). Ran them *super tight" between the mount and gear: 640×853
(great trick i picked up from @whitepony or @okp (can’t recall exactly) for ronin mount epoxy - remove the speedrings so that the wheel/gear touches the mount to ensure alignment, then space out minimally and it’s true).

I think i’m gonna get me a pair of these trucks…that right there looks freaking awesome!

Got them a few years back after seeing @cdn setup with them. Heavy suckers, but the new extended 218mm trucks really made these a possibility for me.

things are hard to find now… and stupid expensive (like all the bigger flywheels lately). Used to be much more reasonable.

Where are those mounts from?

Thanks @Namasaki - i wanted to caution that these are soooo tight to fit dual 6374 and e-fly’s - the mount is really important. Just a few mm thicker, or with bolts that don’t let you run the gears as close to mount… and it wouldn’t fit!

These are v2/v3 modular mounts from DIYes. Glad i had an extra pair before he went to the simpler v4 mounts. I’m not sure if the v4 mounts will work like this or not for dual big motors/big wheels. I know the v4 mounts will fit w/ some filing, or you can reach out to @torqueboards and buy a discounted clamp that will work (i think he said $15 ea).

The newest version of the TB V4 mount plates have recesses cut to hide the bolt heads below the surface of the plate. Good looking precisions there @Namasaki! Made by???

Yeah, i know they are recessed on v4. I have a few others which are not so just mentioning it so folks don’t assume they can run the same setup. It’s close enough that anything not quite right will make the dual 6374/e-flywheels not fit.

I meant to test the v4 mounts, but got lazy… PLUS didn’t want to ruin the clamp for a regular Caliber II by filing it to fit the 218mm clone’s larger axle profile.

They are Liquid Trucks. Made in California by the same peeps who make Abec11 wheels. They are marked as Sold Out on their website but they are not really sold out, they are built to order with a variety of hanger lengths and base plate angles. You can get their phone number off the website and order them by phone. http://www.sk8trip.com/mm5/merchant.mvc?Screen=CTGY&Store_Code=S&Category_Code=trucks

Well hopefully it’ll be easier to acquire now that abec 11 will be making these babys. 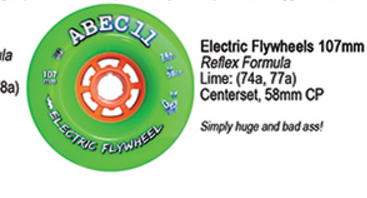 oh my bad then. Also has anyone tried Bigfoot wheels? Either the 90mms or the 97mms? Because they are cheaper and are also in stock as opposed to the abec 11s.

They’re likely clones if they are much cheaper, but should work fine… ABeC has some new offset 107mm coming soon for esk8s. “Superflywheel” they are called