I have recently finished my board and have test ridden it briefly. i have made a 10s3p samsung 30q pack with an 80A bestech bms and a hobyking VESC. i have the max current as 45A on the vesc and the soft voltage cutoff enabled on the vesc.

however if i stop accelerating the percentage rises and im still able to brake. there is no red light on the vesc so i dont think there is a fault.

could it be the voltage cutoff on the vesc. (could i lower the cutoff voltage and rely on my bms??) or maybe my max current. Im able to switch my board back on and everything works, except it will cut off on acceleration again, Im guessing it is not a hardware fault but a software fault.

any help would be much appreciated.

Maybe you can show your VESC settings

It is possible to set the voltage cut off lower, i had the same thing with not being able to accelerate but having the brakes.

ok. will check now. shall i show you the baterry settings and motor settings?

The cut off voltages are most important, but you can show them all

i thought that the max discharge from each cell was 15A so 45A when in parallel???

In actuality they can do 20a per cell

And your gear ratio seems to be fine

where did you buy your cells from? you sure they are not fake cells?

did you check your battery and vesc connectors? If there is a bad solder join or the xt plug is not plugged fully that can happen.

is it a single drive board? I can´t see that out of your explanation. 45A for bat max is already a lot for a hk vesc. Does the cut out come directly from the beginning if you accelerate hard, or only after some minute of driving?

I bought my cells from NKON. im sure they are real cells. all connections are fine, and the electronics are fine when im lightly accelerating. it is a single drive. it cuts off after a few seconds. 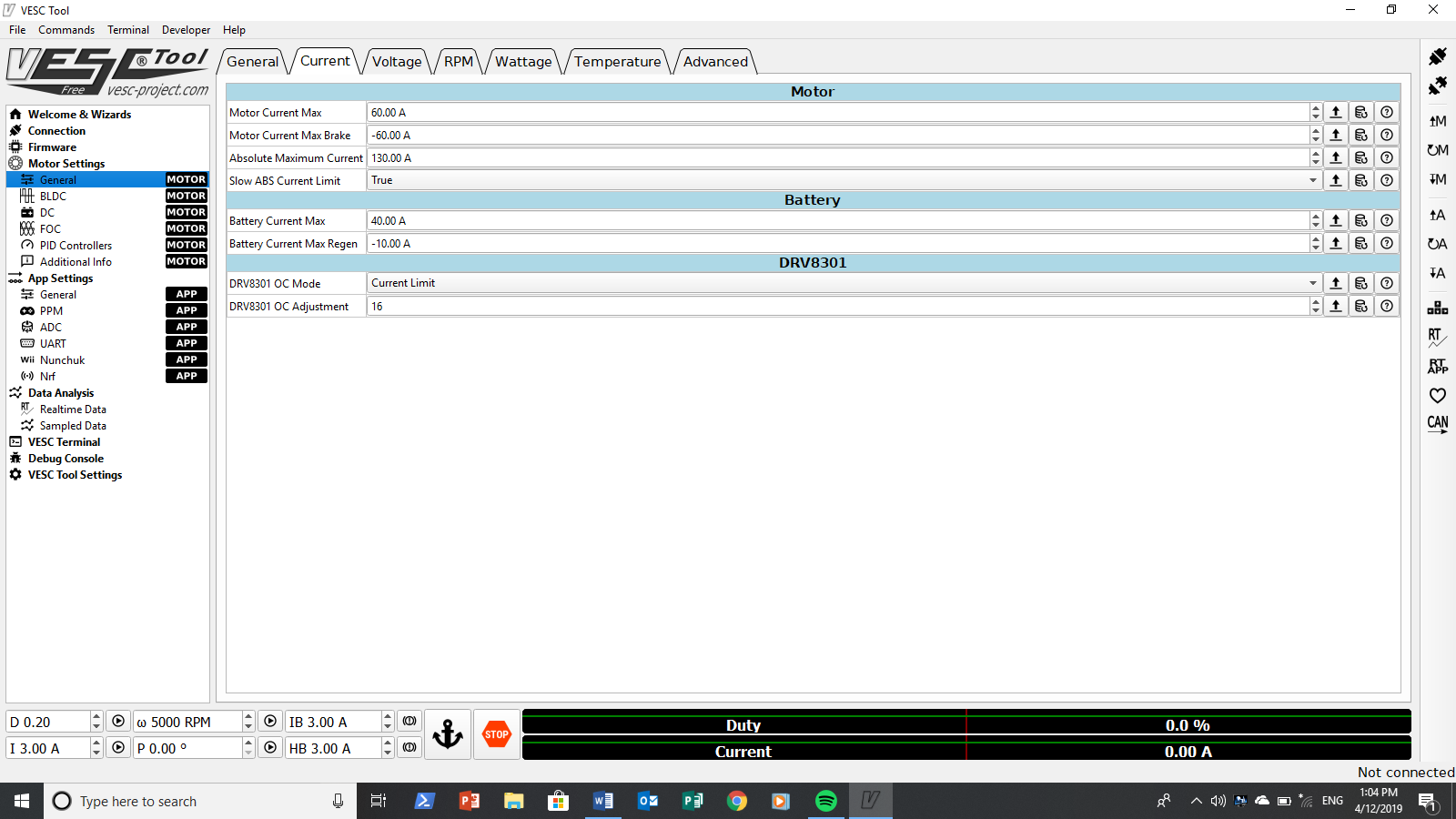 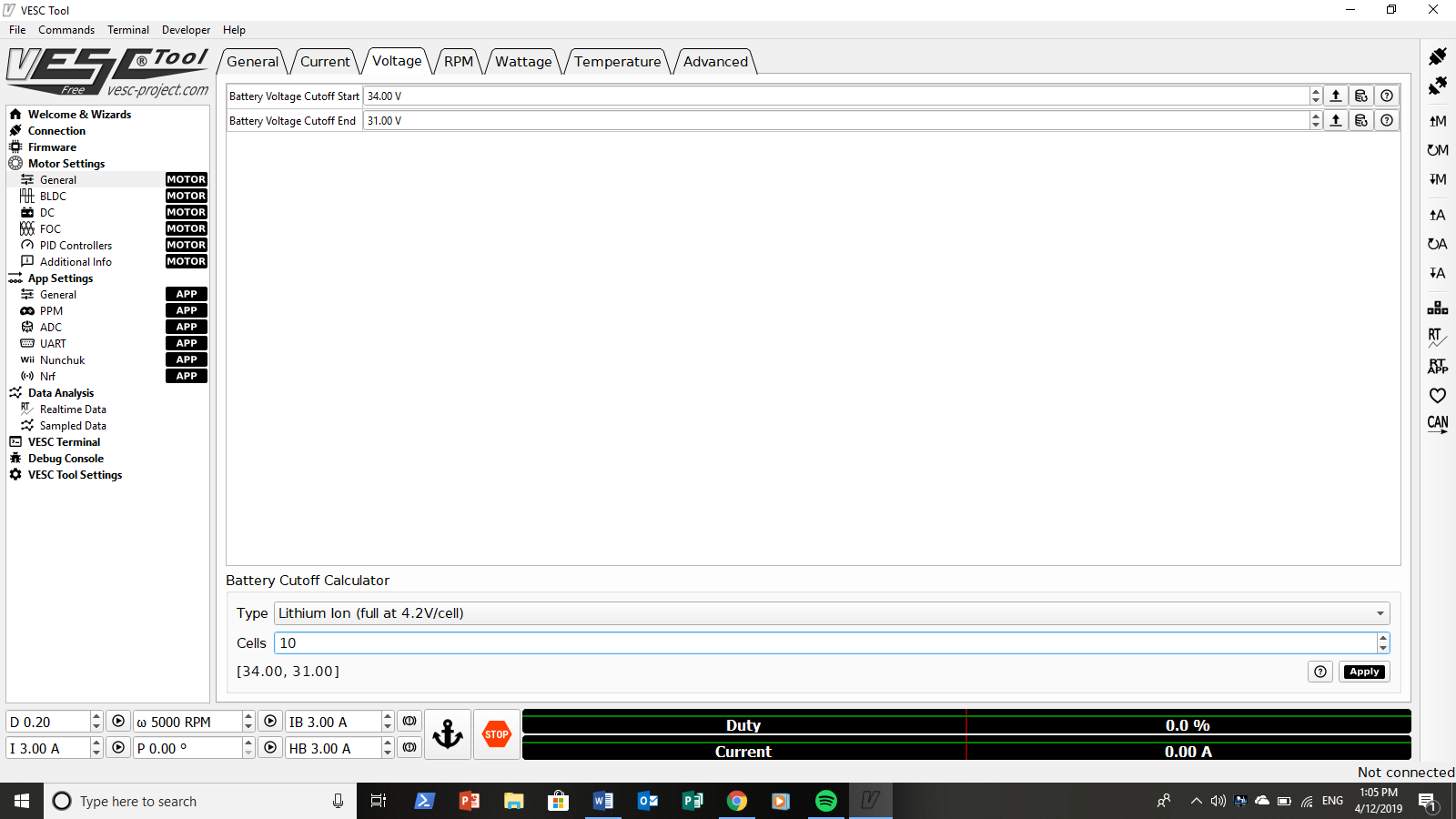 here are my VESC settings

does that happen only if you stand on the board or also without load. like you lift up the deck and accelerate fully.

it only happens when i am on the board. i tried doing it without load and it was fine

Settings also, but i wouldn´t go higher than 35A batt max. try with 30A and look if it get better.

by making the cut off lower would that not make it more likely to cut out? Im a bit of a noob

I mean you should set the battery max value down to 30A. That means that your vesc is limited to 30A current draw which result in less heat on your controler. He just doesn´t draw more than 30A from your battery.

ok, i will give that a go later. do i had only been riding back and forth on my road for a couple of minutes. do you think it would have got that hot quickly?

Usually the over temp protection just cut down your power output, so you feel that the acceleration will become less like the battery cut off does as well. It shouldn´t be a total shut down like in your case, but well it´s worth a try and in general not wrong to set the limit like this on this VESC.

I understand now. So I should decrease the current to 30A to stop the over temp?? Anything else I can do to combat this?

air flow around the vesc or bigger heat sink helps as well.

If you would have a bluetooth module we could log your ride and look what was the reason. It doesn´t need to be overtemp. I guess it´s more likely something else.