Reminds me of @longhairedboy’s press LoL

His was a heavy inspiration to this. But this is just a lot less beefy.

It will take lot of work to make it, but it is deffinitey doable

I have made one few years ago, but it was much easier, i didnt use the Bottle Jacks…

Make sure that the frame will endure

Looks like a pallet. Simple and small designs are the best.

A bar which operates both jack handles simulatenously, nice work simple yet effective

I was about to say that :). I was thinking x2 pieces of 1in thick wall conduit. Use a pipe bender to make an angle on each piece so they meat in the middle, then drill and bolt in 3 or 4 places on the handle, maybe wrap in tennis racket grip for comfort.

I don’t quite understand… 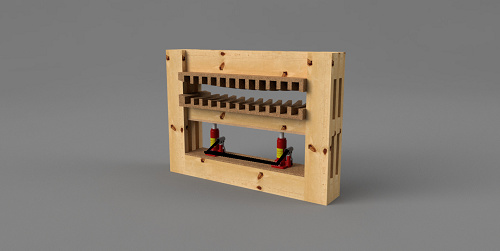 Should be no problem

bonus points for reusing the handles each jack came with

Are you planning to make a one-off deck or to manufacture? Have you already made your mold?

Years ago, I used to manufacture snowboards. At the time, there were only a handful of companies using converted snow ski presses. I developed several processes including a press similar to the configuration you posted.

The process that worked the best for me was a pressure bag system. On a snowboard, the bottom surface, that rides against the snow, is the most critical. I used my bottom molds as before, except the top molds were no longer critical. I made new top molds to incorporate clearance for an air bag. Then a polished piece of 22 gage aluminum was placed between the air bag and the snowboard. The actual mold surface in contact with the resin/fiber matrix was the polished aluminum.

You can make the air bag out of waterbed mattress material. I incorporated a schrader valve into my air bag so that it could be pressurized. Initially I used a tire chuck to arrive at my ideal pressure of 12PSI.

Too much pressure and too much resin was pushed out causing a dry laminate. Not enough pressure results voids and a resin-rich laminate.

You will need a substantial structure to support the force of the air bag pushing the mold open. 12PSI doesn’t sound like much, but assuming an 8" deck width for your 36" deck, that’s 3,456 pounds of force that your press structure needs to support (Force=Pressure*Area).

This will by no means produce a perfect fiberglass composite material which isn’t even needed for any kind of longboard. The press I made with one of my teachers a few years ago had less support material and still withstood enough pressure to produce a high-quality deck. The decks which that press produced were still extremely strong.

*by the way, I really appreciate your input. Expect me to ask questions, you’re the exact kinda guy I need

Just trying to present options. I also try to do things better every time I do them.

With that being said…

I’m not a fan of wood screws. I would through-bolt it.

What I think is important in building a structure like pictured:

The vertical beams beams will be in tension, but will experience a bending force as the horizontal beams start to deflect. The deflection of the vertical beams doesn’t concern me as much as the loads transferred from the fasteners into vertical beams. This load is parallel to the wood grain. My concern is that the wood will split.

The composites will take the form of any shape in which they are supported in during the curing process. Any distortion of the press will allow distortion of the mold. All the time spent building accuracy into your molds will be lost if everything flexes and distorts in use. Ultimately, maintaining the shape of the mold is most important to me.

For assembly, I would glue and bolt everything together. Use a lot of Titebond III wood glue on every joint that doesn’t need to move. Make sure that the entire surface is covered with glue. After the joint is made, the excess glue is easily cleaned up with a wet towel. It is better to have excess glue squeeze out than it is to have voids. Lightly clamp everything together so you don’t squeeze out too much of the wood glue.

I believe it would work best to drill and install the fasteners after the glue has cured. I would use 1/2" (12mm) minimum, 5/8" (16mm) preferred, bolts with a shoulder long enough to pass almost all the way through all five beams. I wouldn’t be the least bit upset if you opted for 3/4" (20mm) bolts. I’m suggesting these large sizes, not for load bearing purposes, but for support against the inside of the hole drilled through the beams. Surface area is the key here. The smaller the fasteners, the easier the wood will split.

Try to drill the holes to achieve as tight a fit with the bolts as possible. Lastly, I would apply ample amount of wood glue or even resin inside the bolt holes upon assembly of the fasteners. This is to provide maximum surface contact between the wood and fasteners. Apply multiple coats to account for absorption.

I would try to avoid using fully-threaded bolts or all-thread, threads do not make a good load bearing surface. If that is all that is available, you can install steel tubing as the load bearing surface and pass the fasteners through the tube to provide clamping force only.

Good luck with your build, let me know if I can help.

Thank you so much for the advice. I’ll be sure to use lug nuts instead of screws. The only problem is that I don’t have an 8" drill to drill through 5 layers of 2x6.

I think I’ll skip out on this part. If any two ribs share a profile, you can cut just one out. Temporarily screw the rib you just cut out to the next one and use a router with a follower bit to ensure that they are exactly the same. This works really well with decent plywood, hardwood, or MDF. If you use plywood and it has voids, then I would not use this method as the follower bearing could go into a void. This is how I constructed the ribs for my press and it held up really well for ~60-70 decks.