I never liked the idea of placing electronics in pelican boxes (although I can understand why) so when I first saw builds of mountainboards with flexible underslung enclosures (like the LaCroix) I was hooked… But I neither had the space, time nor skills to build a flexible enclosure.

So when Alex & Pat from LaCroix decided to start selling their Prototipo deck with enclosure at a discounted introductory price, I jumped in for the ride!

From ordering to delivery took a few months, so I had a lot of time to gather up my parts and get ready for the eventual build and my goodness it was the longest build I have ever done. This is the 5th esk8 I have built and none of the others compares to how much work this was… (FYI, I have 3 working boards now, each for a different purpose, this is for the occasional offroad experience, the smallest is a milk run board, the middle is something in between).

Anyway, some folks have asked me to document my build so here it is. Front and back lights are from Banggood and I designed and printed mounts for them to slide onto the MBS Matrix II trucks. STLs are available here for those who want it. IMG201806140258054608×2592 1.22 MB
The LaCroix itself is VERY SPACIOUS inside, fits 12S4P extremely comfortably with the oversized BMS and dual Focboxes. I soldered the 4P packs together using good quality wires instead of nickel strips because firstly I don’t have a spot welder and secondly, nickel itself is not that fantastic a conductor. I heat up the iron to 480degs, pre-tin everything then solder them slowly. I took my time with this, 1 or 2 4P packs a night over several nights. In between 4P packs I use 3 x 16AWG wires for the flex, 12AWG for between battery assembly and ESCs/BMS. IMG201803200128273264×2448 630 KB
Remote is using the DIY Trigger Style Remote with Telemetry I designed based on Solidgeek’s remote. I must say the CF enclosure gives me poorer range than I prefer but still works nonetheless. Discussions on the remote are on the thread linked above. I route the motor cables under the enclosure rather then through it so that should I need to remove the enclosure I can do so completely. I dremeled out a channel, heat shrunk and silicone taped the area where it presses against the enclosure. I then used instamorph to make a little “hood”, I wanted to 3D print it but i got lazy. Of course I painted it black later. The power indicator is just a simple 5v 3 LED PCB I had lying around from my RC quadcopter days. I removed the dip switch, hard wired it for red, then drilled 3 holes, one for each LED. I then used clear hot glue to simultaneously seal and hold the PCB in place. Lastly, I used the 5V from the spare Focbox to power it. I really liked the E-Toxx geared drives but they cost an arm and a leg but more importantly they don’t fit MBS Matrix II trucks, so I had to design my own drive from scratch. Luckily I already had experience from designing a similar style geared drive for my smaller boards, so it was just a matter of upscaling. AT sized boards also have A LOT more space so it wasn’t so critical to get everything sized absolutely perfectly.

FYI, I printed this using PLA 2.0 (from Qwikfab). This is not to be confused with PLA, PLA 2.0 (or some call it PLA+) is stronger than regular PLA and has held up well for now.

And before you ask, yes I intend to share the STLs but only after I have tested the drive a little more. The drive comprises of several parts, the first being the 73T 1.5M 20degree pitch gear attached to an adapter which slides into the MBS Rockstar II hubs. The idea is you can remove the wheel without touching the gears. Also, it’s in 2 different pieces so that I can swap out the gear if I wanted to, and also to provide more strength by using the M6 bolts. I also use a 6806 bearing with an adapter to keep the gear centered around the axis of the truck. The mounts are also 3D printed, slide onto the trucks and held down by an M6 bolt. I desigend them extra chunky because well… it’s no metal mount… The gear interfaces with a cheap 12T spur I found (the only one I found that could fit). This is then encased in a gear cover to keep the lubricant from flying all over the place and prevents grime from building up. The final drive works pretty well so far and looks pretty stealthy, I just need more time to test it. The spurs are not silent but good enough, the key is the meshing (mounting screws allow for slight adjustments) and lubricant (from which I need something thicker that doesn’t get flung off). DSC069251080×1616 360 KB
Griptape wise I was so totally exhausted by the end of the build that I just went with a simple 2 squares of vicious tape leaving a nice square for the LaCroix logo. The geared drives allows the motor mounts to be short enough that I can lean my board against the wall, as well as to drag it around on its back wheels when I am not riding or moving around in very tight spaces.

Here are some other shots of the final build… Can’t wait to ride it more once the weather clears up! Hit me up if you have more questions!

PS: I nicknamed it rolling fortress because it feels so different from my other decks, feels more massive and solid…

An honor to be able to ride this last night. Acceleration is really smooth and quite manageable for a 12s4p. I’m not used to a MTB deck so my legs felt weird when turning. Nonetheless a great… no, an awesome build!

This looks great, especially the drive. I wonder how the motor mounts hold up since this is a problem with my 3d printed drive. Is PLA 2.0 stiffer than regular PLA? I printed mine in PETG.

It’s definitely stronger than PLA and I think in specs even ABS.

Not sure how long they will last though, thus the hold back on STLs just so I can give them enough time to test them.

beautiful, impressive drive system as well…respect. I wish I had gotten in on the lacroix group buy

It’s the perfect dream build for me. Really interested in how the gears turn out. Do you mind ballparking the total cost of the build?

Because I build the battery myself and essentially printed the drive, I spent approximately 1800USD give or take.

Unfortunately I live on the other end of the globe, so shipping was a real pain… could have shaved off 300US just on shipping alone.

Unfortunately I live on the other end of the globe, so shipping was a real pain… could have shaved off 300US just on shipping alone.

I know your pain (sweetened by pack of Haribo), after additional shipping costs I also paid customs that in total exceeded regular price (well, this should make @mmaner feel a little less bad for his poor reflex).

Nevertheless: great build! I really love printed gear idea and would love to see it work reliably as it really bothers me that available solutions cost half a kidney while I’ve already sold one.

I have tortured my other printed gear drive a fair bit and it holds up well enough to abuse. The only wear was when a motor screw dislodged and got caught in the gears… (not fun)

However I don’t go fast, no where near the speeds demons I hear of here. Firstly because my I only have mortal balls as opposed to those of steel. And more importantly the laws here greatly limit electrically driven devices. Failure to adhere will mean they take your board away and destroy it after they charge you in court.

As such for my purposes the printed drive might surffice but not for others needing more durability. 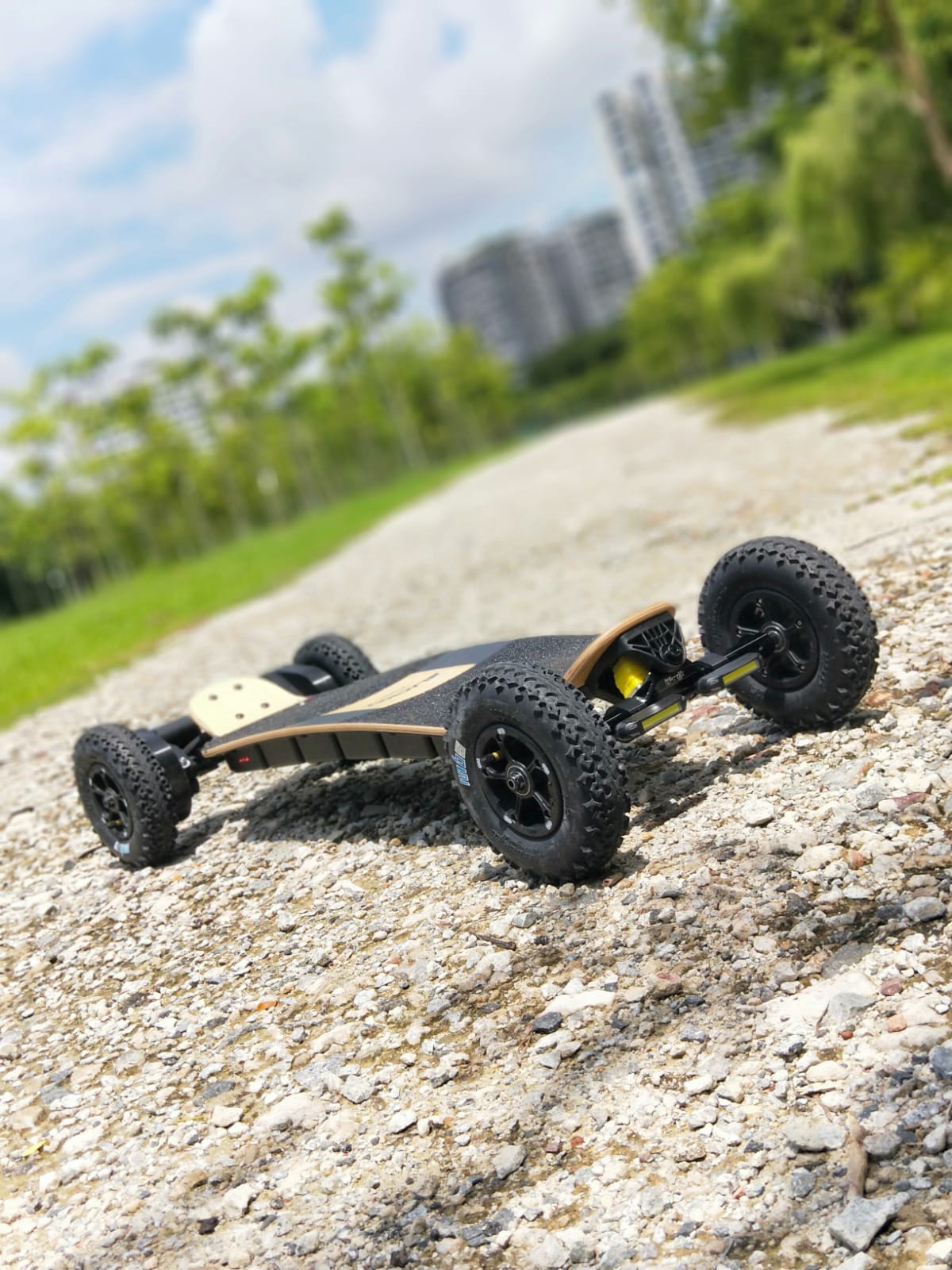 Wow it’s such a weird feeling to be able to ride over this and still keep going!!

Looks like so much fun. How does it carve? Can you slide it on the gravel?

I think the red shock blocks are too stiff… doesn’t carve as well as I hope. Will try swapping them out for something softer…

As for sliding on gravel didn’t try! Wasn’t wearing enough protection to risk getting banged up haha…

More than a little interested in the drive design, what are you going to lube it with? Think @Deckoz was getting a good result with white grease. You can get good ones in marine chandlers. Resists water and very low fling

I tried spray on white lithium and that’s even more runny!

Boat shop suppliers, the white gick used to grease parts that get immersed in water

In a small tub…Deckoz used it to good effect afaik

Something like this, but cheaper in a tub https://www.amazon.co.uk/Johnson-Evinrude-Triple-Guard-Marine-Cartridge/dp/B00R55K544