Sorting out the origins of direct drive

It is you that is wrongly assuming. Of course there’s air pressure coming from the front when youre going forward but it’s not going to go in that hole no mater how much you carve or how big the wheel is or how fast you’re going. that’s the point of contention and an interest of mine and I’ve done a lot of research, experimenting and modeling of different forced air cooling methods

OMG you’re still here? Didn’t I say I will move forward with my design regardless of what you say? Go away dude, I don’t go in any of you’re thread anymore since years ago. But I do notice one thing that hasn’t changed. You’re still all about…

im still here. yea I know you said you’d go forward with it and it sounds like a good idea. the holes seem good. Feel free to come in any thread of mine as its still the same for years and yada yada continues.

But you guys cannot deny the fact that CARVON literally came up with something that is revolutionary.

I’ll deny it. Yuk yuk. Stylez on endless sphere gets no credit?

We didn’t meet never been the fair. But we did talk on the phone long ago. I was excited about the direct drive I was almost done using a tacon160, you were doing something unrelated but interested. It was a disaster design with tiny bearings and I threw it out soon after. And then stylez on endless sphere made a direct drive and it was with a motor that used a large bearing with the fan inside that was different than any other outrunner around. He’d found a motor that was an easy convert and slid right up a lathed hanger. He had good success with it and showed some cool video. We were all awestruck. You started your “”I got a lathe” thread I think it was called and started making motors with that motor and selling them. Converting I think sk3 maybe exactly as stylez had shown how in his guide. That’s how I remember it.

Okay, you’re really pushing it. First off, who was that who told you that what you were doing wasn’t gonna work…that the magnets were gonna “kiss” the stators? Hmm? It was me. And why did I know that…it was because I was doing something similar, with similar Sk3 motors, although it was a friction drive. If you go to sk8norcal’s wackyboards blog, my friction drive board is there. So I know the value of having a big bearing included in the motor because I was using it. If you go to stielz thread, I specifically asked if he was selling it, because I had the same motors and know what it’s capable of. He said he didn’t wanna make one for others, so I continued with my project. End of story…stop being crazy.

I worked my ass from hubmotor designs, to V2 with partial motors out design, to now fully motors out design. That’s a lot of designing and prototyping. I didn’t just grab someone thing, I was already doing it. I just didn’t have the lathe. And once I had it and learned it…boom I could machine the trucks myself…all me. And it wasn’t stielz design, he epoxied the stator while I used a screw to brace it. So stop tripping, you don’t know what you’re saying. 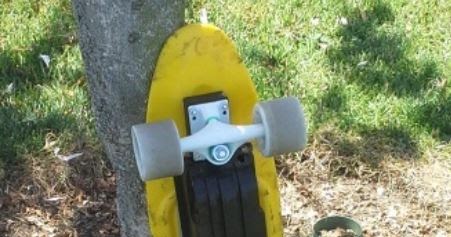 That’s mine, that had an Sk3 motors in it with skirt bearing. I know those motors already.

And it wasn’t stielz design, he epoxied the stator while I used a screw to brace it.

Screw or epoxy I’d hardly say you developed the design out of thin air. Stylez made it, then you, same motors converted. In that order.
Unless you’re saying you were secretly doing it all along and then decided to show it after stylZ. It’s all there to see on endless sphere.

But I was already doing the same thing with the same motor also. In those days, only Sk3 came with skirt bearings…duh. I just didn’t have the lathe. And to let you know, steilz design was a disaster in the making. So I made the hubmotor design better, last longer.

Honestly, I wished I’ve never done hubmotors. It seems like all these years, I’ve only been trying to make them last longer. And this is what I get out of it.

No u weren’t. full of it. Sad because it’s all there to see on sphere. So obvious. But you now want to present you were doing it all before. What a can of it. I won’t waste our time talking about it again. Reminds me of how u freaked out and were threatening me about saying how stylez design, which was yours, was using a 5/16” axle and 8mm bearings and not typical precision way to do a motor.

But no point. Done for real. Just letting it known you did not invent it regardless of what u continue to say. And then say dexter took your idea. Get outta here w that.

… Reminds me of how u freaked out and were threatening me about saying how stylez design, which was yours, was using a 5/16” axle and 8mm bearings and not typical precision way to do a motor.

What in the world are you even saying? Do you even listen to yourself?

Also it stielz you idiot. If you want to point out somebody that you’re accusing me of copying, you could at least get their name right

There was no road map for me, no prior art on how to correctly do it. Then someone just literally grabs the thing you’re working on and runs away with it. Unlike TB, I create my products personally, because I want to personally know if it works, so I’m very invested in it.

I know you guys are fuming at me because of the delays. But you guys cannot deny the fact that CARVON literally came up with something that is revolutionary. And we did it the right way. We did it the hard way.

@oyta when someone makes claims such as this they’re not longer claiming to be innovators, they think they invented something, but far from it and respect due to the real originators.

First stielz shows what he made 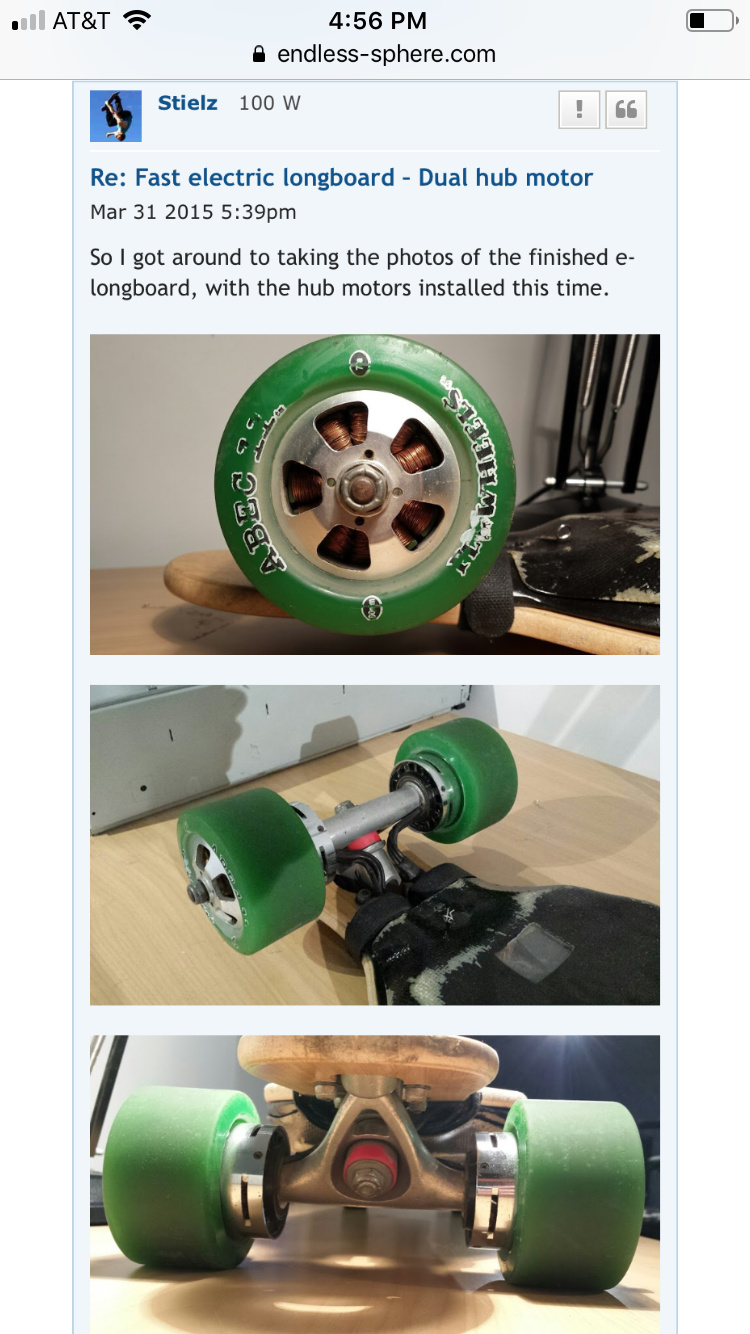 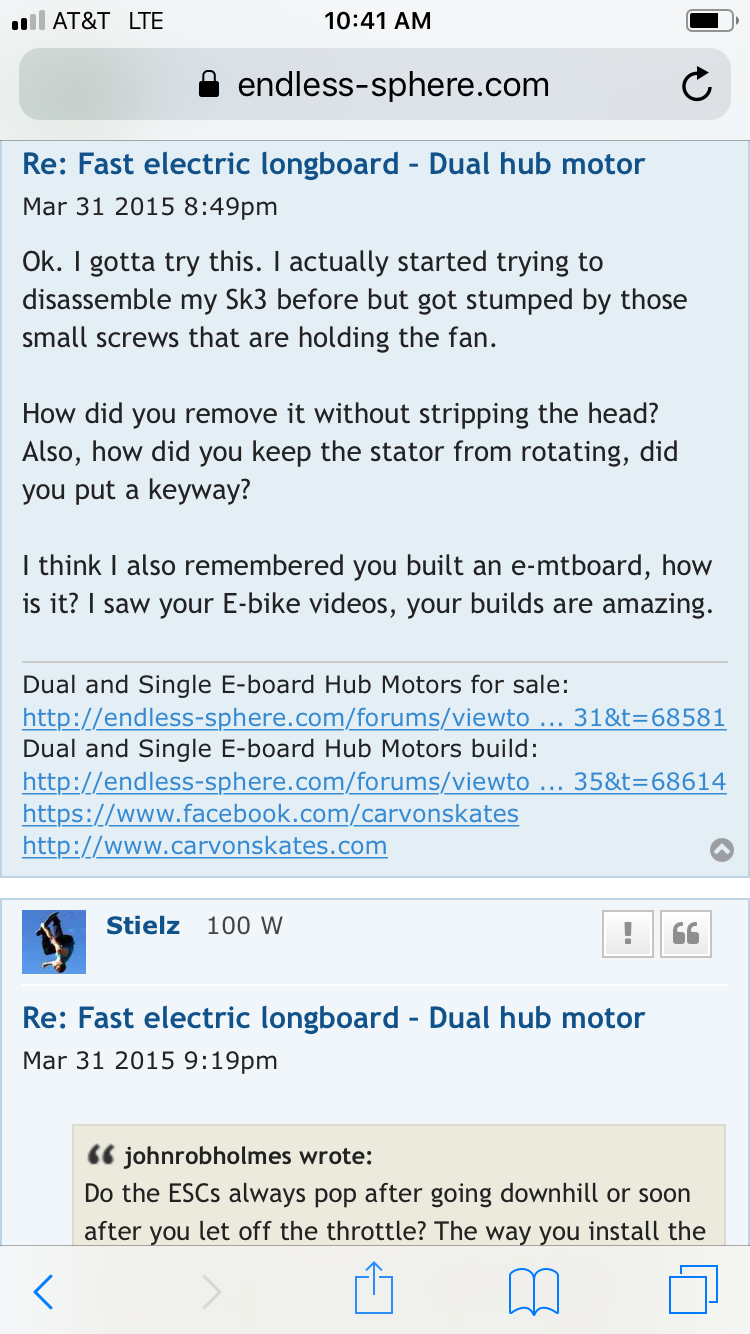 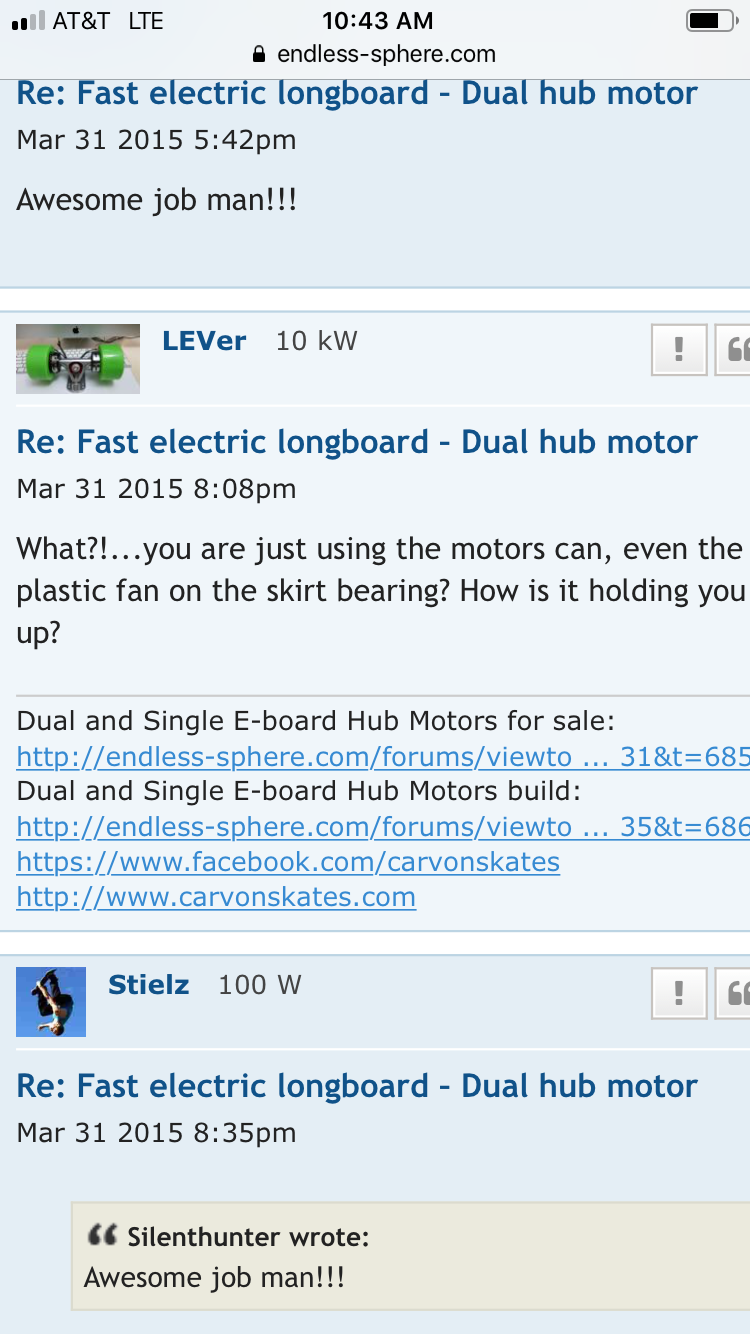 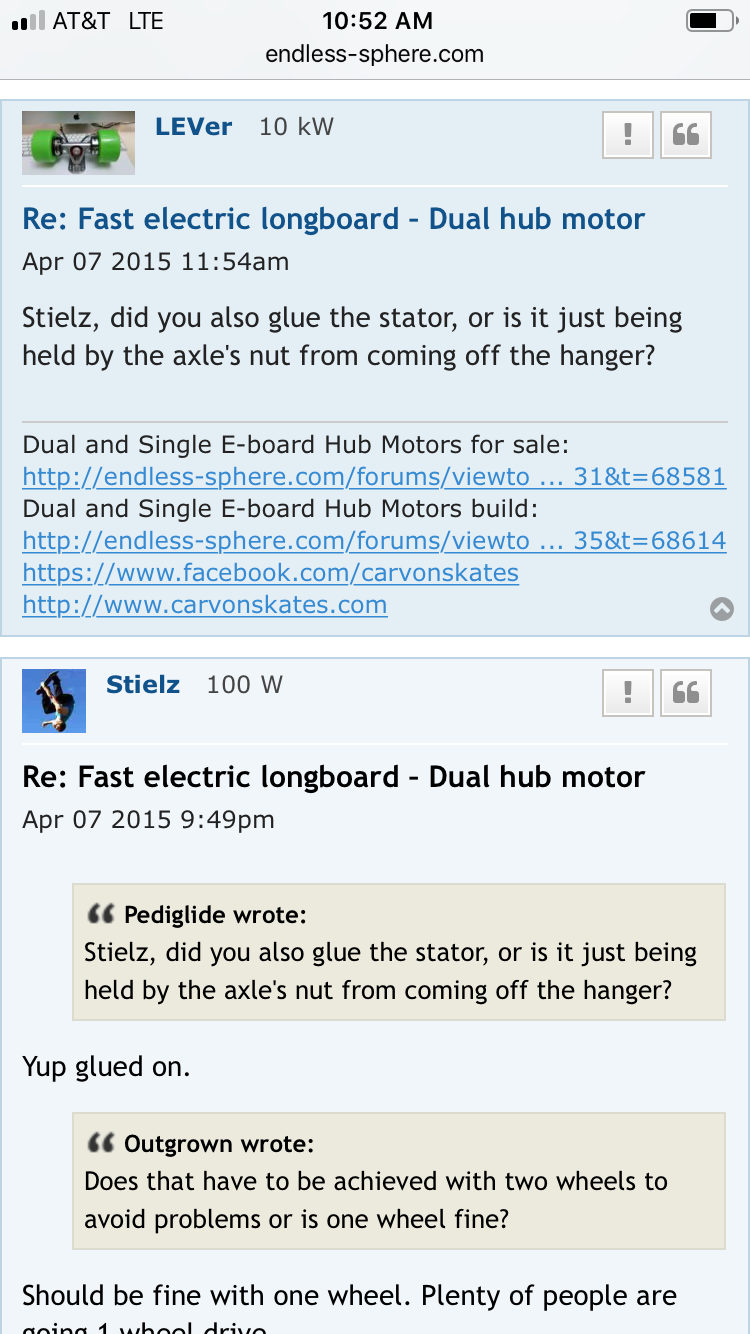 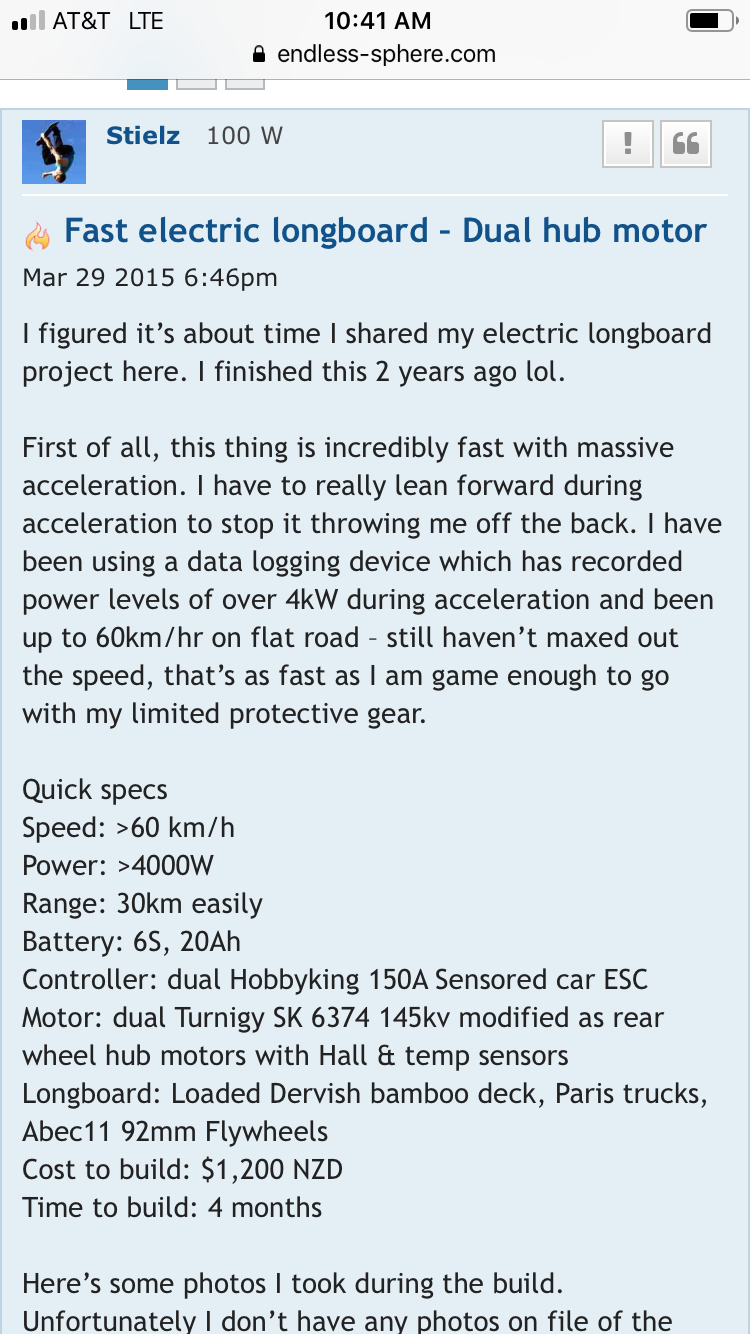 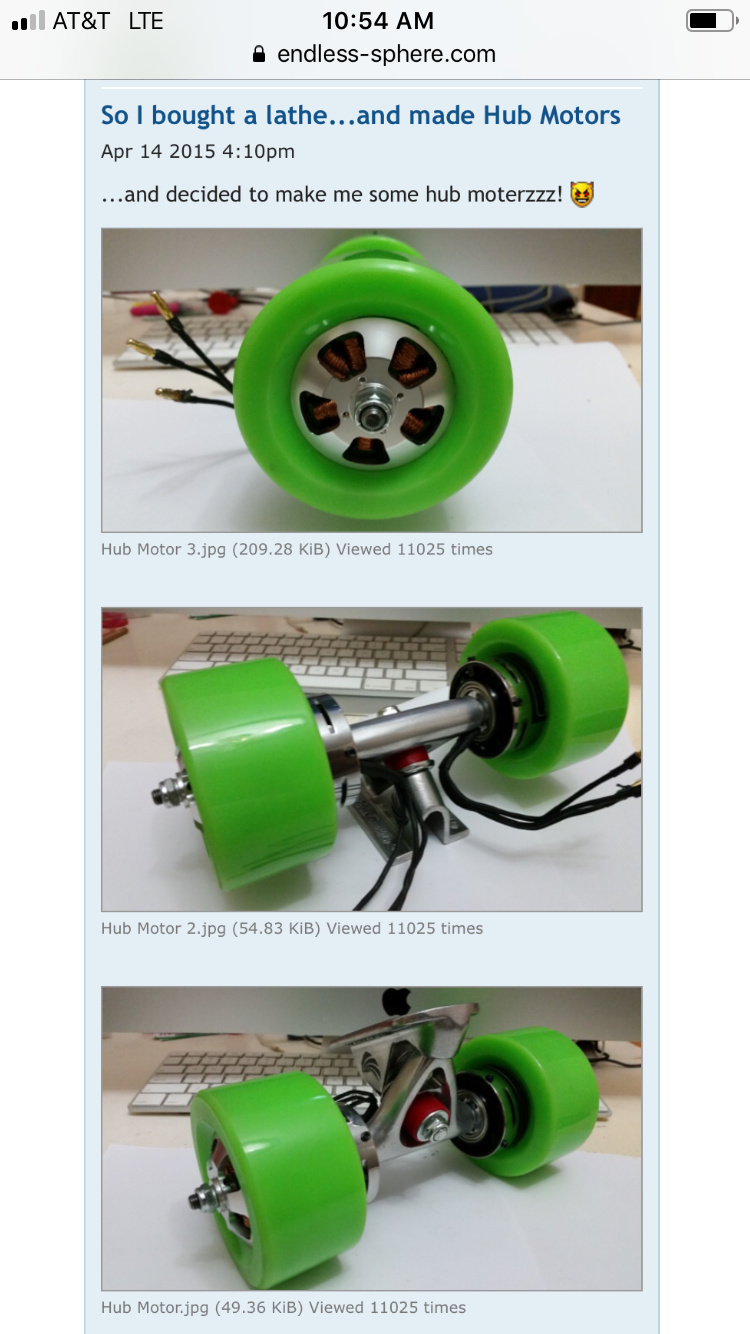 I’m sure you’ve INOVATED since the first design, which fair to say you copied, not that that’s bad, but don’t claim you discovered it or anything like that and I won’t come in correcting

Hummie laying down the chronological law.

I do however find you two and Jason bickering like children while acting as vendors (fair enough Hummie isn’t running a business out of it but still) to be really pathetic.

None of you invented a truck, a wheel or a motor. You moved them around on the truck and it looks like you worked hard at perfecting that, which I respect, but honestly. Innovation worth bickering about here in front of your customers? Probably not.

Just make shit and calm down. The threats and whining help no one.

Decide if you’re running businesses or if this is an old school skate friends hobby, you can’t really have both.

Sorry @Hummie, not doubting you. Just trying to keep a good mood

I love the products from both of you. Hope I can invest one day.

I’ve stayed out of it this long. and probably should stay out of it. But you have to understand that John and Jerry come from different angles.

John wants to build cool shit that he wants to ride (not necessarily what others want, i.e. why there’s no other wheel sizes yet or sensors), and sells it to the community so they can enjoy it and test it also.

Jerry see’s eskate as a business and is always looking to make a quick buck. If he can take something from china, modifying it, and sell it for a profit, he’s happy. Jerry understands that to make it as a business though, he needs good designs. But I don’t think he see’s the value in building his own motors instead of using off the self china motors.

These guys have completely different approaches to solving the same problem.

@LEVer I don’t mean any disrespect to you. I still consider you a friend in the eskate world. Both you and John are innovators. But these ideas did all start from the same thread in ES. From that, you’ve solved a lot of the problems that came up with that design, i.e. innovating, a better direct drive design. John tried this original design, and ultimately, decided to do a hub motor after Jacobs vaporware hub motor failed to deliver.

DD’s probably wouldn’t be that well known if it wasn’t for you Jerry. You took an idea and a design, and worked the hell out of it to make a new drive system better (you worked out the flaws). I respect you for your work in this.

John, because of his personal situation, doesn’t have a family to feed, or kids to dress, or xyz. He can live in his own world, developing cool shit and having fun. You both come from different places. But here’s another idea… Take all of this passion, and turn it into great products for the community.

With sensors going in hummie hubs this weekend, and Jerry bringing more DD’s out, and @torqueboards new DD and The raptor 2 hubs, and more, 2019 will be another great year of innovation.

Do you want to see how your products fair against the competition? Then make sure they are at the Barrett Junction, January 19, 2019…

Haha, great copy and paste the first few iterations without going forward and showing the what difference and major improvements I did from it.

Here are the facts:

Now, if you wanna talk about someone who really didn’t know anything but just had a mechanical engineer help him (have you paid him yet for his services?), why don’t we talk to Marc or username in Endless Sphere “addicted2climbing” to find out who really designed your motor.

The first small hub motors came from Charles of MIT, his website, http://www.etotheipiplusone.net/?page_id=1663.

He was doing it for escooters. I have spoken to him about wanting to do if for a skateboard, this was all when I was still pediglide.

I welcome you asking Marc. I was talking to him yesterday. Please ask him and bring the info here.

The point: you think and presented that you came up with the design out of nowhere. Not true obviously looking at the posts above

I don’t bother designing motors because I have realized early on that the problem lies on designing a new truck. That’s what I did and that’s what I have done.

The only difference between today’s motors and what we had back then was that now you have different stator teeth and magnet counts. Everything else is the same. But the trucks, especially the axle are very different now.

I never said I invented hub motors. What I said is that I improved it…big difference.

What is this, is it because you have hub motors? Dude…go do your thing.