Have you just got that super awesome DIY build finished with a 12s5p 30Q, dual 6374s, on TB218 with 107mm wheels and wonder why you can’t get above 20km/hr without the board shaking violently? Then this topic is for you! 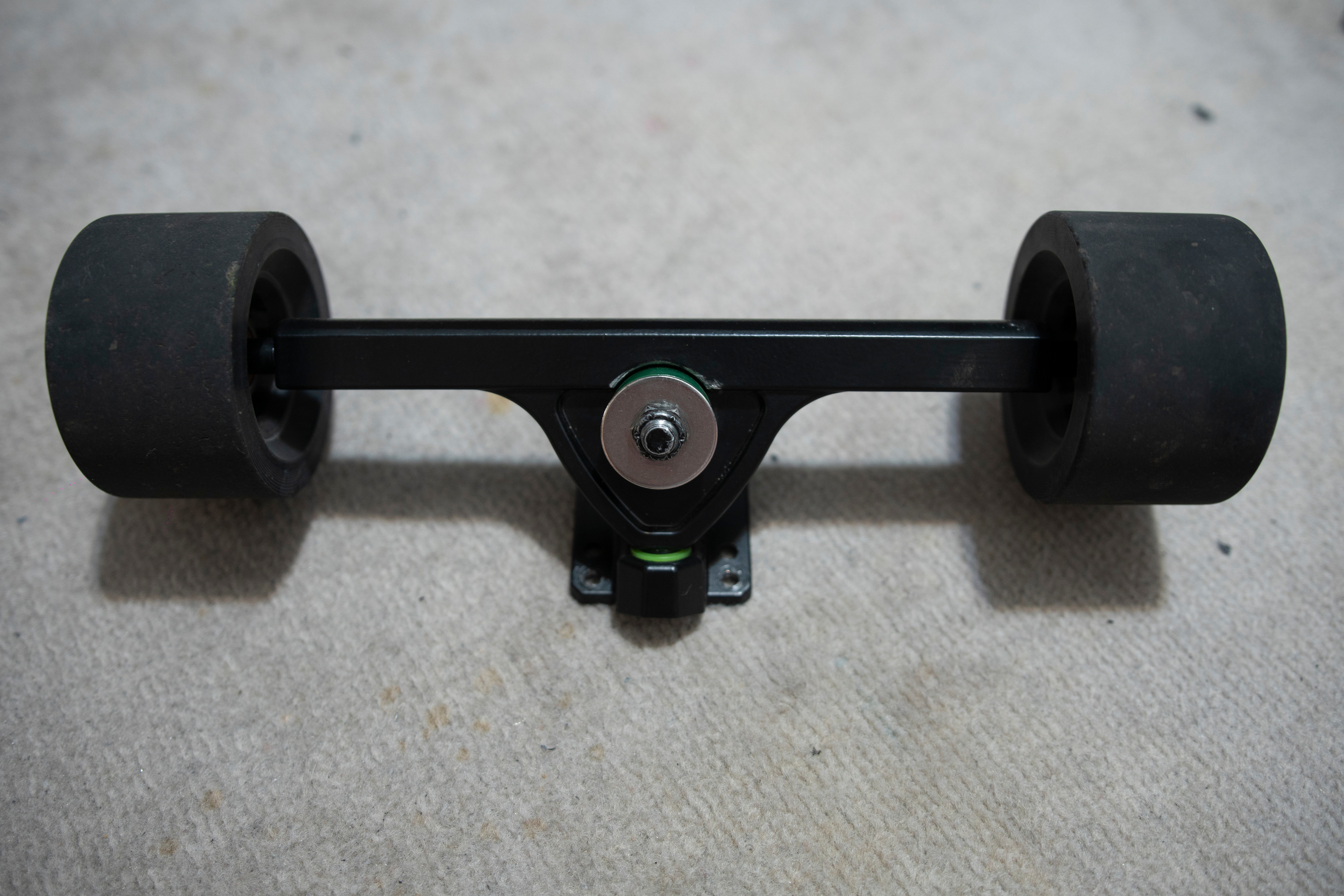 These trucks are super awesome for esk8 as they are really wide, so they can handle a large variety of different hardware. Currently I have a single Turngiy SK8 6364 with 15mm belts and there is definitely more than enough room for a second motor (which I’ll add when I have a second ESC). There are only a few other options available for builders that can accommodate heaps of different hardware, and this is also pretty cheap at only $65USD.

So many people don’t realise how many different ways you can actually have these trucks be stable at speed, especially with the possibility for some pretty powerful stuff being put on them. This topic is more meant for beginners more than anything. 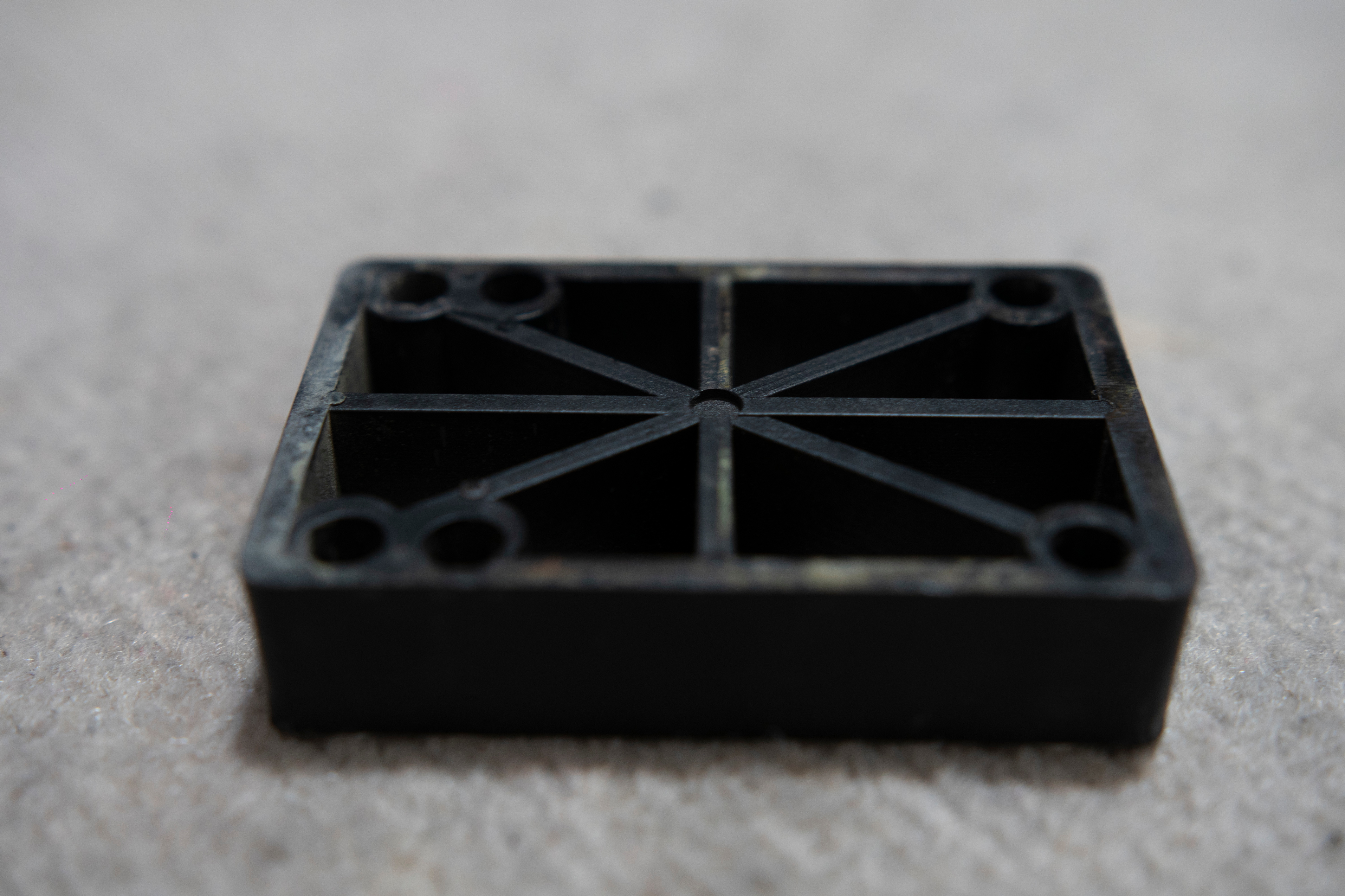 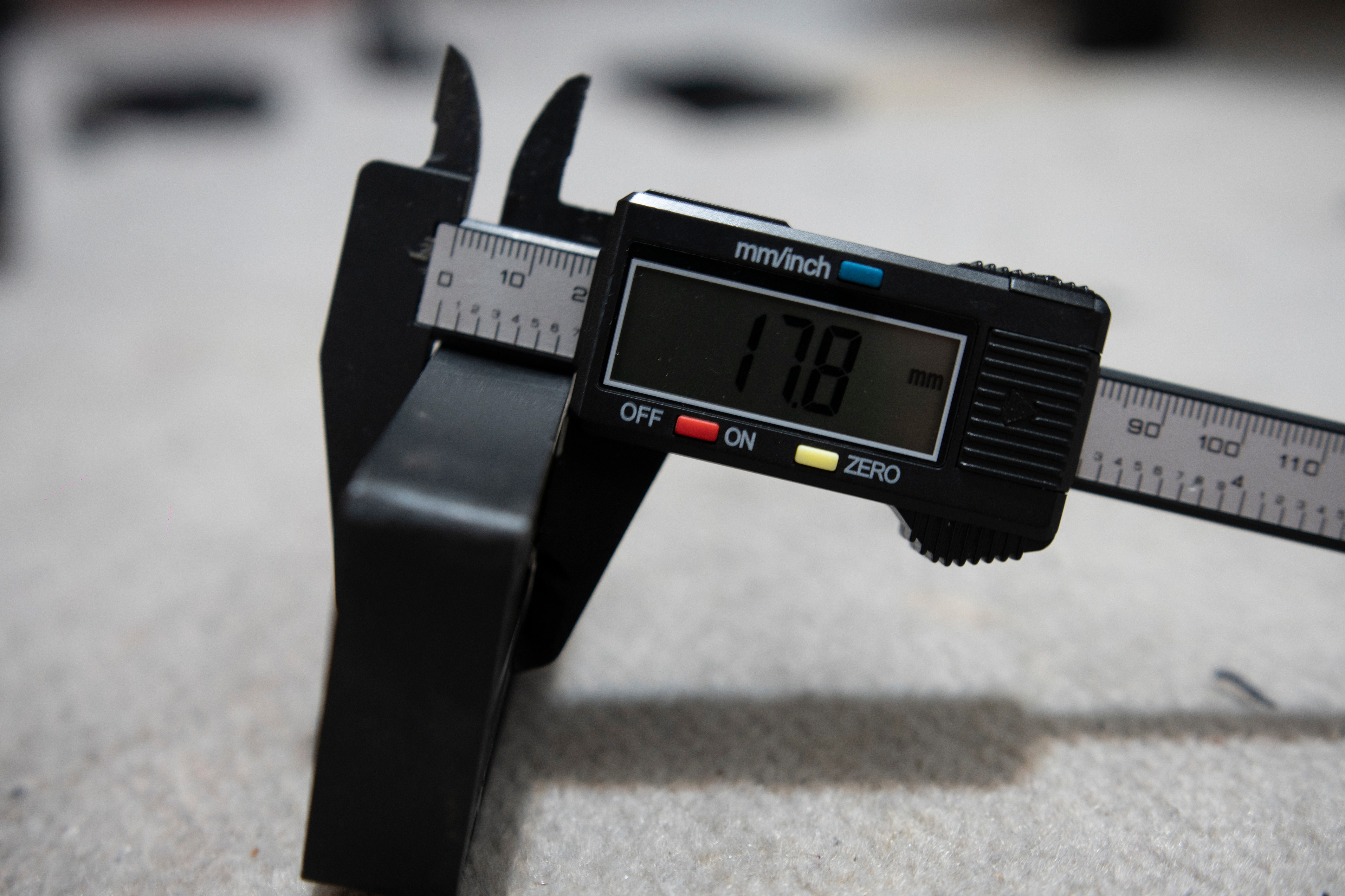 This one is definitely one that I see so many people doing. Unless you have a thicc af enclosure then there is no reason to use these. All they do is make your board more unstable due to being higher from the ground, as well as adding the possibility of truck wobble if the plastic is not perfectly flat and rigid. The riser shown is from the DIYeboard kit I used to own, with it being ~18mm thick. This one is plastic, but there are others that are either rubber or urethane. Try and avoid at all costs.

Angle The Trucks These trucks come default with a 50deg baseplate, which is okay as a starting point, but can become problematic at higher speeds. I don’t know enough about this stuff to explain the science behind it, so here’s a great topic about it:

Split truck angles, wtf are they? and why should I care? and other stuff...

The lesson I wish to teach here is that you can setup your trucks in a way that increases stability (reduce the chance of wobbles to zero!) and also increases agility, all at the same time! You can make tighter turns and curves at higher speeds and... 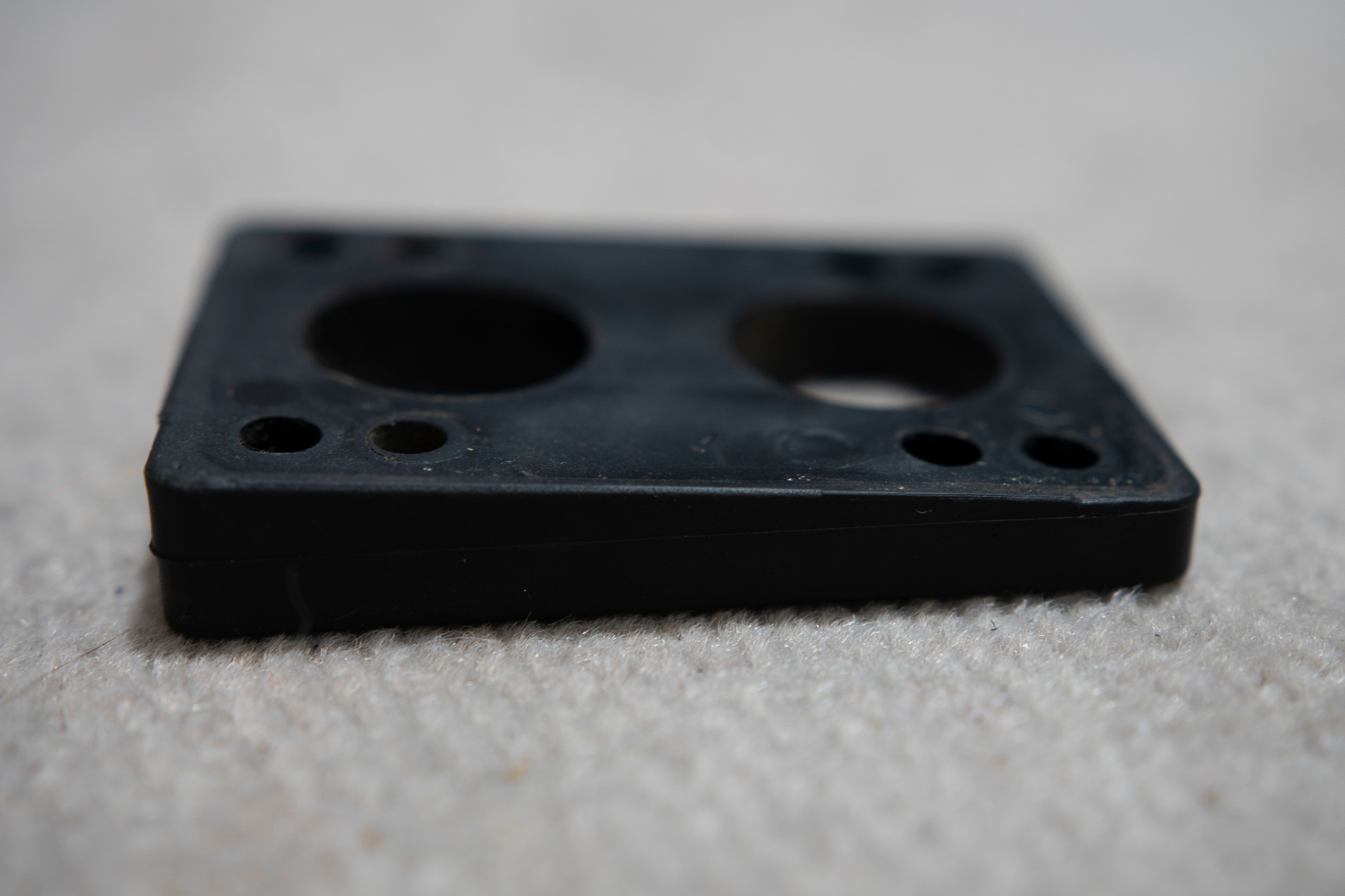 This riser shown here is a 5deg wedged riser, which, depending on which way its facing, can either increase or decrease the truck angle. My understanding is that the front and back trucks should be different angles to aid in stability, so I had originally place this riser on the back truck to give it a 45deg angle, with the lower the angle on the back the better. The issue with this riser is that it is make out of rubber or urethane or something, so its actually flexible. 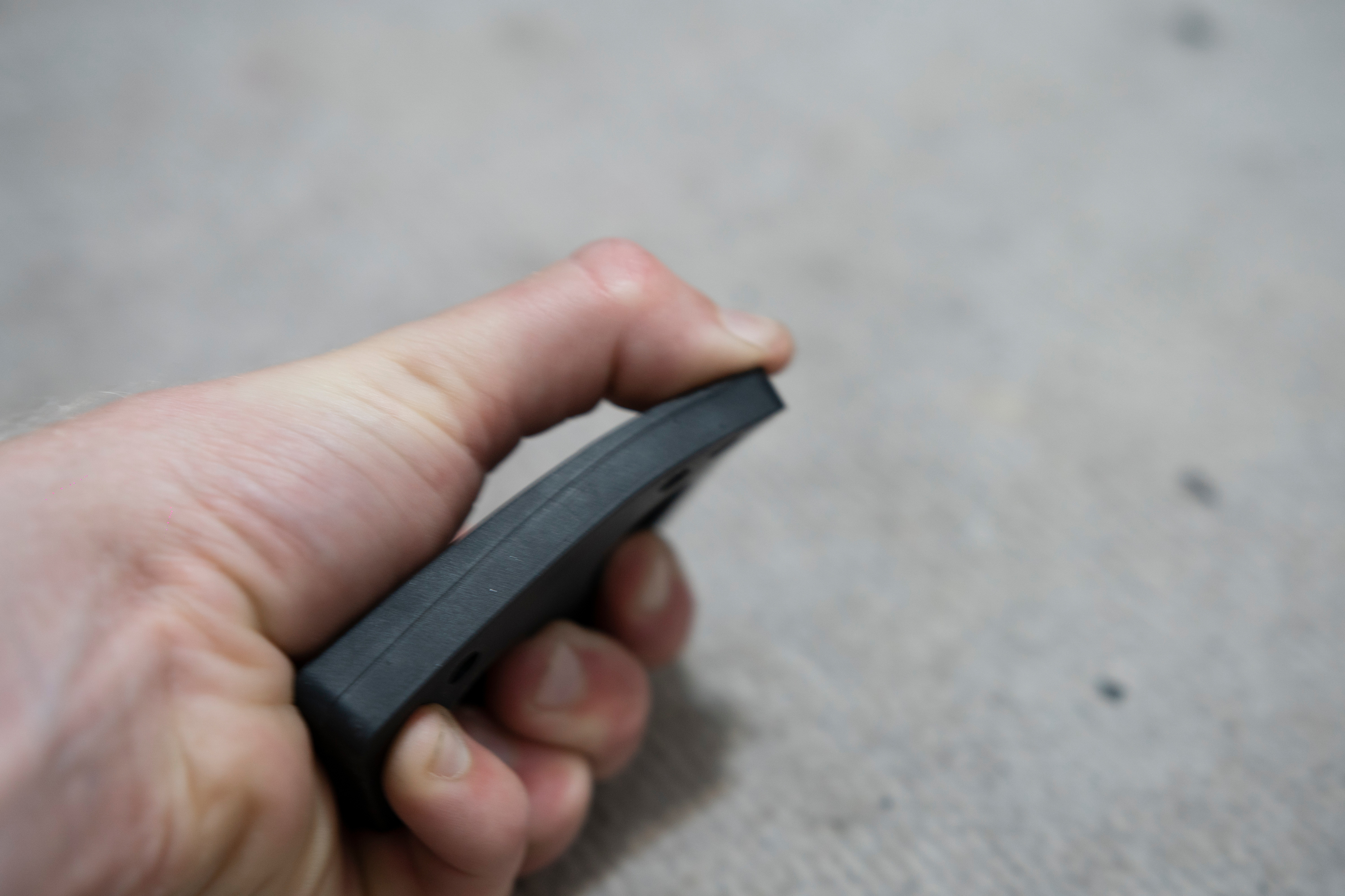 This is bad!! If you must use an angled riser, make sure its stiff. 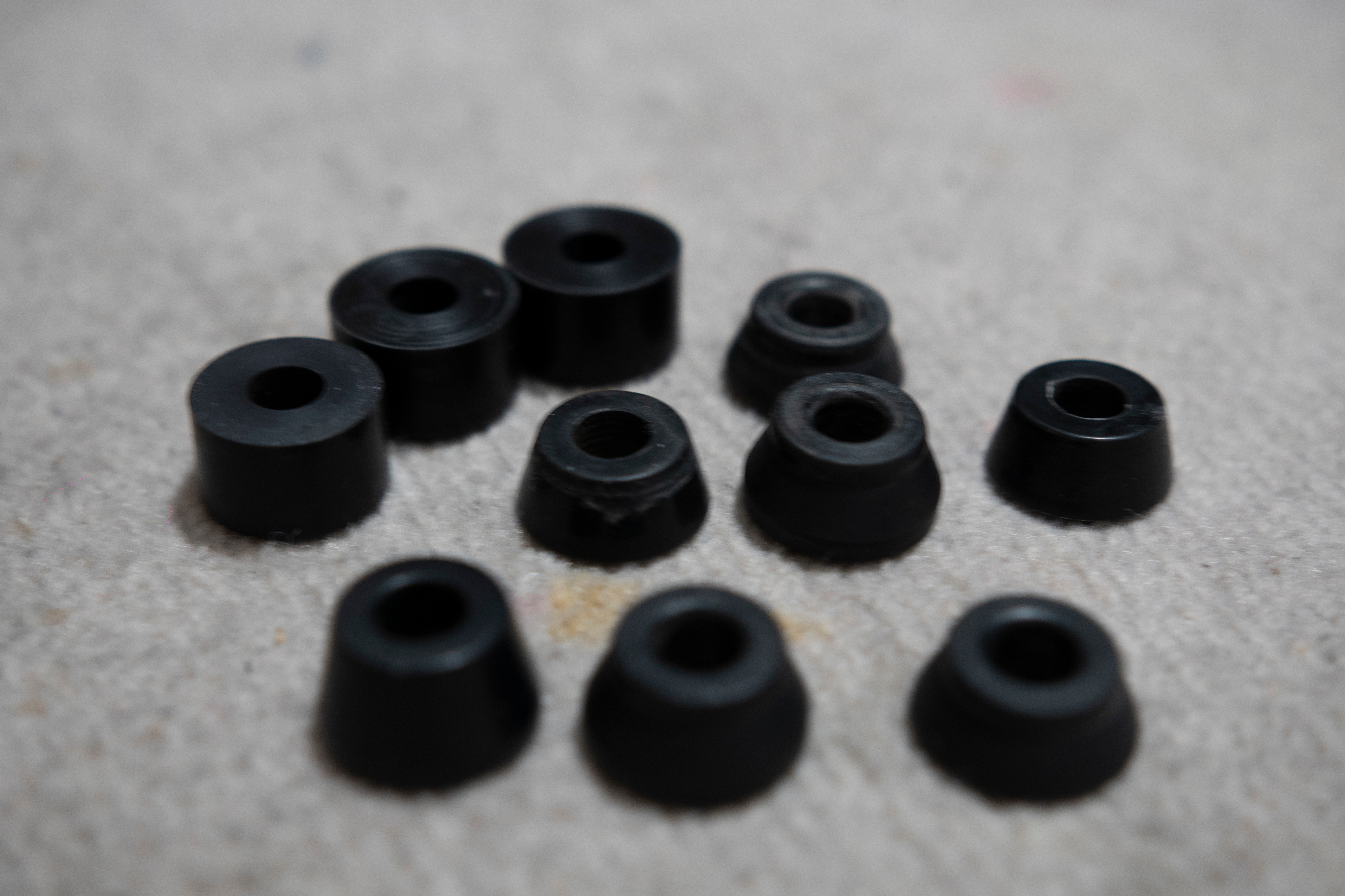 Long story short, stock bushings suck ass. Regular skateboard bushings suck ass. Here I’ve got a collection of bushings, from the DIYeboard trucks, the stock TB218 trucks, as well as some skateboard bushings. They all suck, replace immediately. This is another topic I’m not super knowledgeable about, so here is a topic from @Alphamail who is a representative of Riptide. He’s the man to talk to about this.

Since I manufacture RipTide Bushings I have extensive knowledge of bushings and how to set up your trucks to do what you want to set up to do, including wedging and de-wedging. Unfortunately, many trucks for the electric market are clones of other...

I took advice that was given to me from Brad about bushings, as they have a large variety to choose from, and I gotta say that it was one of the better choices that I have made. Super helpful for adding stability at speed, and you can really tune your setup with different shapes and hardnesses depending on how you ride and stuff. Super great stuff.

This goes along with the bushings, but changing the pivot cup from the stock one to one from Riptide has helped with removing any slop from the hangar. TB218 is almost identical to Caliber II in terms of measurements, so you can use the Caliber II pivot cups in TB218. Here are some caliper measurements of the stock pivot cup vs the Riptide one. 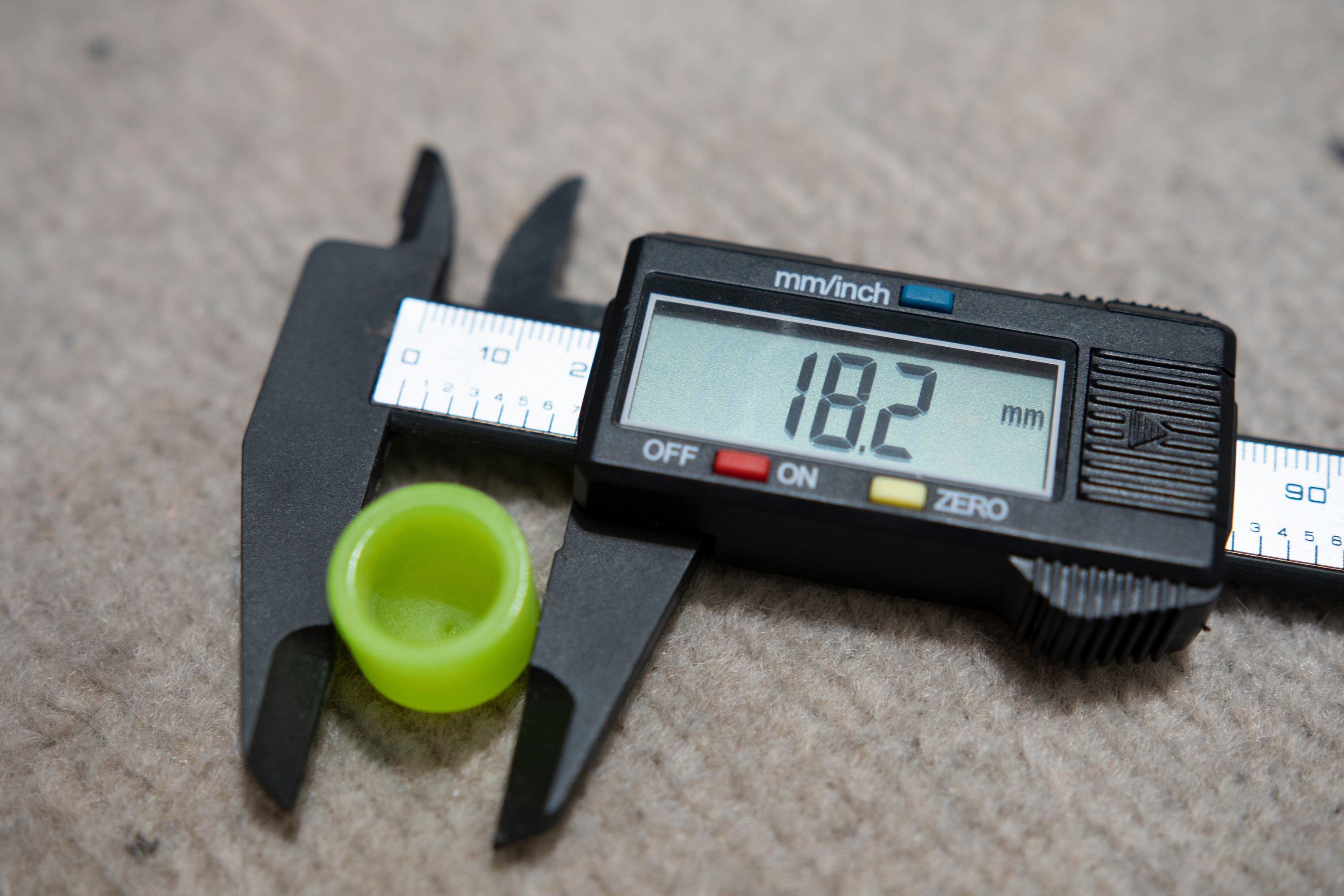 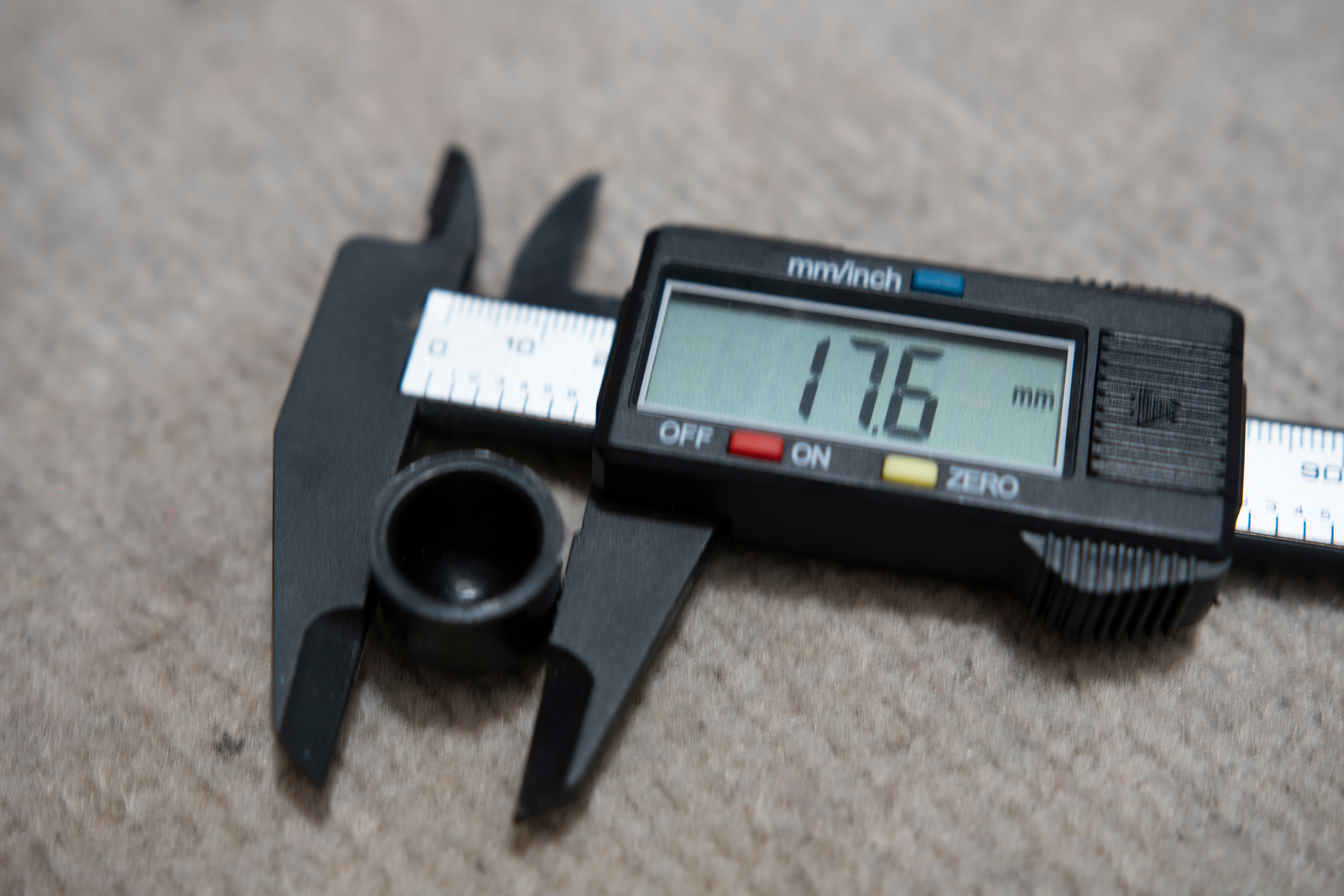 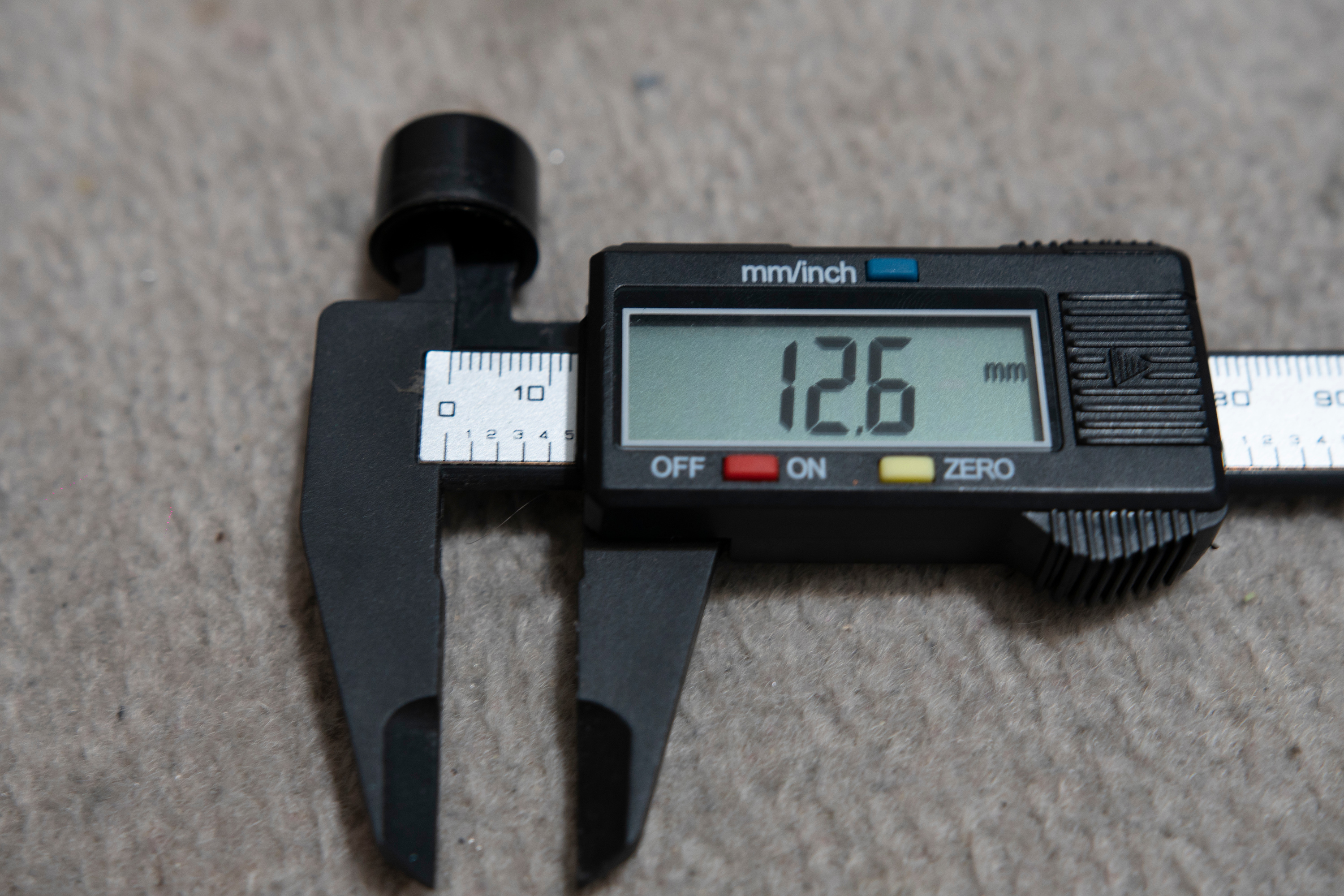 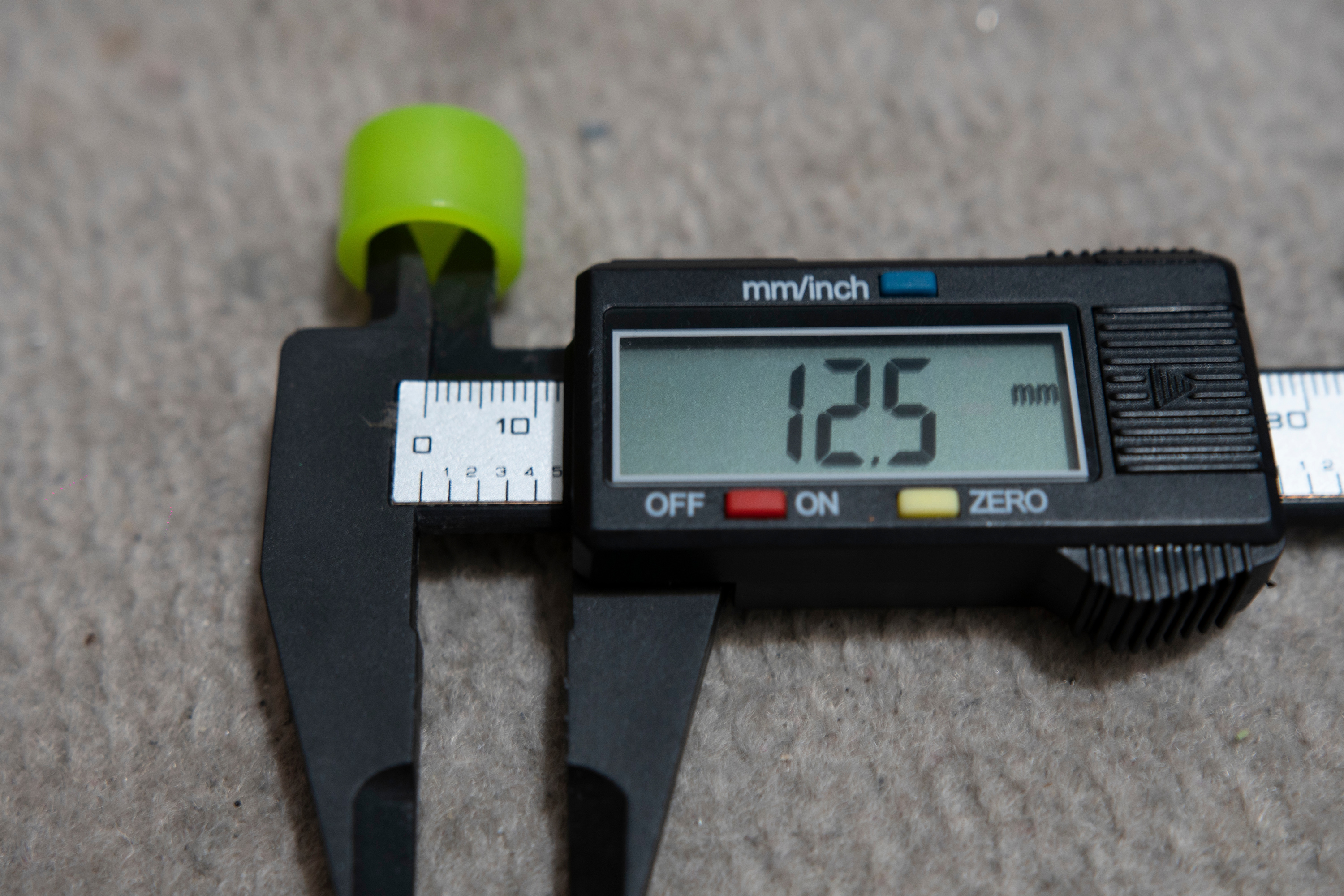 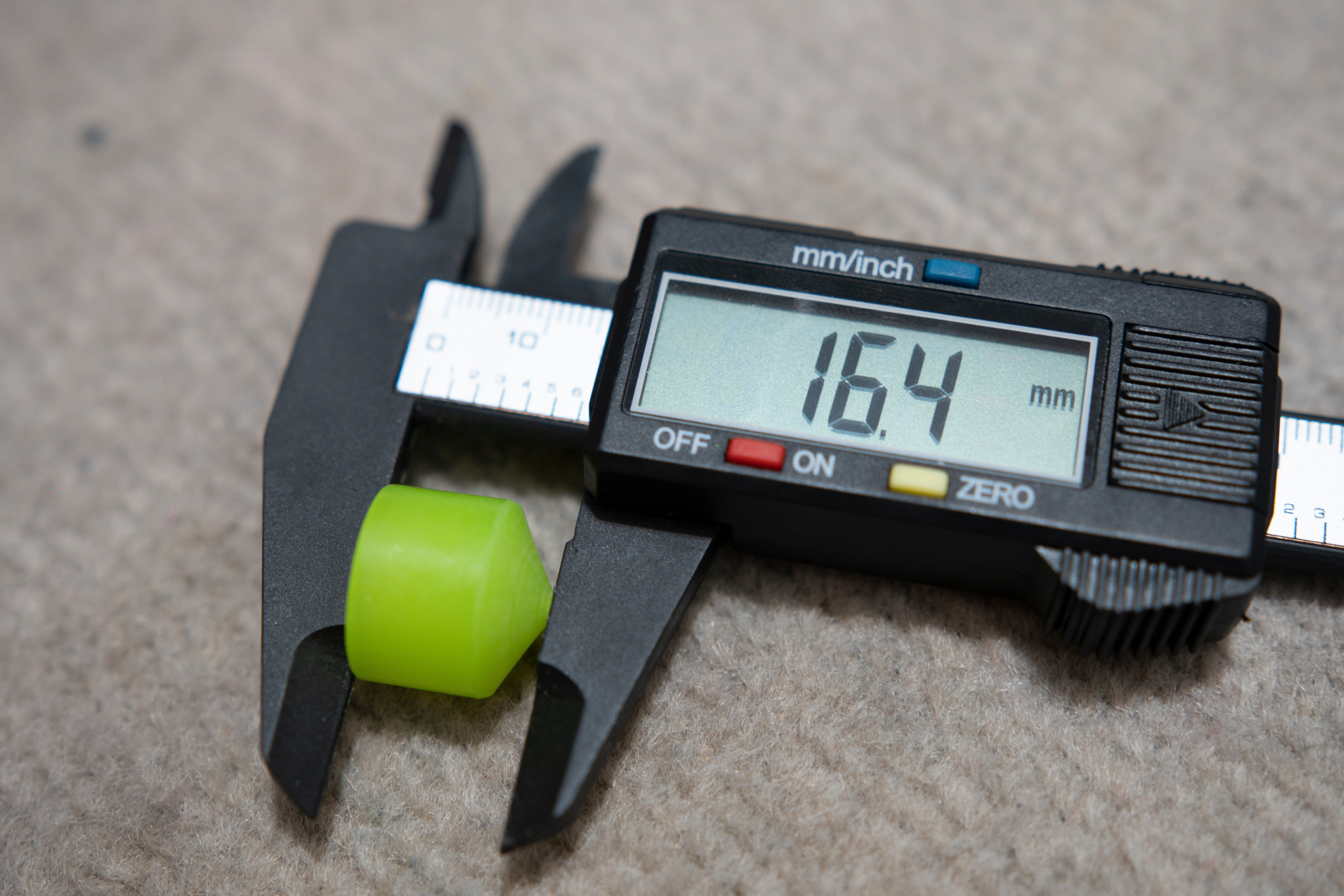 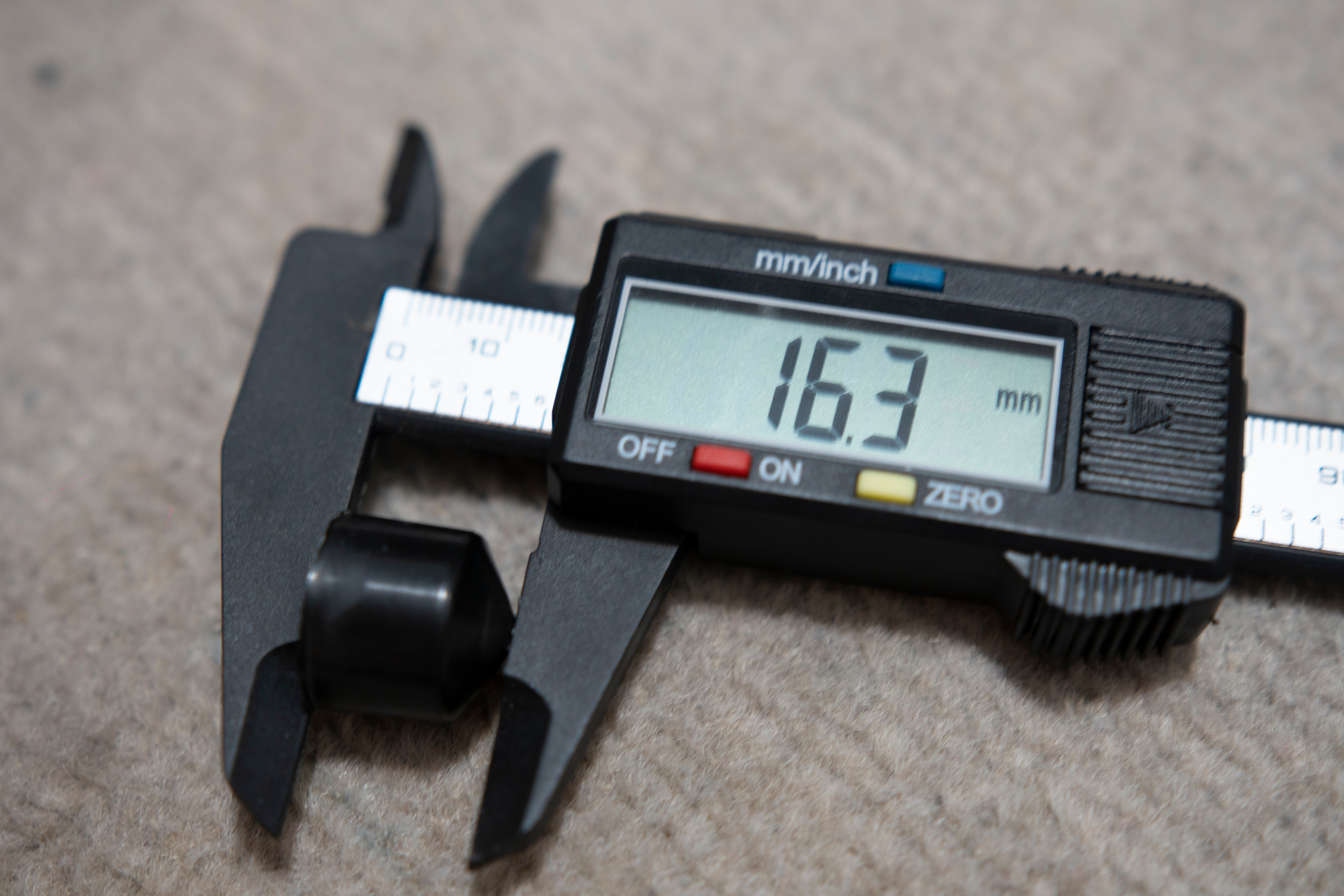 These measurements might be very slightly off as its only a cheap eBay caliper. While they are different sizes, it is possible to fit the Riptide one, it just takes a bit of work to really get it in.

Use A Different Baseplate 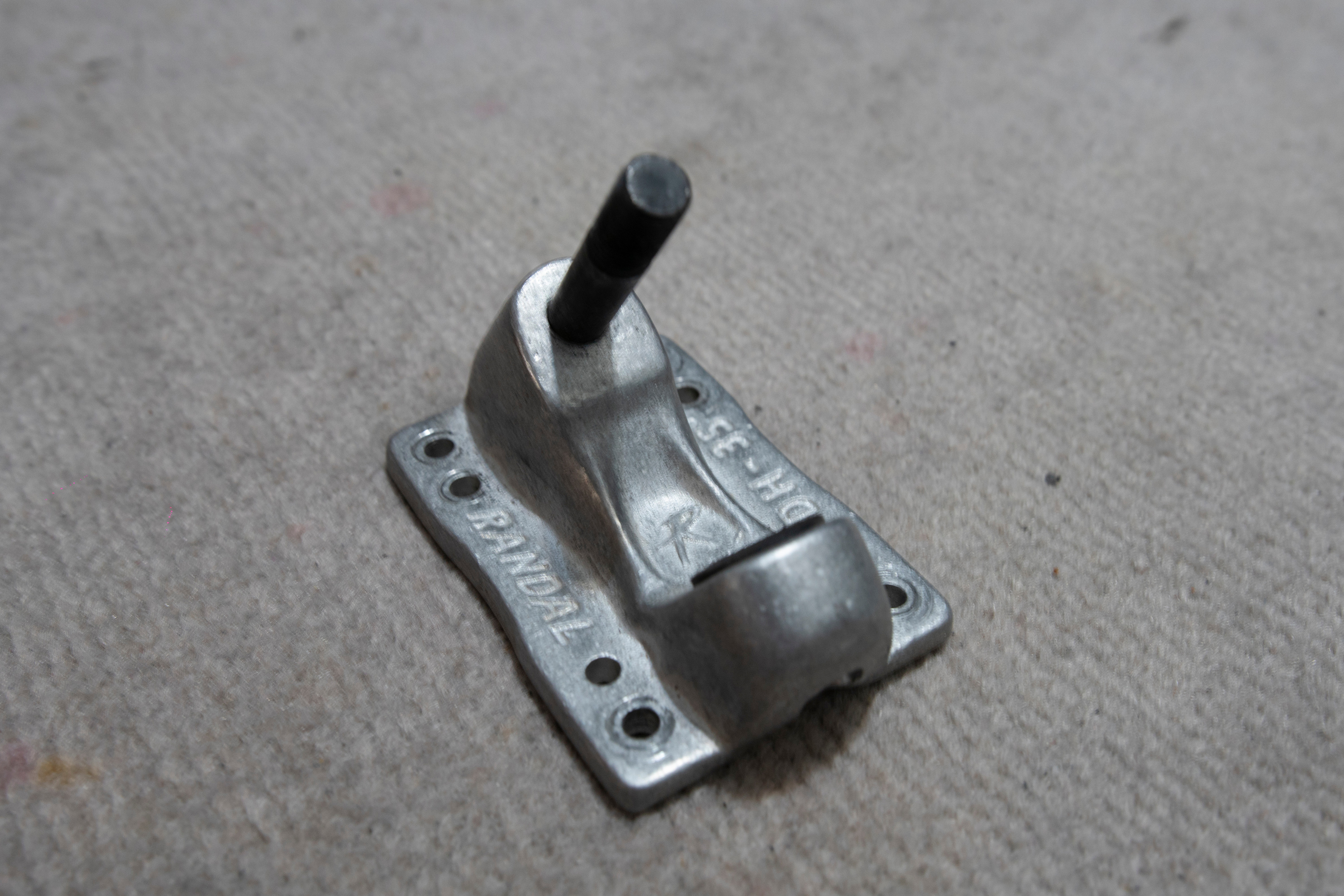 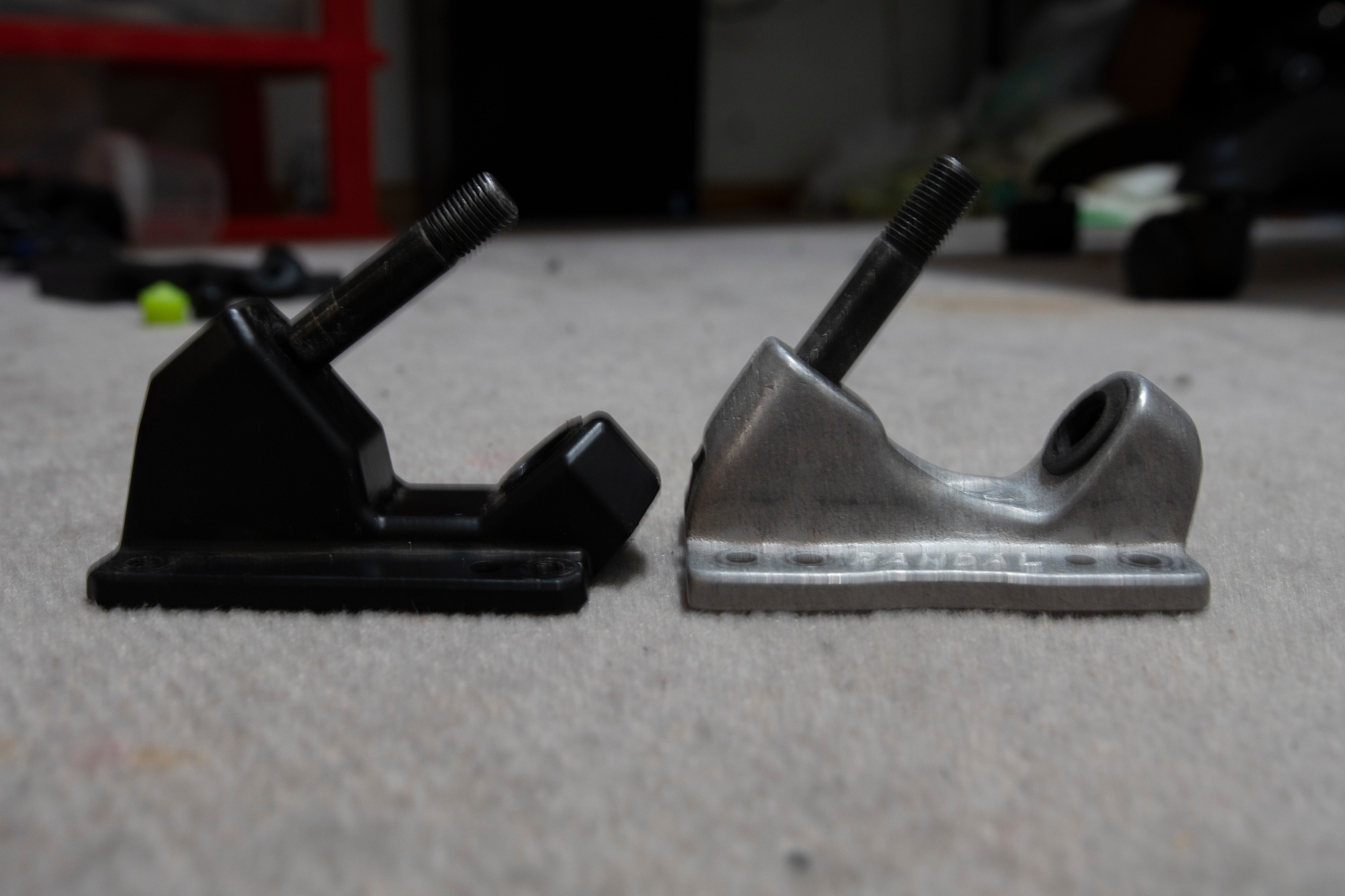 Earlier I touched on using different angles to achieve more stability, and a better way to do it without adding unstable angled risers, is to use a different baseplate. This here is the Randal 35deg baseplate, which is also available in a 44deg model as well. This is world renowned for being the best option for users of Caliber II trucks to bring their angle down. The TB218 hangar fits into this without much issue, and the kingpin sits in the hangar hole perfectly. One thing to note is that I bought this without a kingpin bolt, so I used one that I had laying around from my DIYeboard trucks. The TB218 kingpin bolt is longer than this so would be more suitable, but its an absolute bitch to get out, and almost definitely doesn’t fit in the Randal baseplate. One difference to note is that the pivot cut seating is of a different size on the Randal baseplate compared to the TB218 one, so you will need different pivot cups. I believe its the Indy ones, but that is a question that @Alphamail will need to answer. Here is measurements of the pivot seating, as well as the stock Randal pivot cup. 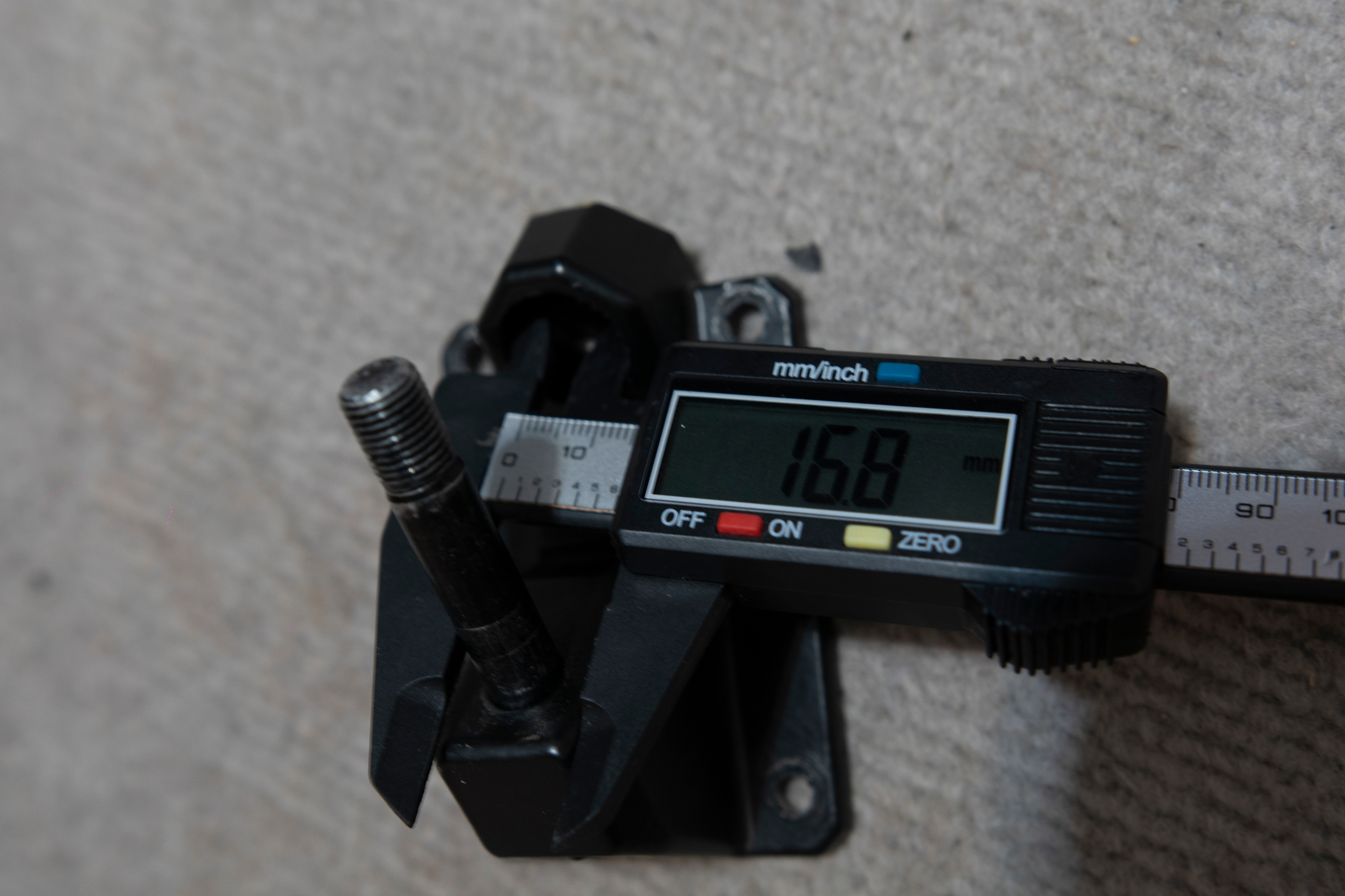 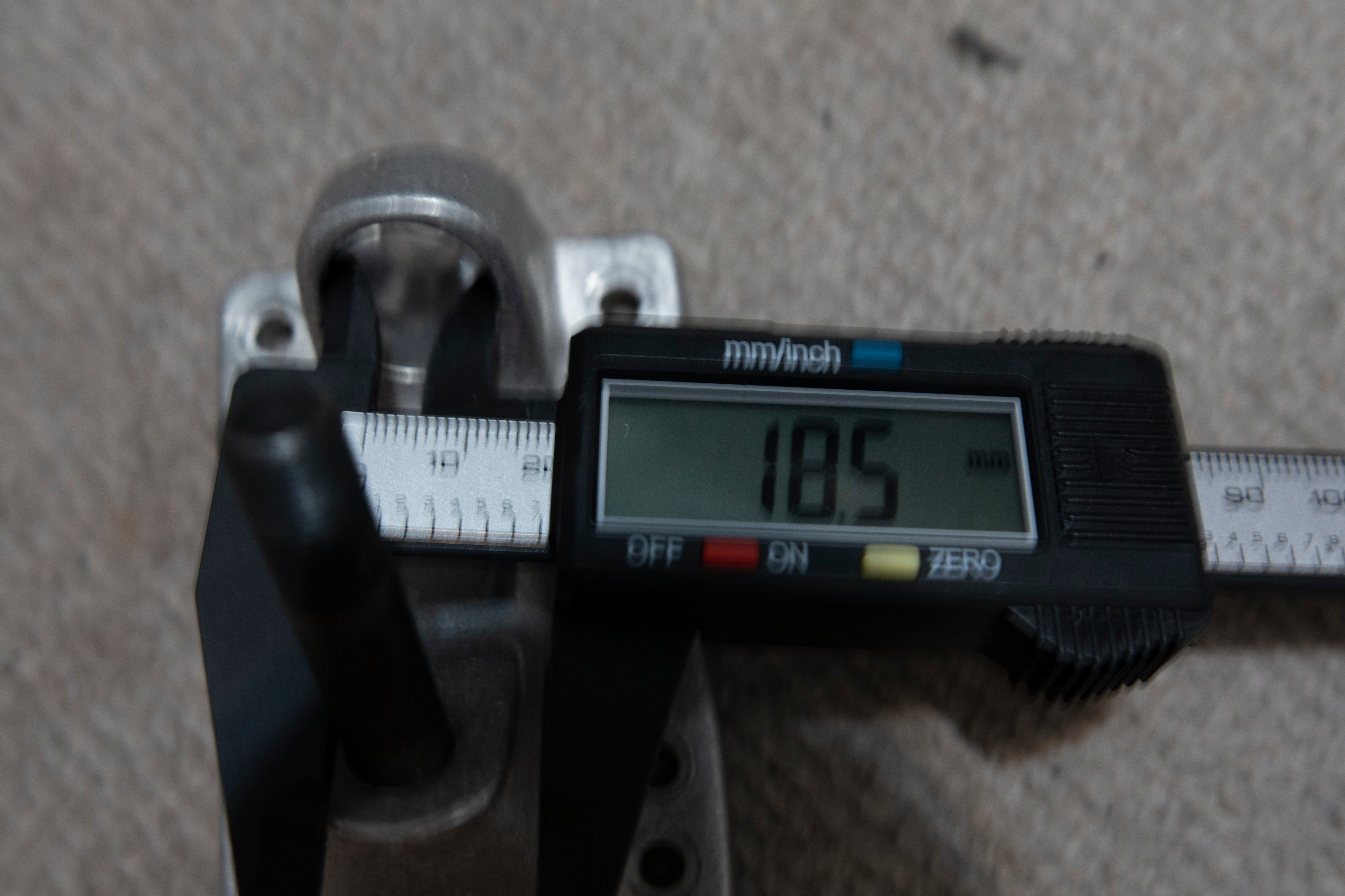 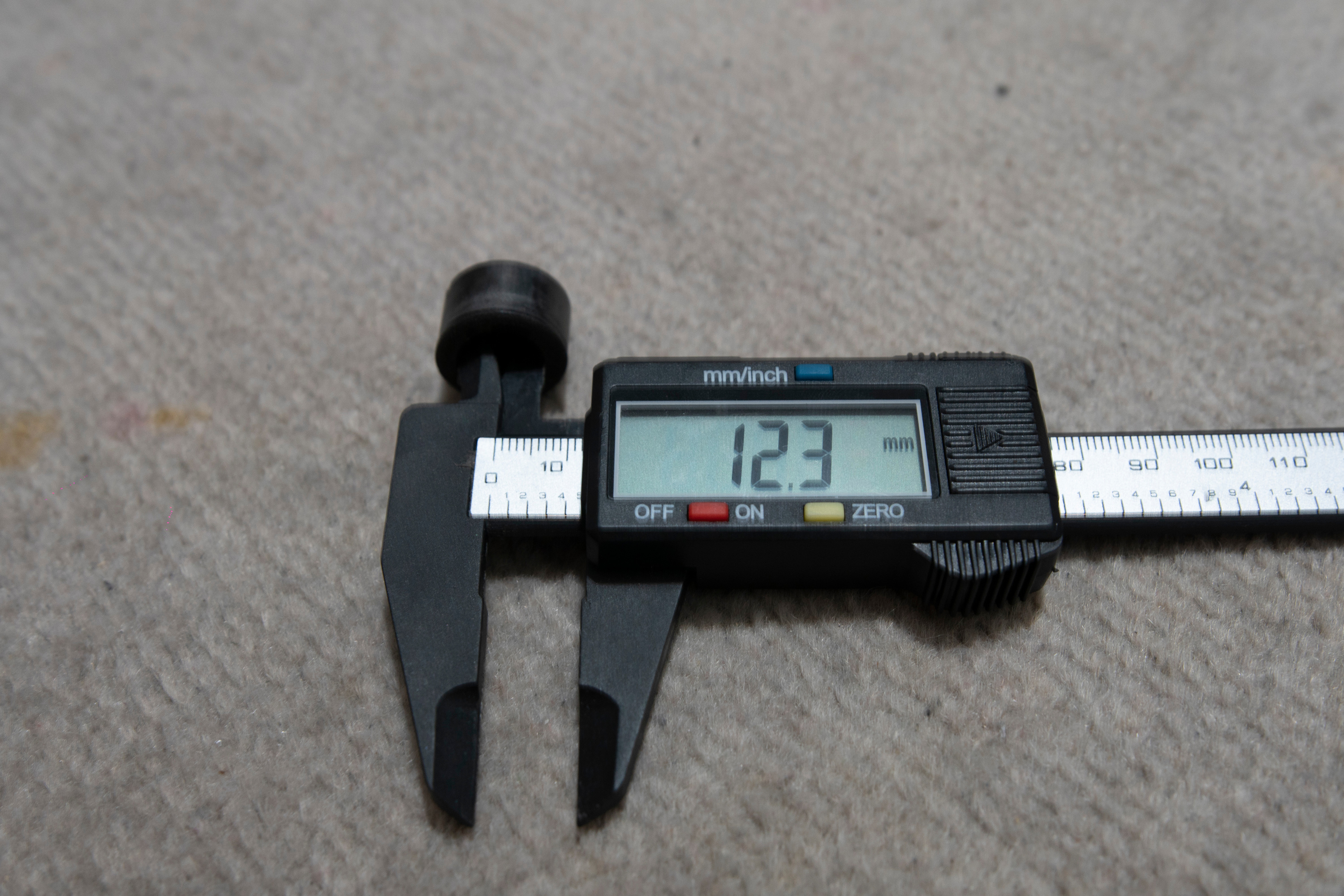 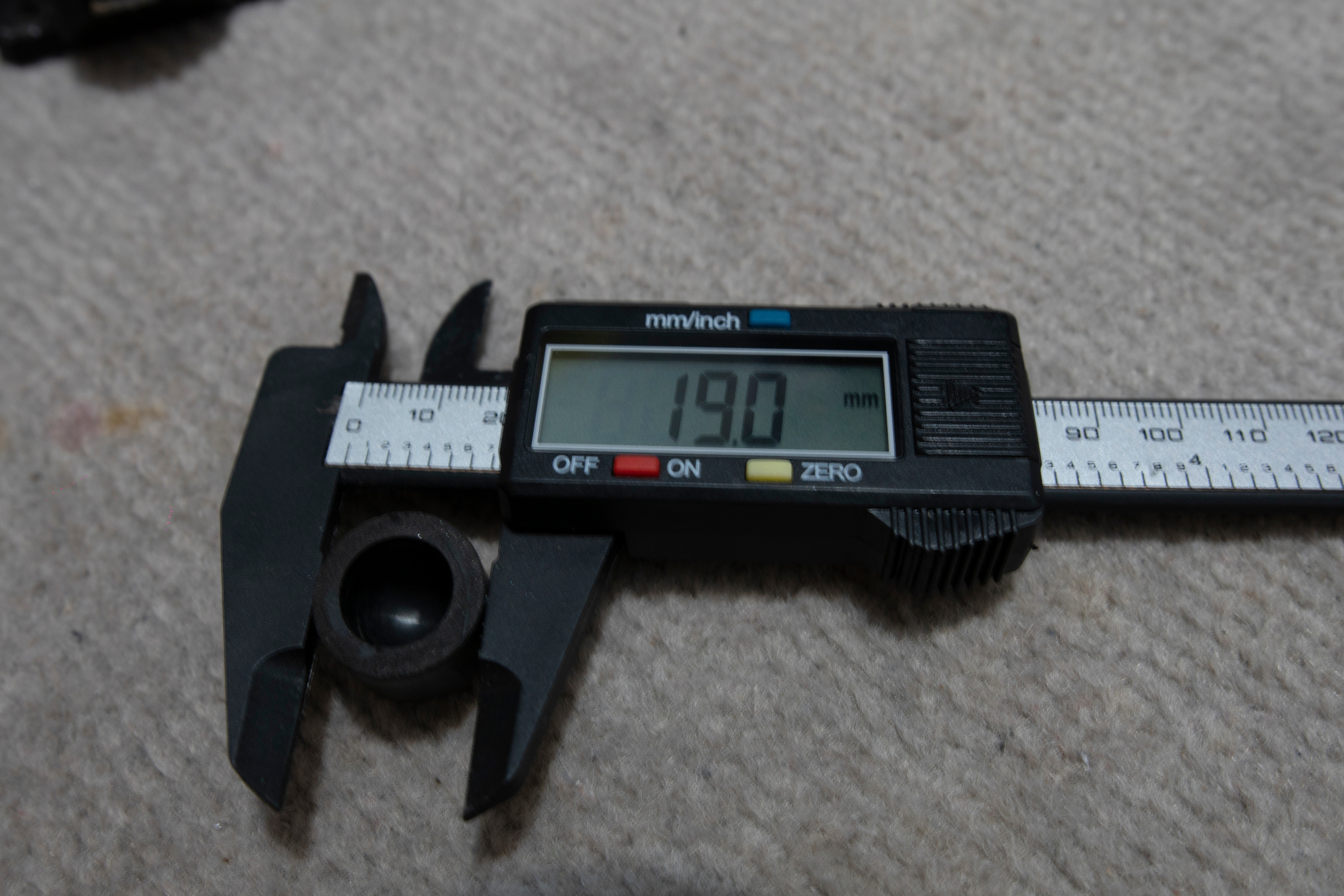 You can compare these pivot cup measurements to the ones above.

Mount In Drop Through 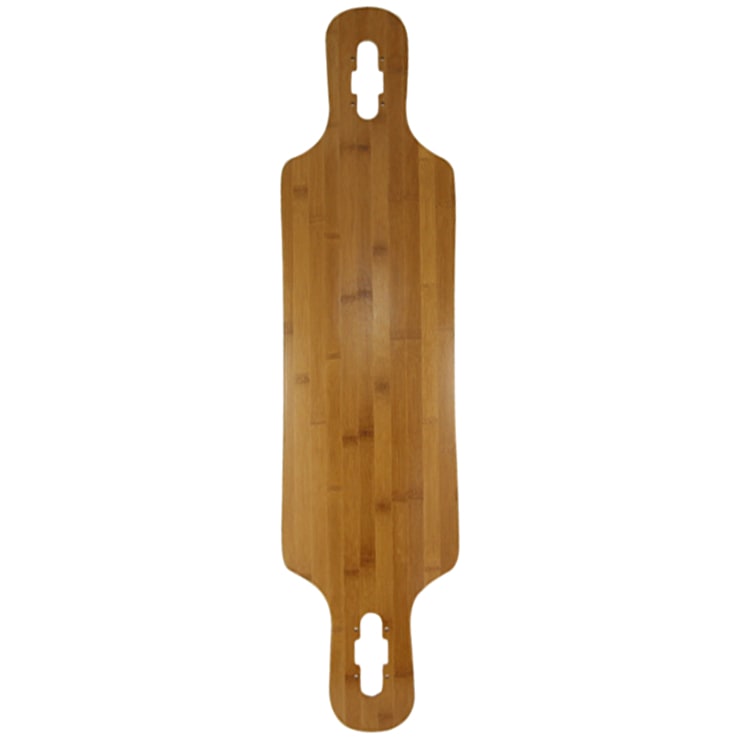 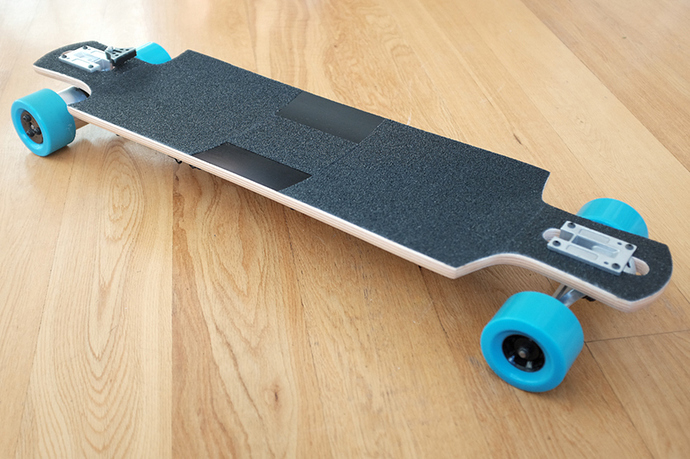 While I don’t own one of these so I can’t say exactly how much it changes things, being able to mount your trucks through the deck lets you get a few more millimetres closer to the ground, thus giving it more stability. Your wheel size as well as enclosure size will determine whether you can do this. You can also top mount on a drop-through deck just in case you don’t have the room or something.

Add A Stability Key As mentioned by @lrdesigns you can 3D print a small piece that goes around the hole in the hangar which helps to remove slop by keeping the kingpin more stable. I will be printing one of these eventually, but I’ve heard nothing but good things. You can find the files to print here : https://www.thingiverse.com/thing:2855766

Apologies for the crazy depth of field in some of the images, my light isn’t the brightest and this room doesn’t have a window so I need to keep that aperture low af

Pretty sure I’ve covered everything, if anyone has any questions or anything they wanna add then feel free to leave a comment below!

One other tip is to use a “key” it takes slop out of the king pin and makes the steering much more precise and predictable. It’s basically a small ring that fits between the king pin and hanger. I would not use the trucks without them anymore. And very easy quick to make with a 3D printer.

I knew I was forgetting something! I literally have the link for it bookmarked https://www.thingiverse.com/thing:2855766

I regularly take my TB trucks over 70kph with no speed wobbles at all. I use the Miurskate almost precision set it made a huge difference.

I’d love to get opinions of various bushing brands, as I can only speak for Riptide and I don’t think other brands have really committed to esk8 the same way Riptide have

One thing you can add is technique. If I am going for high speeds my feet and hips are straight. My weight is over my front foot, bent over at waist and knees, core strong, and awareness in relation to your board/motors/remote, cars/bikes, and bad spots in the road.

This is a very good point. Someone who is perhaps a historical skater would be better equipped to tackle technique, as esk8ing is my first foray into skating

Hey guys. Browsing trough build posts, and general discussion I found out that most of you are extremely knowledgable on the electronics part. I don’t even fully understand some of it since I am more a rider than a builder. But reading trough most...

Scroll down To 3.1 for Stance

Thanks for that man, wasn’t sure if the topic existed

I’m using Riptide bushings on my TB trucks but I’m using venom bushings on my Evolve build, tonight was my first ride with the evolve trucks and man they can go from smooth to scary wobbles in 0.1 seconds… I actually fell tonight’s ride but wasn’t due to the trucks was due the board cutting out at full throttle. I had a helmet on but I slammed pretty hard so I’m staying awake to make sure I don’t have a concussion.

Sorry I went off topic

I’m using 97a street side bushing the front and back and 93a in the front board side and 95a in the back board side, with 96a pivot cups and precision top hat washers all on my Evo build it’s super stable yet Is still turns really well.

One thing I need to do is change what duros I have in the back compared to front as they are currently symmetrical. That’s one thing I should have noted was always have a harder duro in the back

Also I hope you’re okay, falling off at speed is crazy scary.

Yeah I’m a bit sore but I was fully geared up so I have no road rash at all just a sore where my shoulder hit the ground and I have a head ache from slamming the side of my helmet on the ground.

I easily hit 35mph (cruising speed) and all I have done is drop mount the front trucks, riser mount the rear with a 1/2 piece of polycarbonate) changed the bushings to 93a and 95.5a riptide bushings and that’s it… but I’m also a 215lb guy (hence the heavy duros, also I’m using the wfb formula bushings) 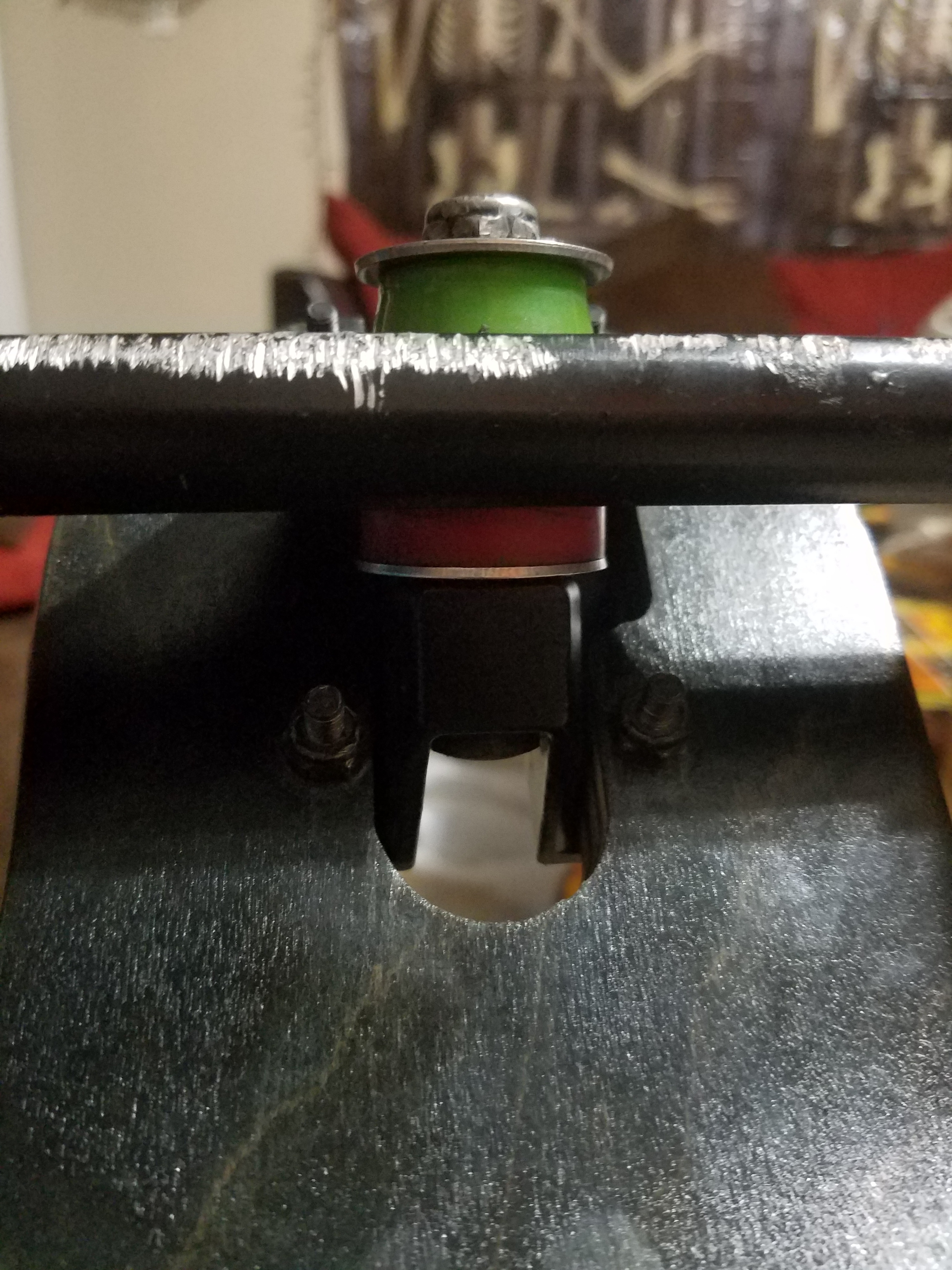 I’m using their KranK formula stuff, and will be getting a drop mount deck eventually for maximum stability, I wonder if the WFB stuff is gonna be much better than krank Also only at 160lbs so only using 90a

How come you have the harder bushing roadside?

Honestly, it feels the most stable this way. I tried the cone on the bottom, on the top, flipped it upside down and then went top and bottom again and this one doesn’t see any wobbles even when I hit cracks, so that’s where I left them

It could be due to the barrel being a chubby, but yea it’s super stable

I totally agree with this. Its just I see too many beginners with 1inch rubber risers, stock bushings etc and wonder why they cant get anywhere near the theoretical max of their board, so thought a well written topic could help

On a separate note, what are those blue wheels in the drop through deck picture?? I love that color

They are from this build log https://www.electric-skateboard.builders/t/dropthrough-deck-for-my-build/20285 Wheels arent mentioned but you could ask