Hello guys: I’m working on a new board right now, I’ve already built some boards each with unique characteristics:

So the logical step is to have a board than can go averywhere no matter how bad the road is, could be ridden at high speed with good stability and could hold my favorite cell the 30T for 140A os discharge, so it’s gonna be a torque monster. 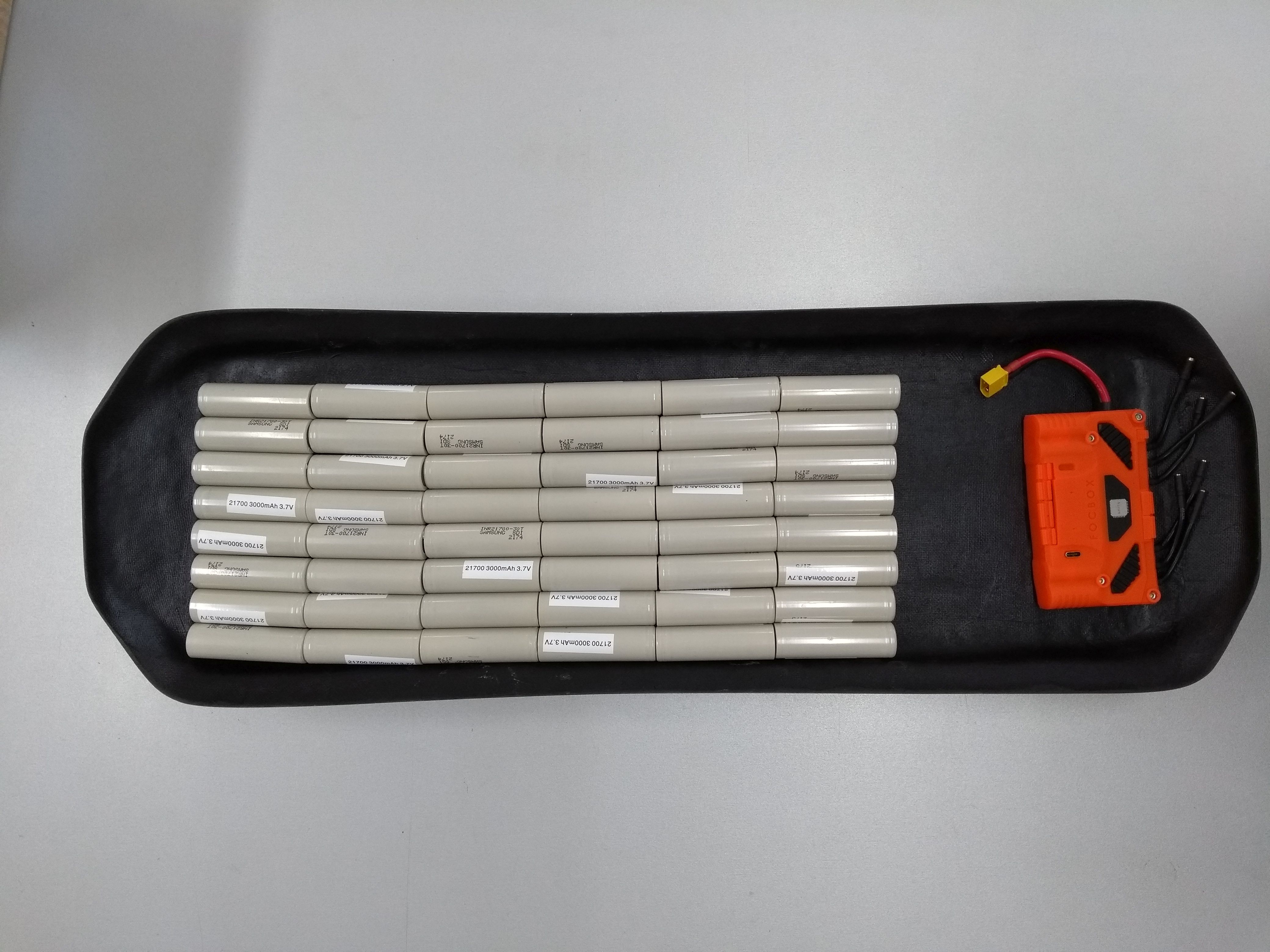 Here is the enclosure installed on the deck, with the wheels and surfrodz trucks: 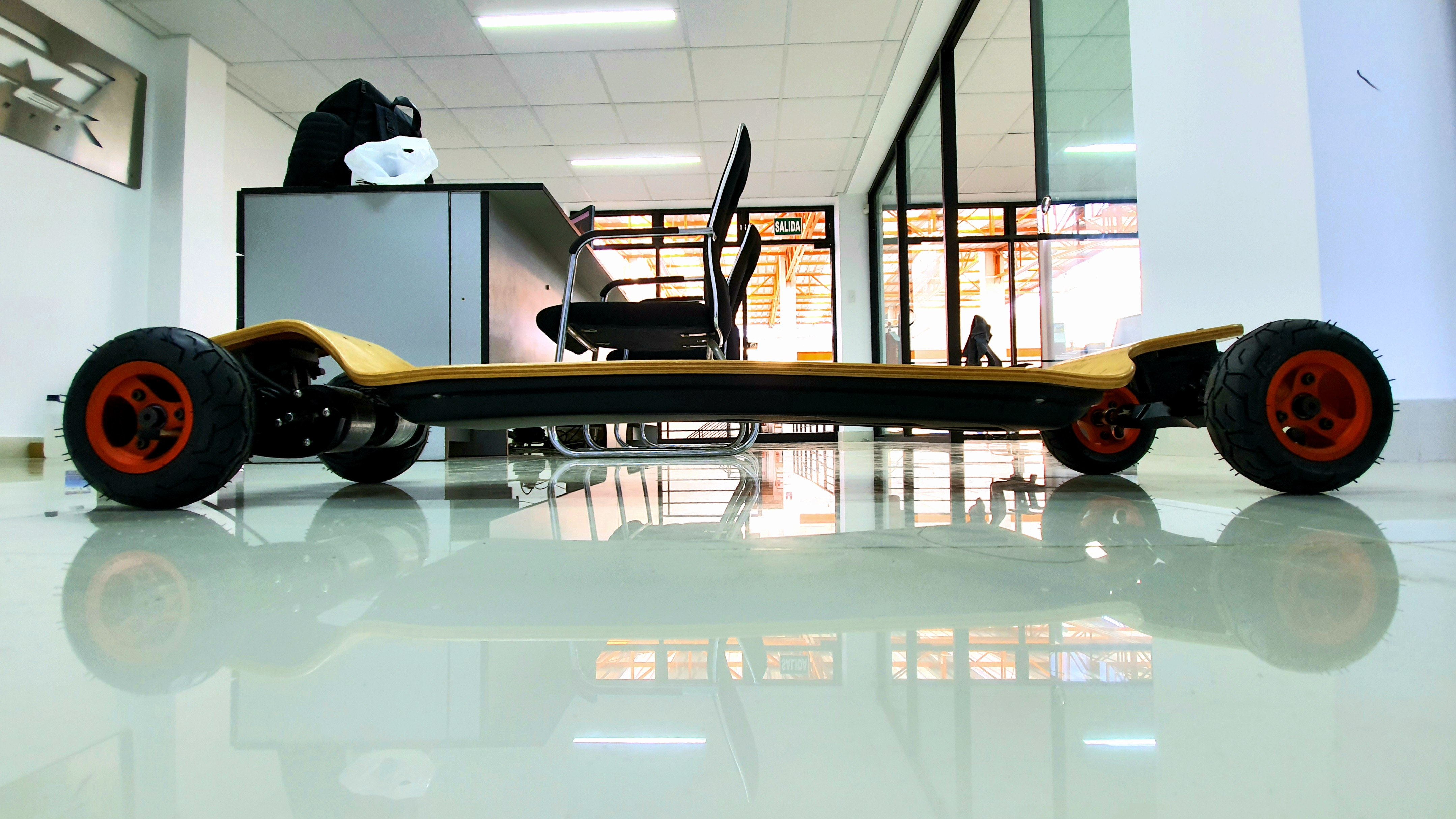 Rear view, it looks like a drag race car: 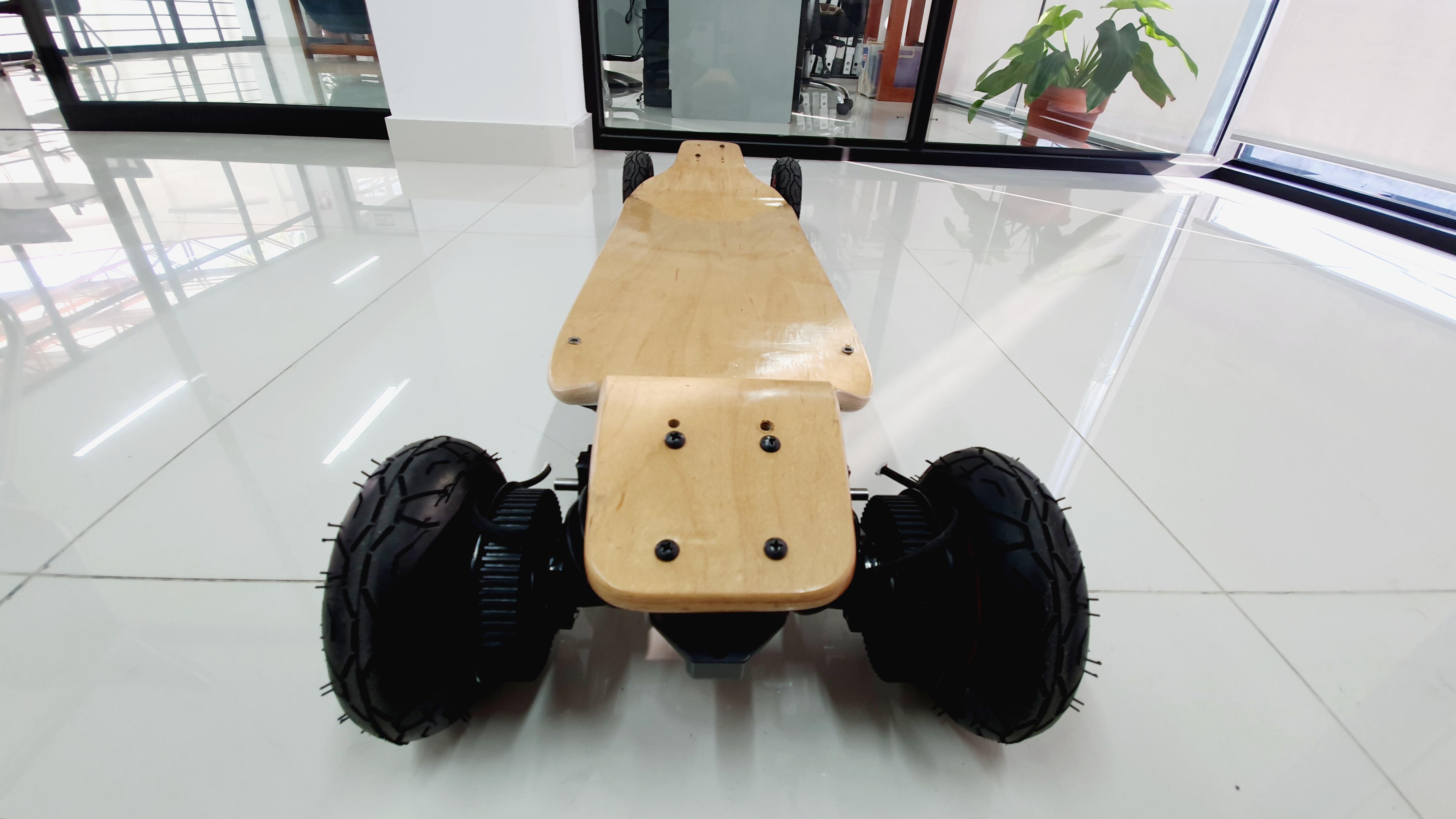 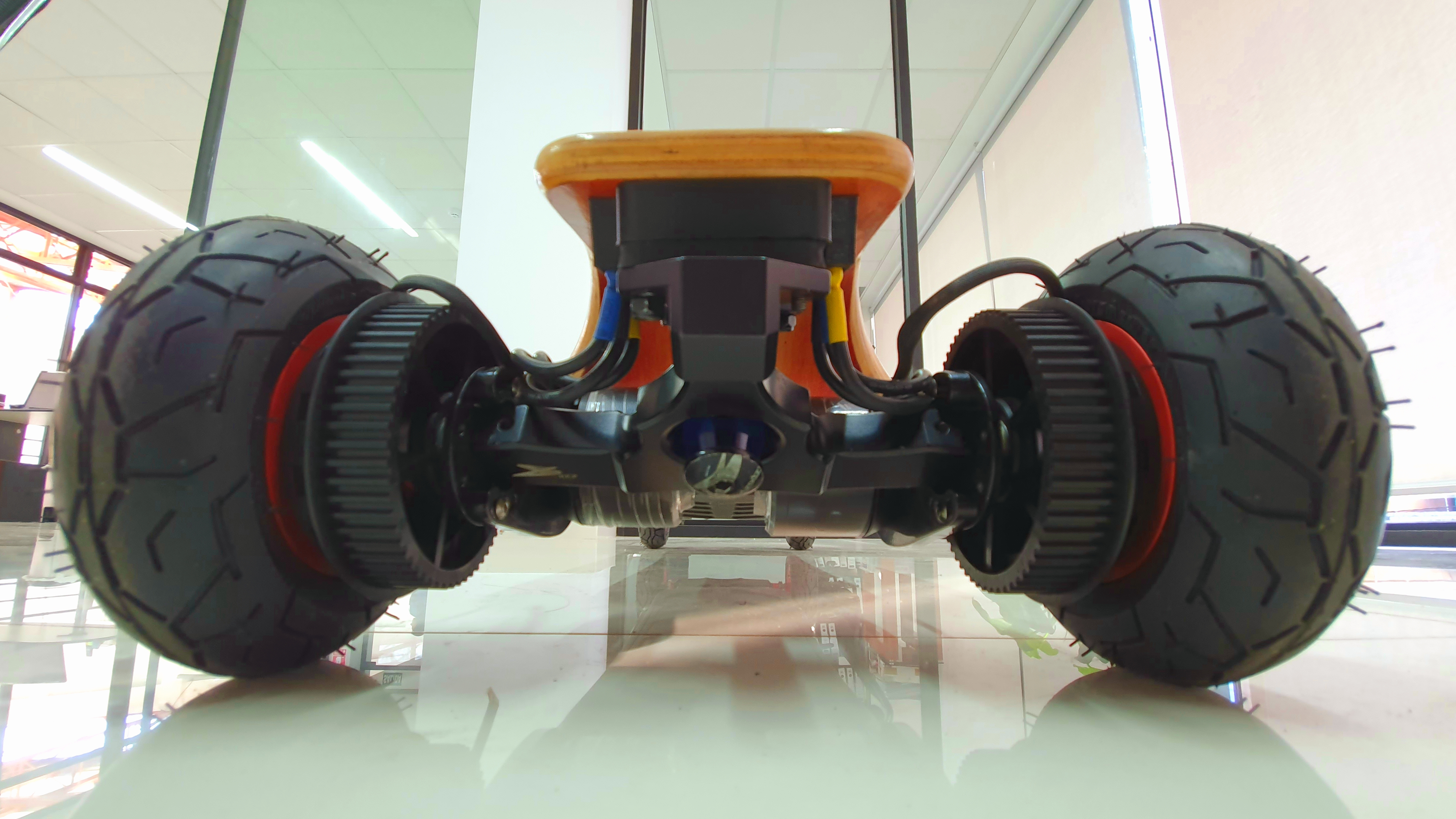 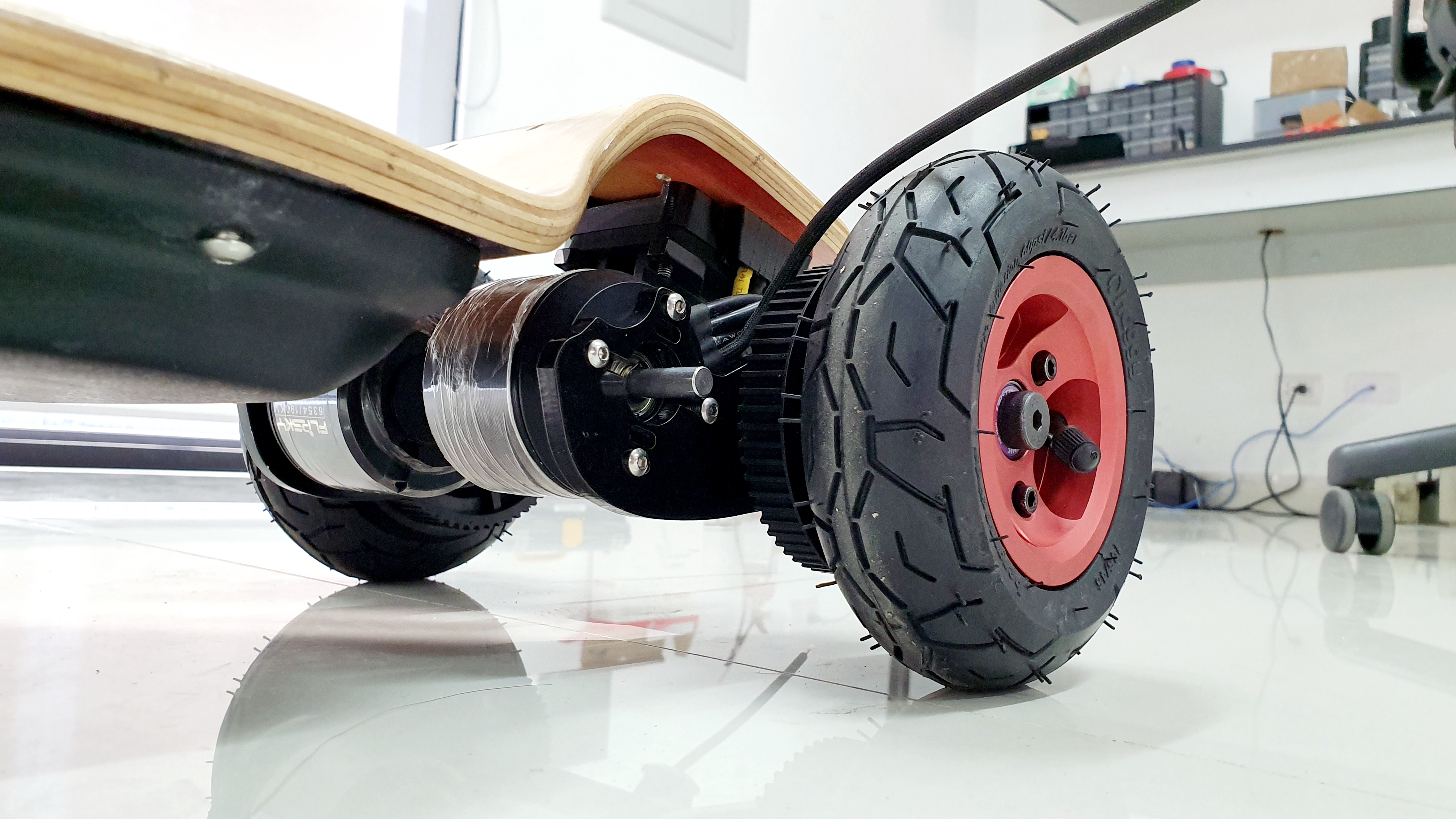 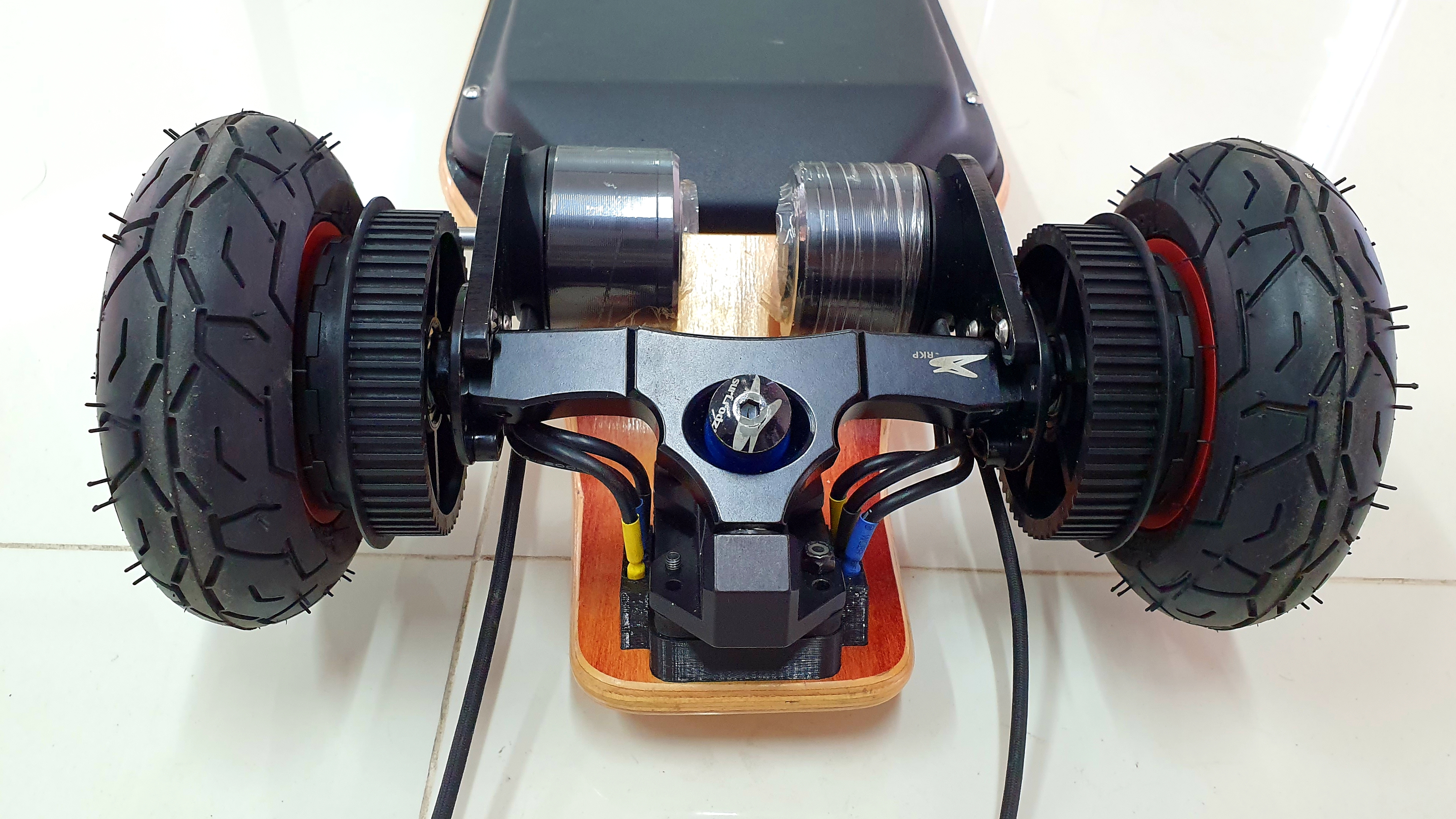 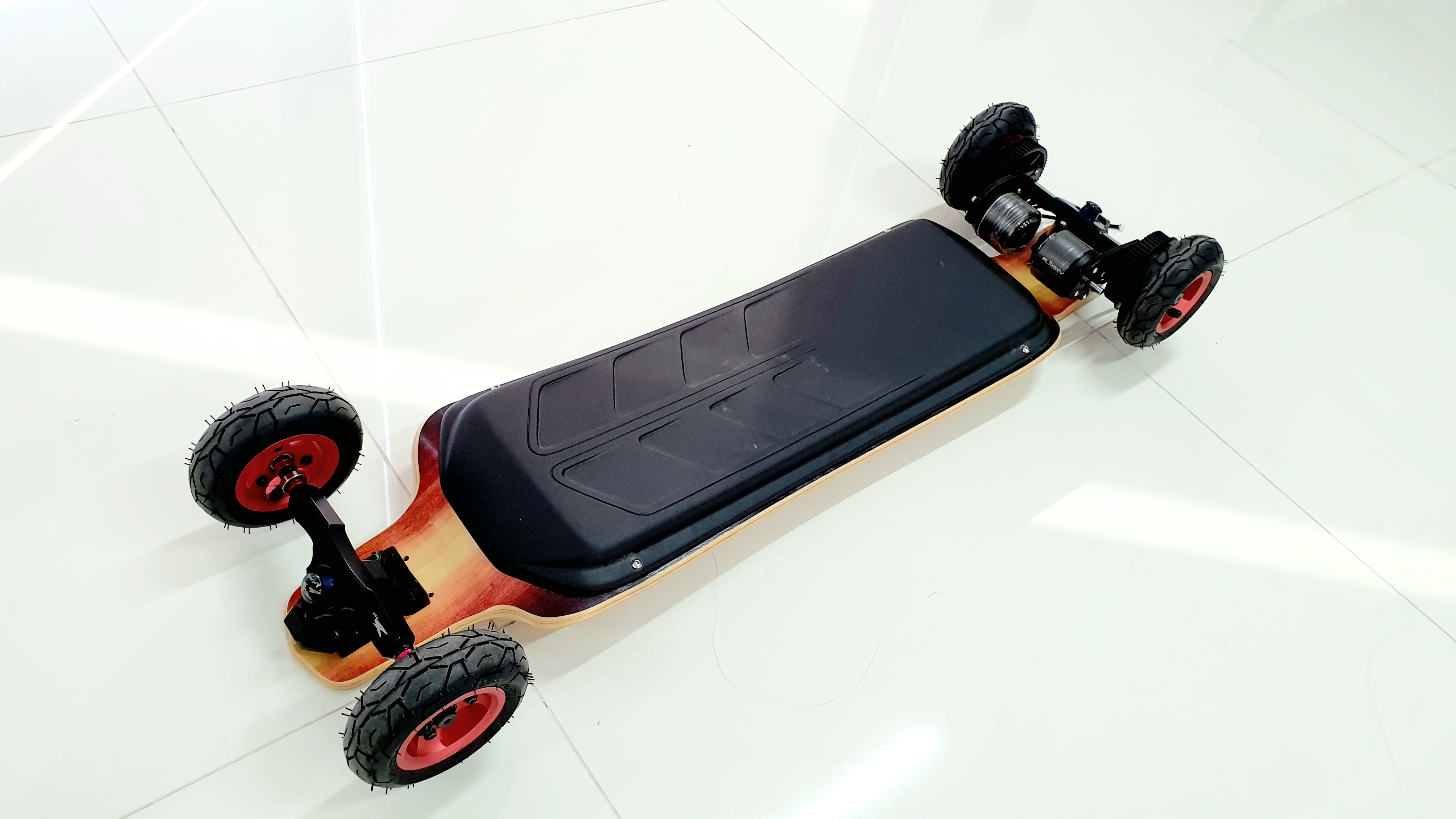 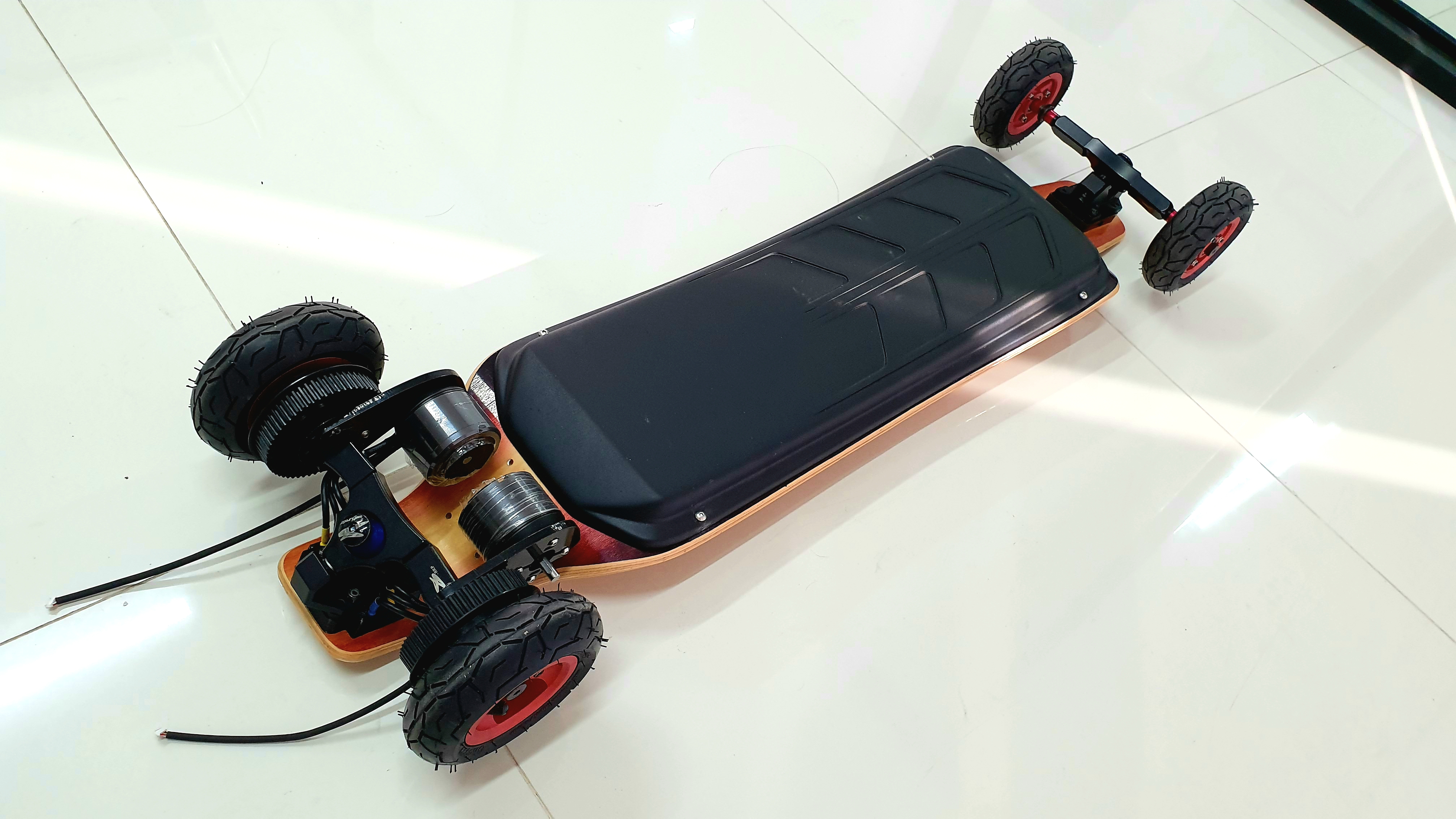 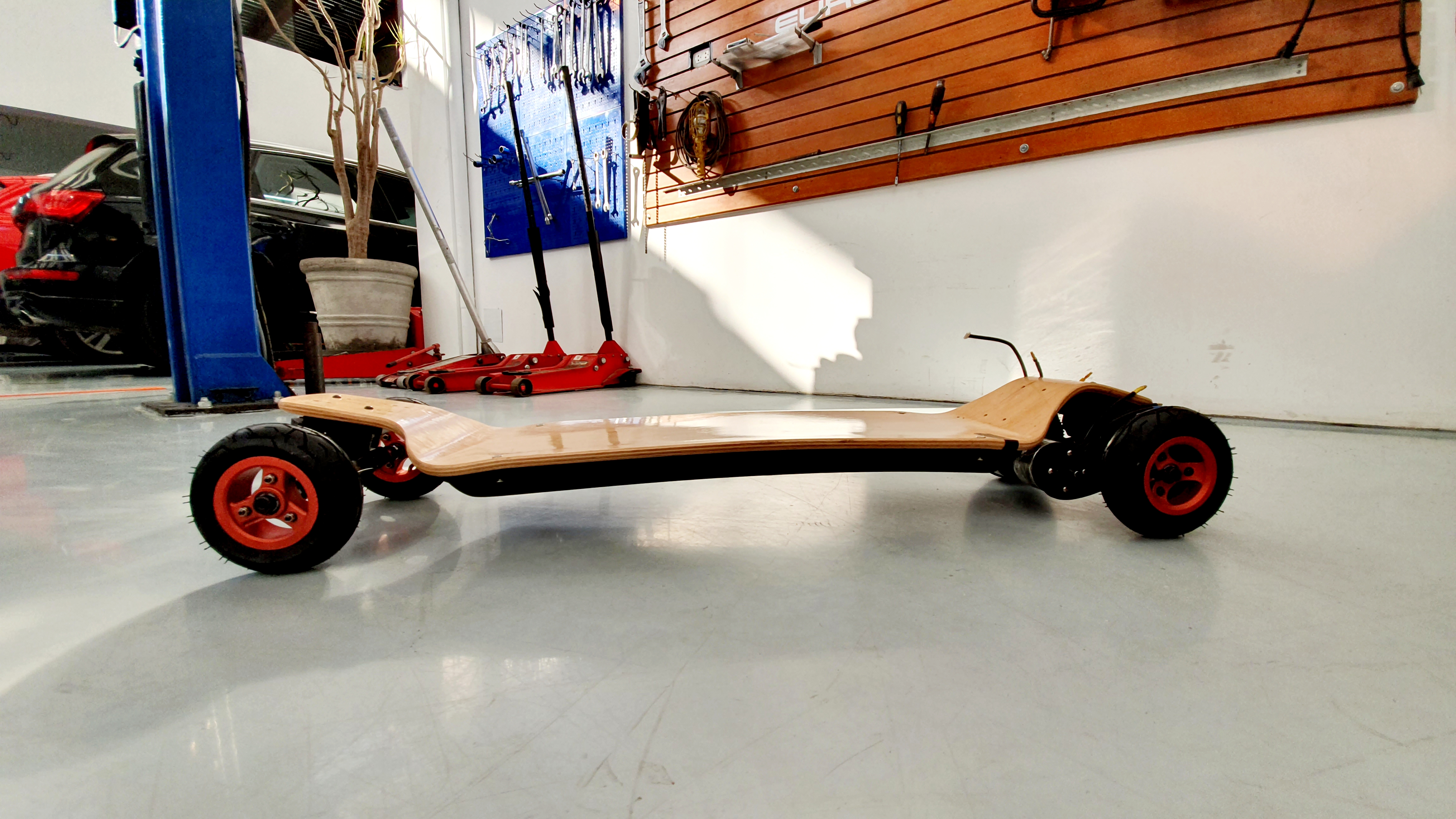 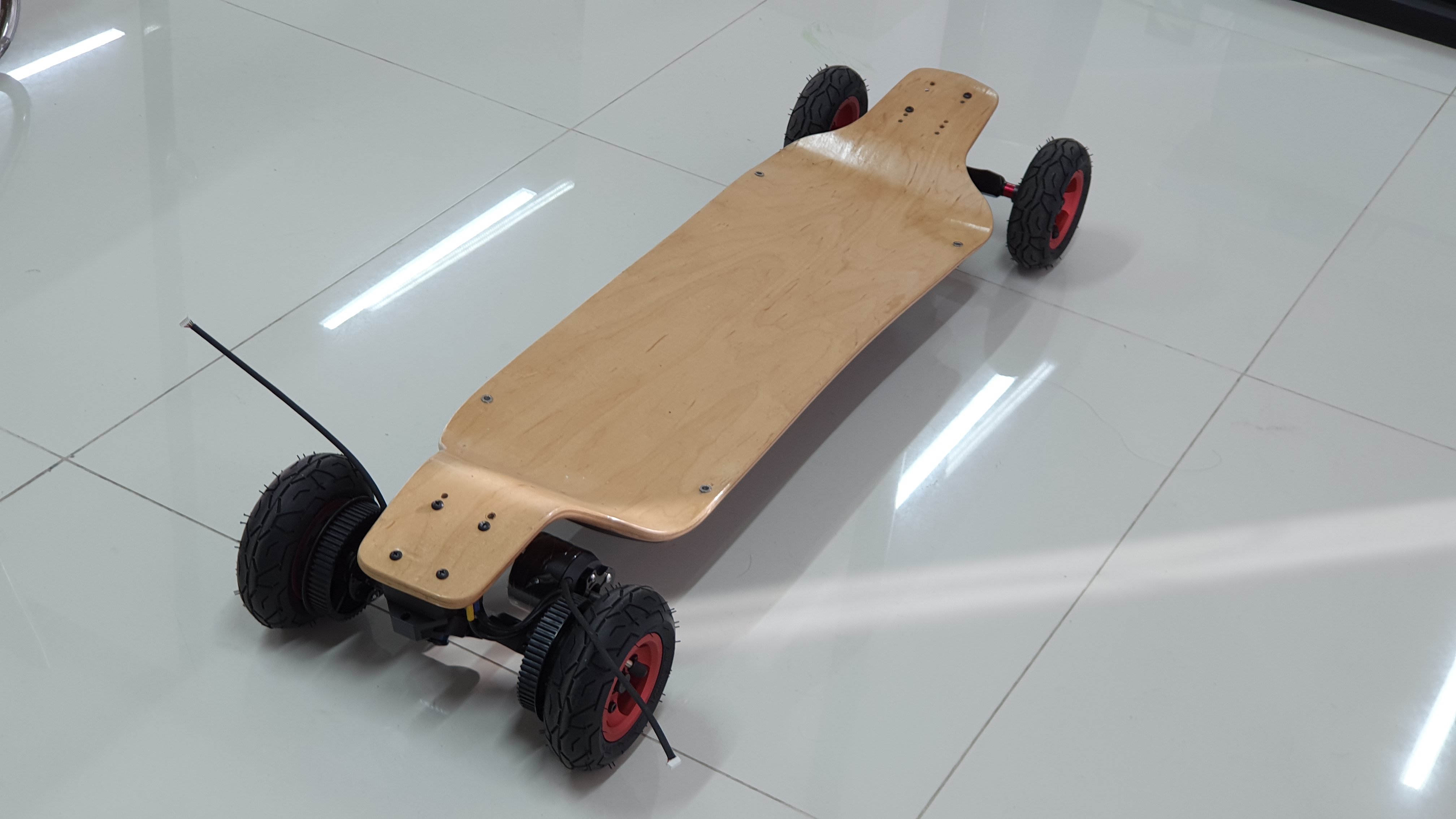 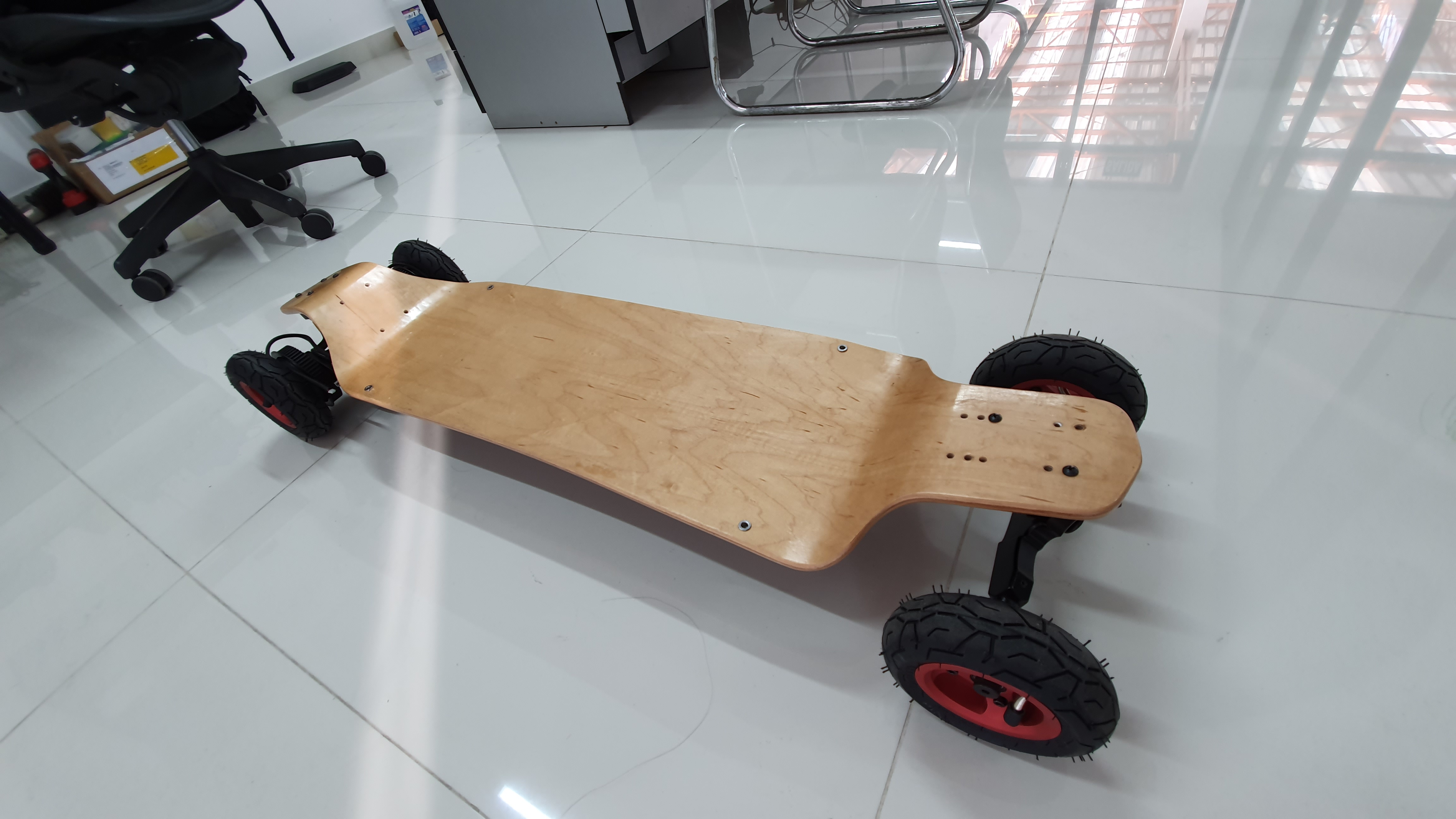 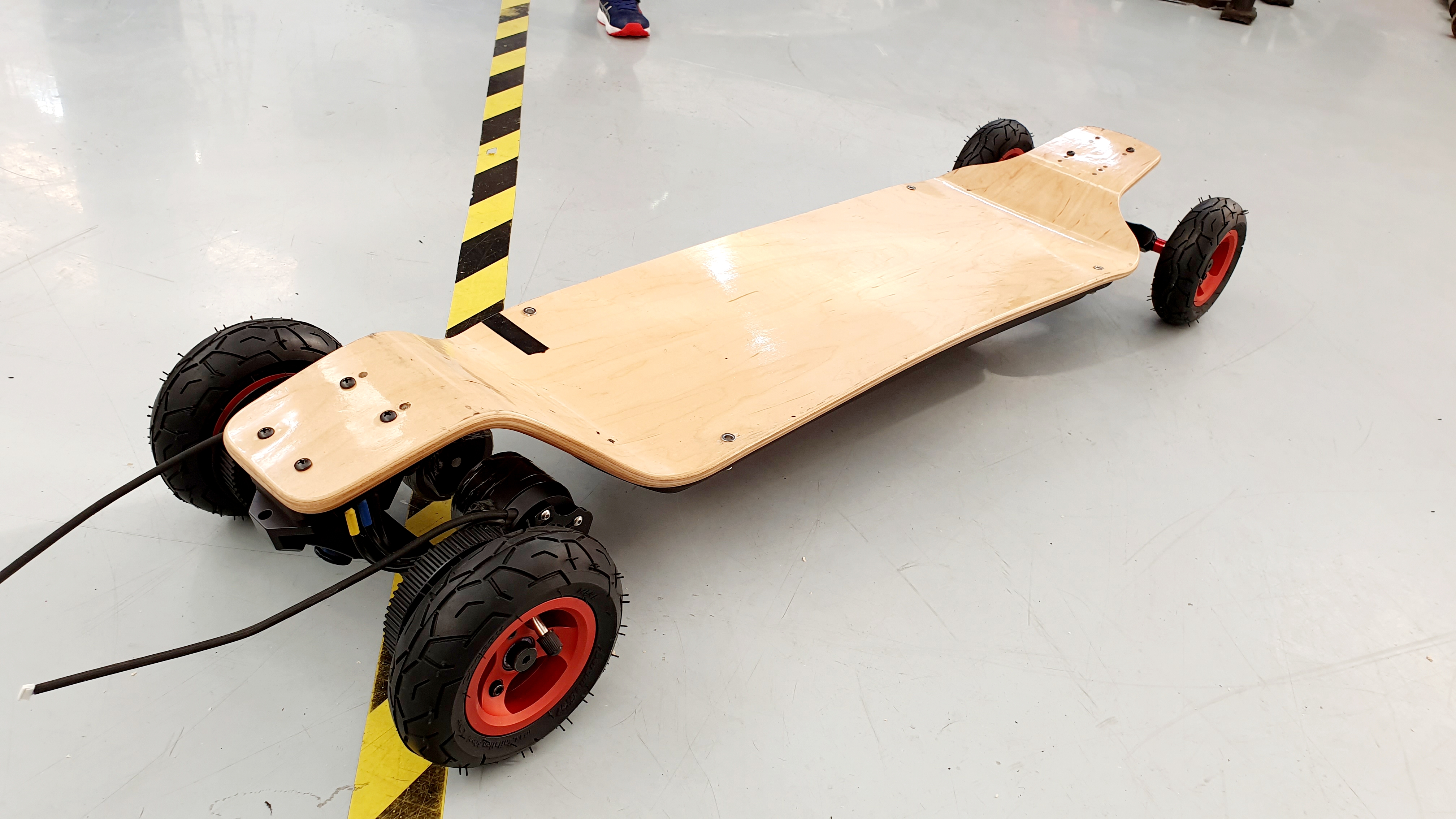 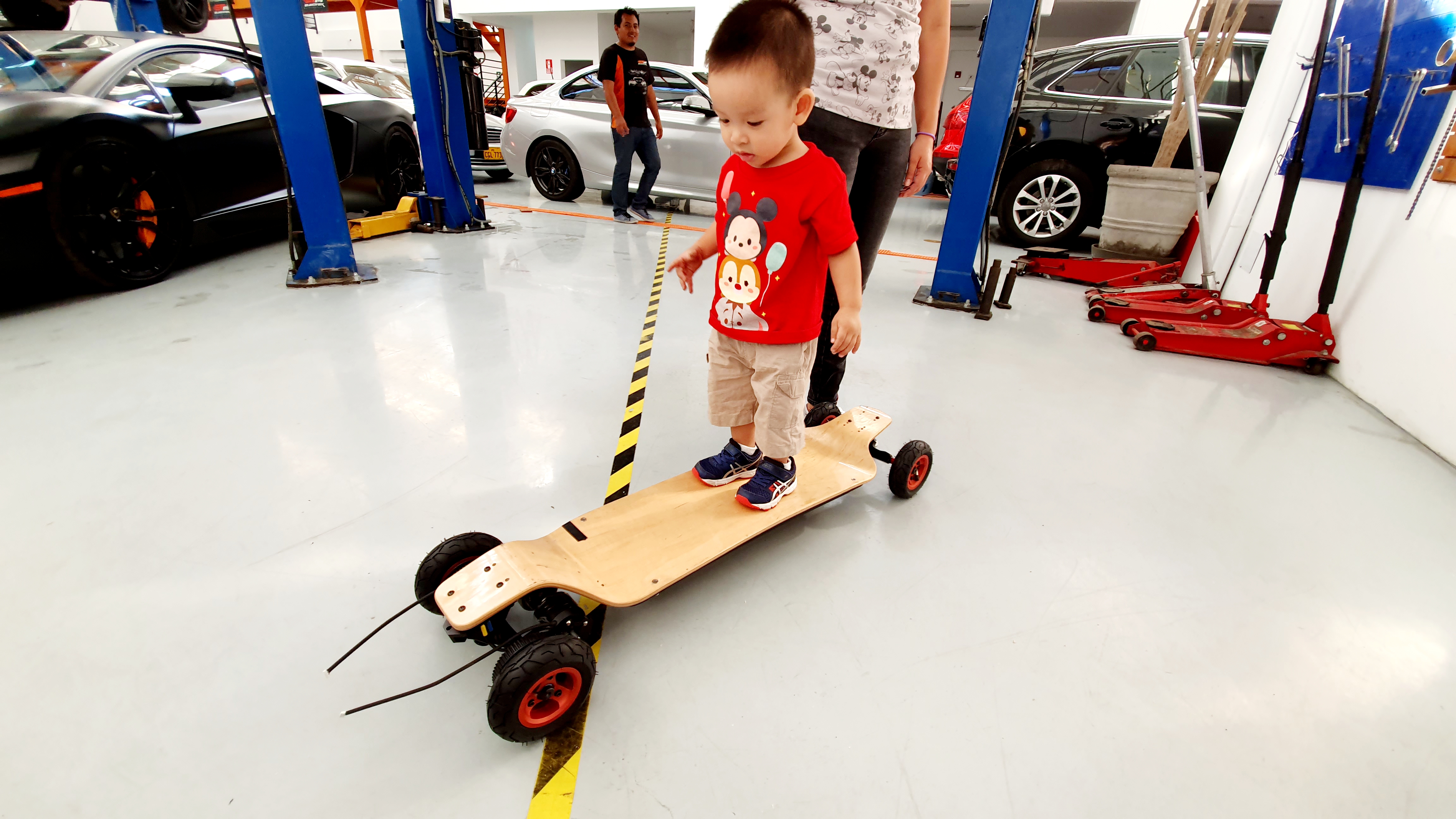 I’ll upload the progress, it’s more fun than post a complete built board when it’s already finished, I feel like I’m working along with builders

It gonna be memorable. Really like it. Plus this is the cleanest garage I gave nevee seen. I could eat on the floor. It looks dope too

love it … cant wait for updates

Definitely going to follow this thread, do you have a parts list now or are you just winging it? Wondering because i wanna make a similar just in a more all black colour scheme

A Trampa eMTB It can goes over ANITHING but as soon as I personally hit 30MPH I become a wobble machine due to my inexperience riding this type of board or potentially due to my lack of experience tuning channels.

@DerelictRobot you seem to be an expert on this matter, what would you suggest to avoid wobbles at high speed on channels while keeping your steering capabilities at low speeds?

Sure. The main point I’m trying to make here is that it’s inaccurate to correlate a negative riding experience or setup to a style of trucks. I wouldn’t go 30+ on RKPs unless I had a good idea of what the baseplate angles & bushings look like, the same applies to Channels. I have different setups for different course environments and speed range. Channels are also built to ride a drifting line, not straight downhill bombing. The riding style is completely different. I ride RKP, TKPs, and channels.

Could you describe your setup on your TRAMPA eMTB? What type of channels, what shore dampeners from front/back? Assuming holypro style deck with 35 degree end angles?

edited to include: sick build Alan and yes we’ll do one lol

I’ve been riding Trampa HS11 and HolyPro 35 for over 3 years, pushing it to full speed everyday, wobbles still happen everyonce on a while, even more when you find unexpected road imperfections, the second issue happens as soon as I reach full speed, everytime one motor stops accelerating more than the other as soon as you hit maximum speed, this causes a pretty noticeable high speed wooble, this never happened on Surfrodz RKPs in fact they are massively more stable, you can relax and just bomb it to the max. I agree with @deckoz with his trailing vs leading point of view about channels.

Unfortunately, I wasn’t ever able to compare my channels riding techniques against other pro riders, since there are no builders or diy boards in my country, so I really don’t know how good or bad am I at riding channels. Nevertheless, I ride pretty aggressively pushing the throttle to the max on every corner.

It sounds like you’ve got a decent amount of riding time under your belt on MTBs. What size tires, what is your dampener setup, and are you dewedging your rear trucks at all? Belt or Gear, FOC or BLDC?

I don’t experience the top-speed wobble you’re describing on either of my gear drives. I’ve felt it more with belts but that wasn’t even on a MTB.

I’m certainly not what I’d consider a pro rider, I just had a good number of seasons in analog mountainboarding and kiteboarding growing up and in my 20s. Like every board I’ve ever ridden- they need to be tuned in to rider preference and course environment. Any board I’m bringing to 30+ I’d expect this of, regardless of type of truck.

What size tires, what is your dampener setup, and are you dewedging your rear trucks at all? Belt or Gear, FOC or BLDC?

6.5" urban threads Not dewedging at all Gear drives FOC

Hopefully this isn’t a complete derail from your thread, we can ask the mods to branch it off if so, but I’m enjoying the conversation nonetheless.

As I’m sure you’re aware, wobbles do largely come directly from rider reaction to uneven terrain. I’ll share a bit of my personal riding experience and commentary, rather than try to tell you things you likely already know.

I guess the only thing I’d recommend trying out is to dewedge your rear to like 28-30 degrees. If you’re using TRAMPA channels I’ve actually got a printed wedge (5-8 degree / wedge & dewedge variants) that has cutouts for spring tensioners and covers the entire baseplate footprint. Was planning on putting these up on Thingiverse eventually but can get on that if you’d like to try them out.

I’ve been riding my LaCroix deck at 36/30 but removed my front wedge and have just been riding a looser damp setup- nothing in the front and reds in the back on 8" pneums/SS hubs.

For Barrett I was running 7" nearly-slicked Innova Inlines & reds front/back. I don’t think I got above 34mph on my test runs downhill but that was due the somewhat gnarly track conditions- at higher PSI I was having to bear down pretty hard on the front trucks to keep my board from popping up too much over the crags.

Geardrive- what gear ratio are you running? I’m curious on your issues with max-speed with the motors not being at the same speed. Obviously there will be some variance there but the larger the gear ratio the less pronounced this is. I’ve run into it on one of my higher KV (220) belt drive Urethane setups but that was at 1:1.8 so the difference in speed was much more pronounced than the 4:1 Kaly drives I ride on more regularly.

Do you ride with bindings? That could also be a factor- I don’t love riding at 30+ with bindings on simply because I can’t shift my stance and tuck in like I can free footed. The cowboy stance I see a lot of people locked into feels okay at lower speeds but I need to tuck if I’m going to sprint at a straight line.

For the record, not trying to argue that channels are the best solution for bombing a straight line. Channels are most stable for me running a slightly drifted line. I just personally haven’t run into any wobbles that weren’t the direct result of my own over-reaction to terrain, and they don’t oscillate in the same manner as I’ve experienced on TKP/RKPs.

Of course YMMV, everyone rides differently and I would never claim anything as an absolute. I just have seen the statement of “channel trucks wobble at 25 or 30+mph” thrown around a few times, and that directly contradicts the personal experience of myself and my friends. I run two MTB builds that both can do 36+ (depending on configuration) on flat even with a heavier rider such as myself. @Skunk recently got some ride time on my Carver with a 4x reds setup & then 0/2 reds setup and had zero issues bringing it up to top speed without even the notion of wobbles.

I run 4:1 Kaly gear drives and no bindings, I also do hate the cowboy stance they give you, it’s just silly

FWIW I did reach 35mph without wobbles with an old configuration, trucks springs loaded to the max and yellow dampas, both front and rear, outter spring position. However, low speed turning was ridiculously ineffective, I had to literally hope of the board on every corner unless I was at enough speed by using my weight momentum against a carve.

What I might try is to dewedge the rear and loose both front and rear trucks, that’s a formula I haven’t tested myself. As channel trucks are leading and not trailing they will always be subjected to a nervous steering behavior on uneven roads, that is why turn my head into this dewedged Subsonic Century with RKP raked trucks

BTW I increased the wheelbase a little bit, this would serve two purposes, creating more space for inwards motor mounting and having a nicer overall better looking esk8. 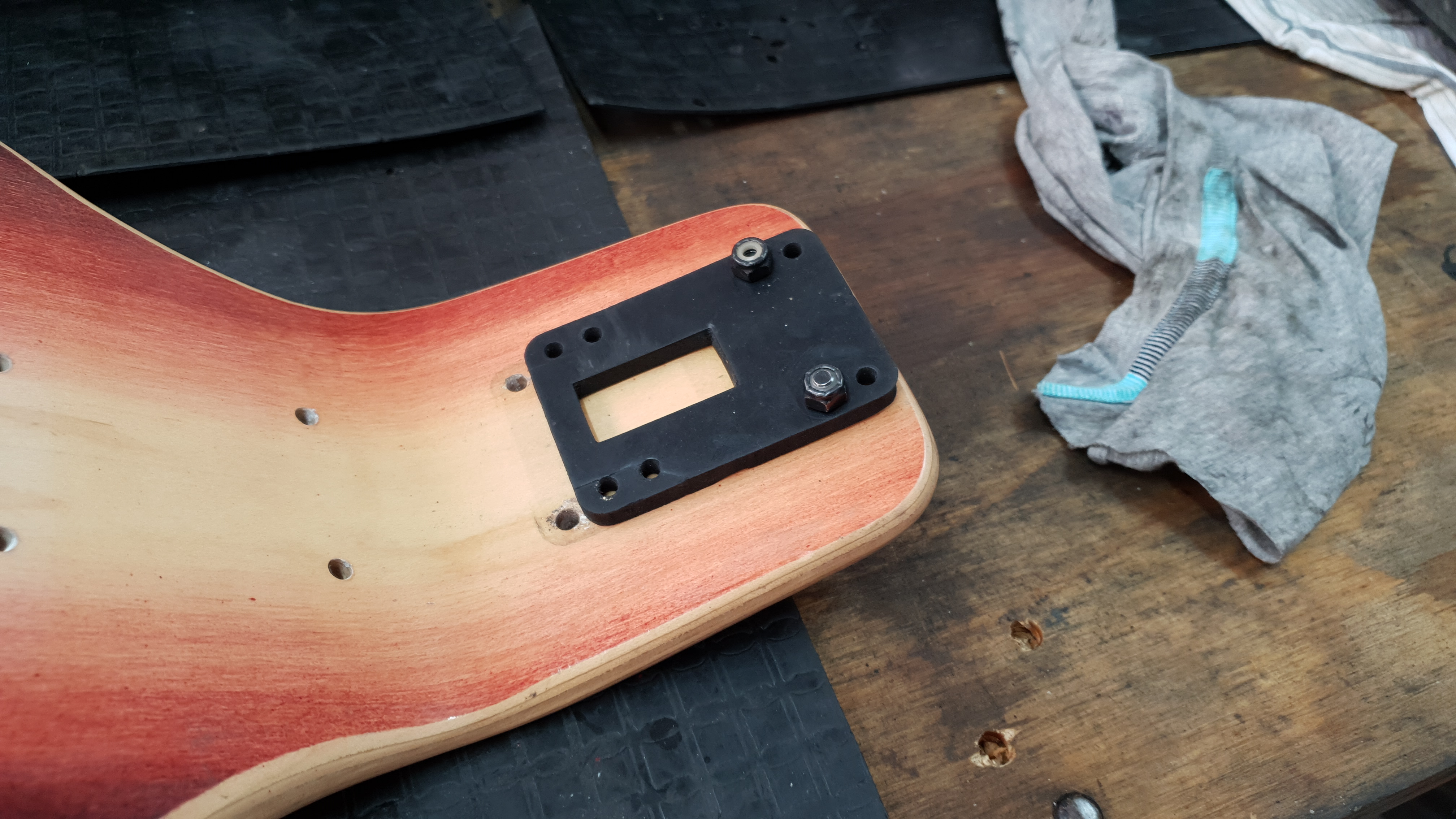 I also do hate the cowboy stance they give you, it’s just silly

Agreed entirely! Ha. I don’t mind them with kiteboarding/downhill MTB, but I need to be able to use the dancefloor and shift around as needed to feel confident at higher speeds.

However, low speed turning was ridiculously ineffective, I had to literally hope of the board on every corner unless I was at enough speed by using my weight momentum against a carve.

Yep. 4x reds feels like a big tugboat below 15mph. Not nearly as much fun and I personally didn’t feel any real improvement in stability at higher speeds. The boards are so much more fun running looser setups anyway.

Yeah, I dig the build. I’ve got something similar with 200mm SR RKPs & 97mm Zoobombs at the moment and am building a TKP on a 44 w/ Haggies next.

Nice build Alan. As always. Have you ever ridden a dewedged deck before? They don’t like turning at all. lol. Be a whole lot better with the sr trucks I imagine but with the tb’s they can be a bitch to set up. I liken it to a holy grail quest to have low speed carving and high speed solidity. Still love it to bits though.