Got far enough with my build to share it. Main concept was to build something so ridiculous and poweful that i will never want to build or ride anything else. Figured that some Guiness Records can also be made. Completely disregarded difficulty and cost (currently estimated at $9k). Someone is sure to comment that with such budget one should buy two Bajaboards - my answer is that my board will be faster while PULLING BOTH Bajaboards with respective riders than original Bajaboard and will get further on a single charge, while pulling. After debating for a while decided to go for 20S bencause currents are half of that on 10s and battery pack will fit nicely under entire deck. Ordered 260 pcs of LG HG2 cells (same as SONY VTC6 only twice as good cycle life). Arranged at 20S13P. Photos as follows, including that of elastic 8x2,5mm2 joint between sections: 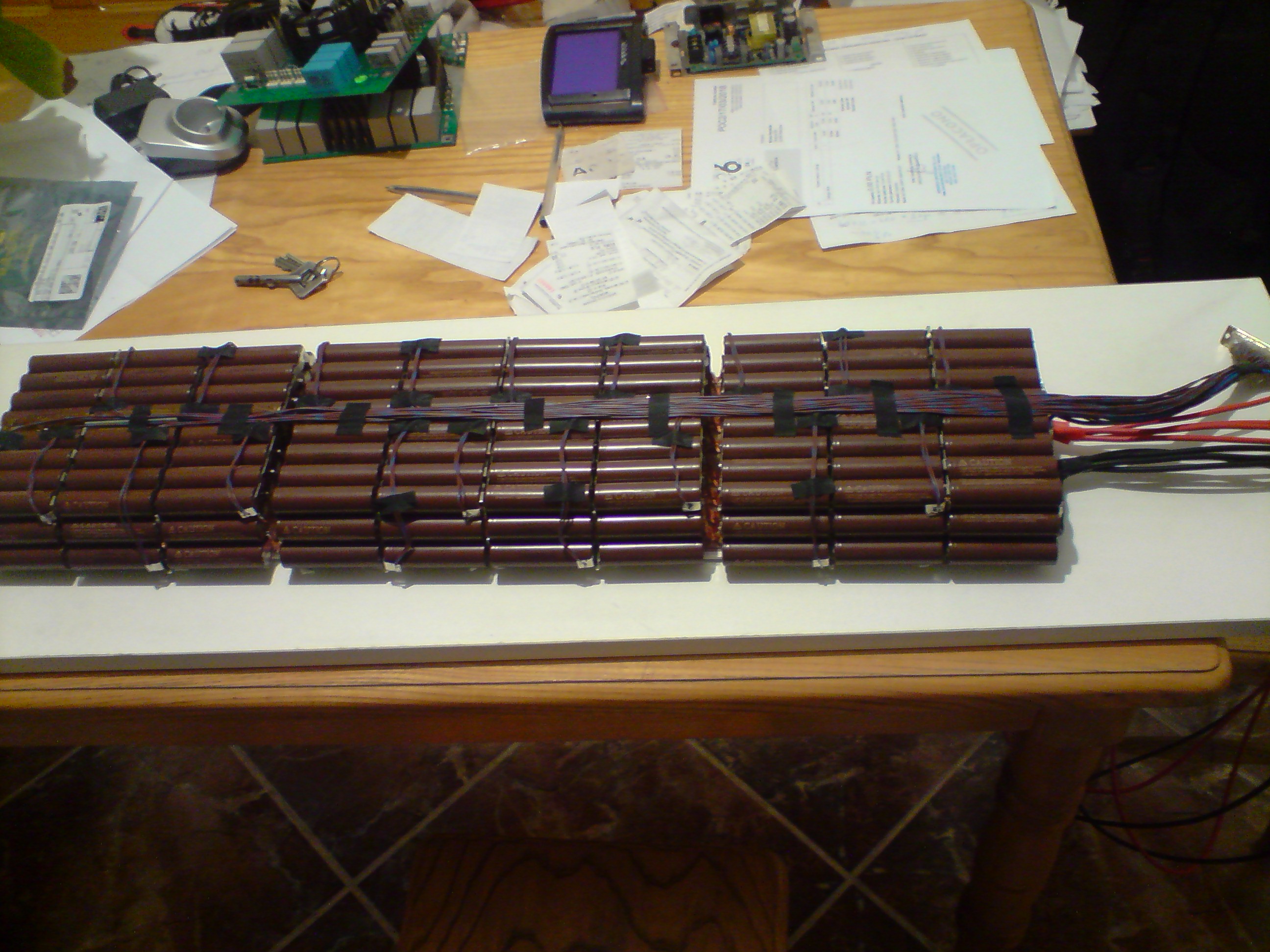 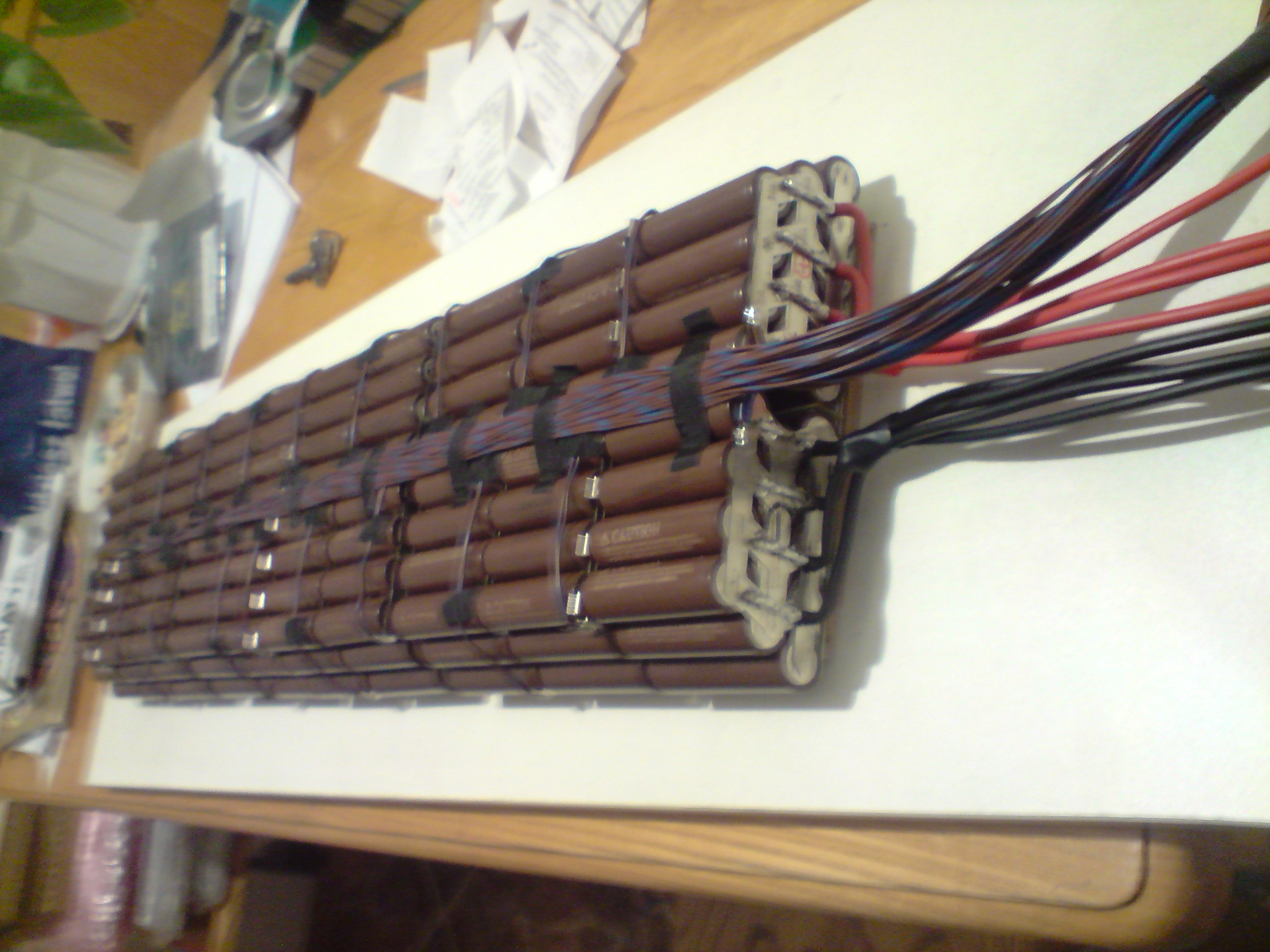 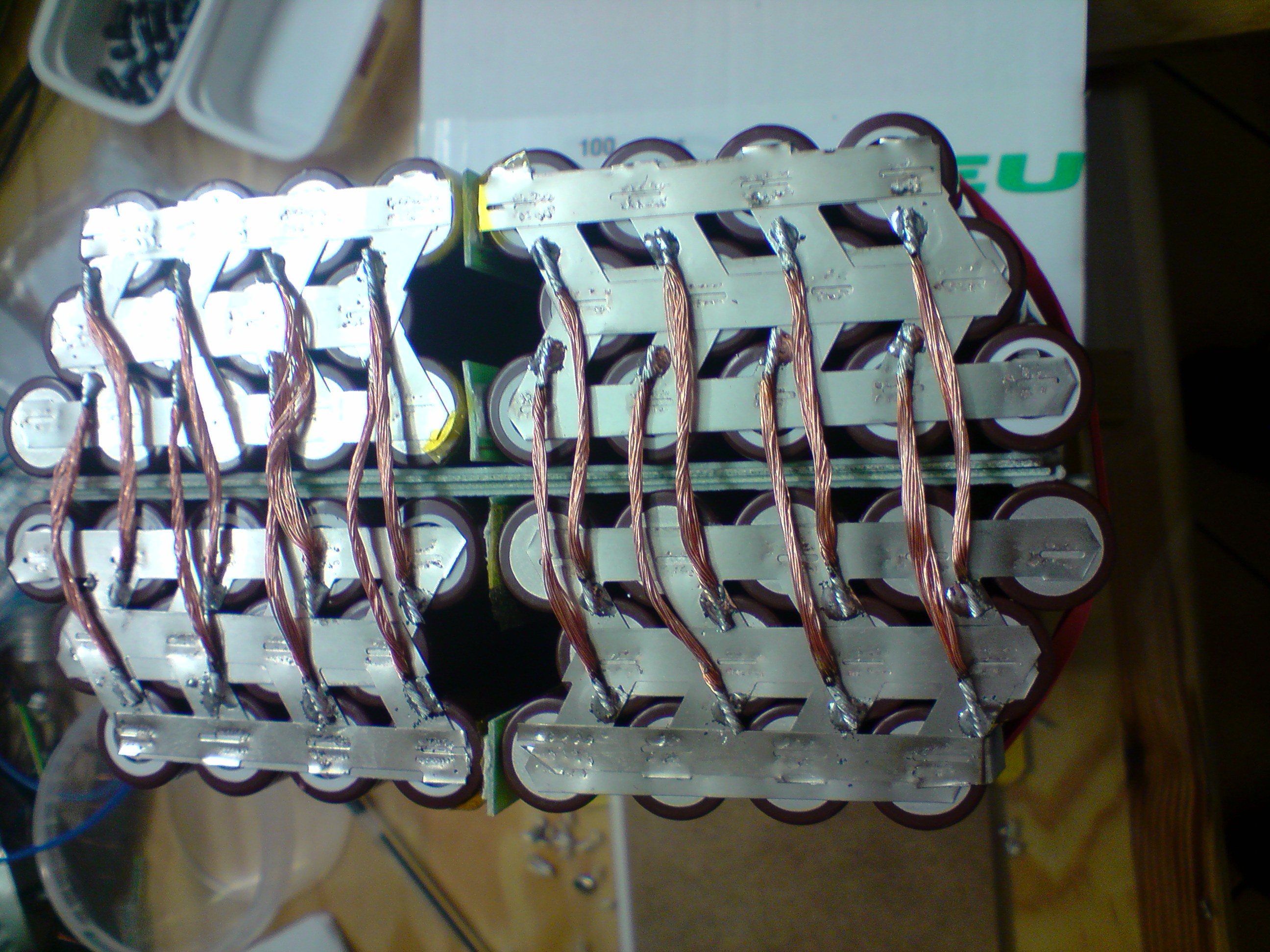 Battery is 700mm long, 220mm wide, 50mm thick and weighs 12.5 KG. Can supply 260 Amps continous and about 600 for 10 seconds at 72 volts sagged under load 84 volts nominal. It has 3000 watt hours capacity, several times that of any other build i have seen. It will go into moulded monocque carbon fiber casing under the deck. Deck itself is custom made , photos to follow when finished. Now making mould. Similiar in shape to NEXT BLACK CHILI but thicker stronger and 100mm longer, 300 wide in center. Trucks are modified Trampa Infinity - strongest i could find, did not want to make my own. Axle was removed to prevent temper loss and bracket welded at the end of the truck, then machined and axle inserted again with glue. Bracket holds motor stator, rotor is the wheel hub itself. Real Hub Motors. Photos: 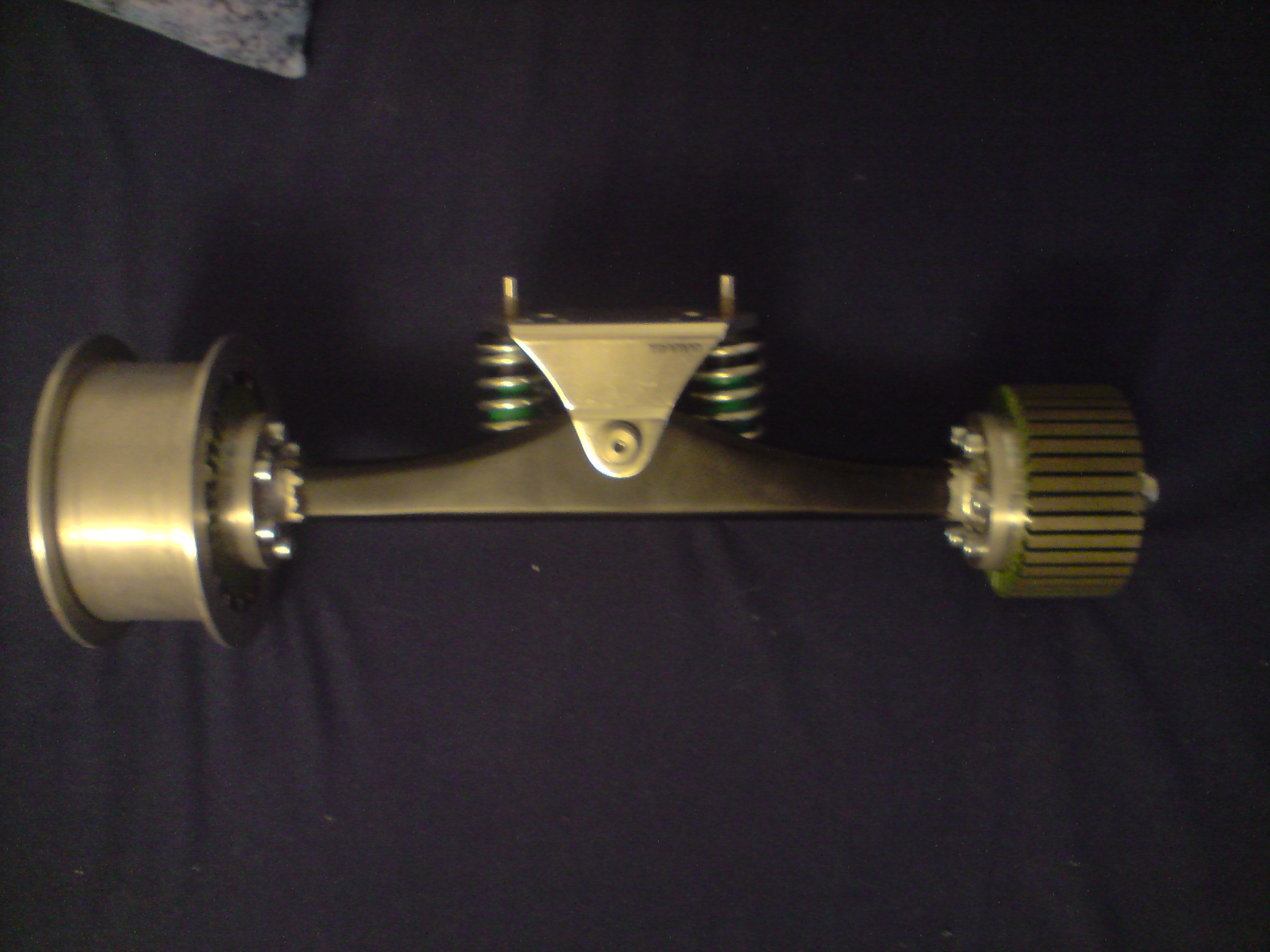 Motor stator is taken from these motors: http://store-en.tmotor.com/goods.php?id=330 3 such motors are taken apart, windings removed and iron core stacked and press-fit onto self-made retaining cup, which connects by screws to the welded flange. Per each wheel. 12 total. Then winding with copper strands will follow, for targeted 50Kv, at 1 turn per pole, under 8 AWG thickness. Motor continous current 150 amps, 350 for 10 seconds. 60Nm of torque per motor, 240 total, which at tire radius of 125mm gives 195 kilograms of driving force. Enough to smoke all four gokart supersofts at any speed up to 80 kph (50 mph), when power limit of the battery takes over and torque begins to drop. And wheel hub: 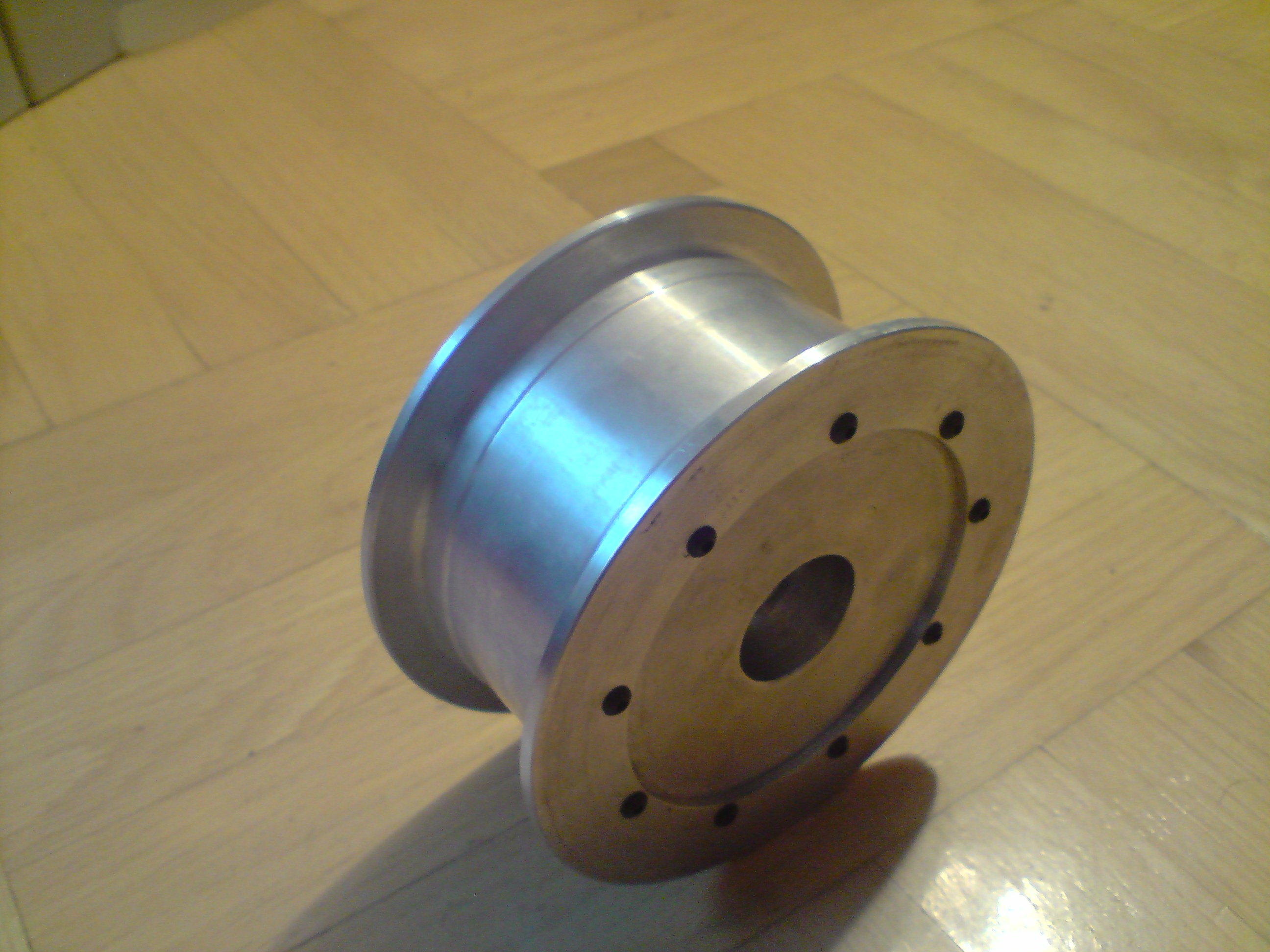 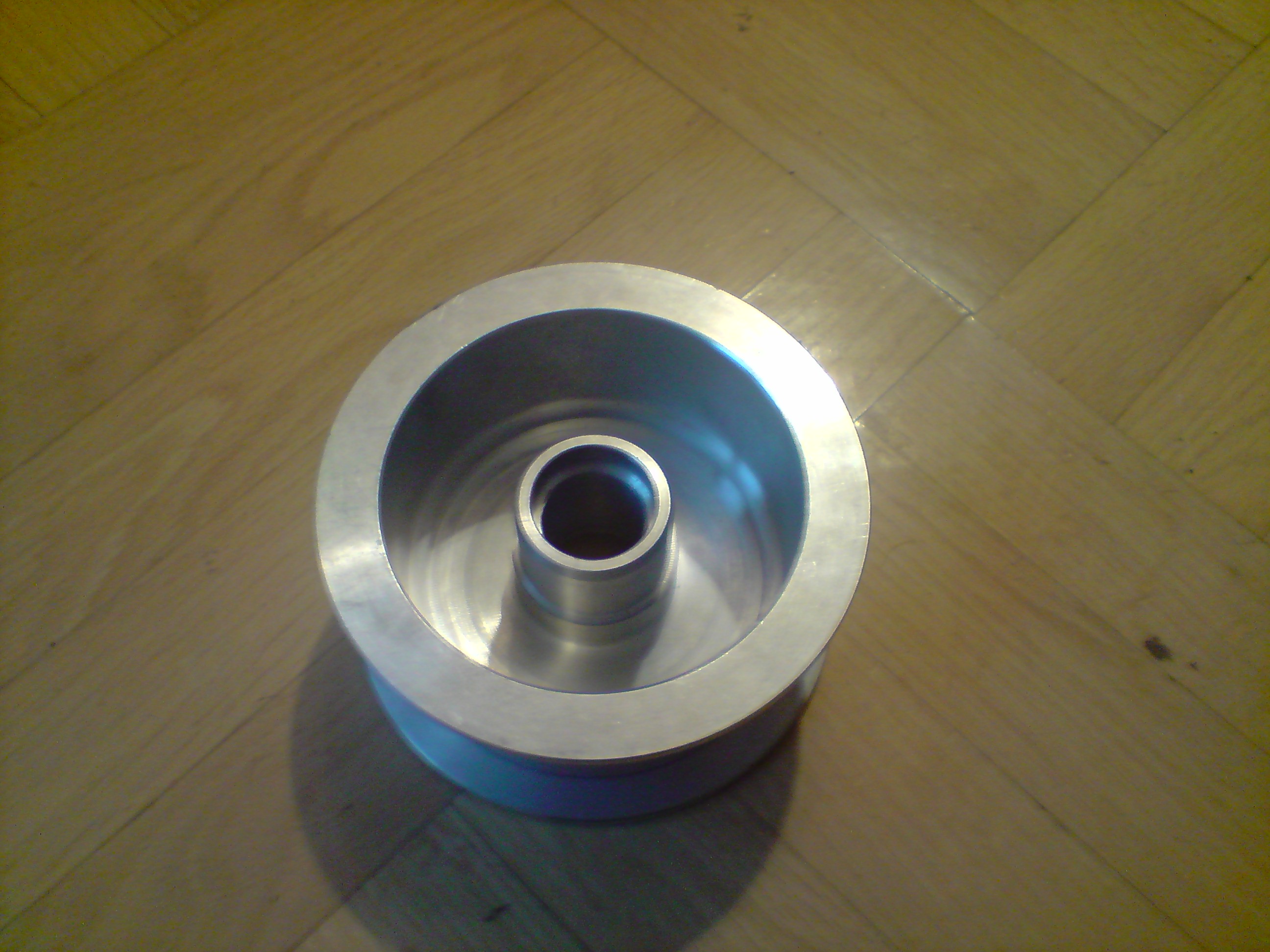 Magnets of N52 power are then glued inside of the hub, photos to follow later when all finished. Tubeless tire of 9 to 12 inches diameter is mounted by removing outer ring, held by 9 black screws. Later an ring adaptor to mount tires with 5in internal diameter is planned for the board to use gocart supersoft slicks (crucial to use power at 1,7 friction factor). With such engines board will do 100 kph (60 mph) in 2,6 seconds with 70kg rider, about as fast as a liter sports bike. For cars only tire smoke will be left. All that is left is the ESC to handle such abnormal conditions. Designed based on VESC 4.12, from which an MCU and firmware is taken (i cannot program an MCU myself). Took about 6 months to figure out. Board size 100x92mm. 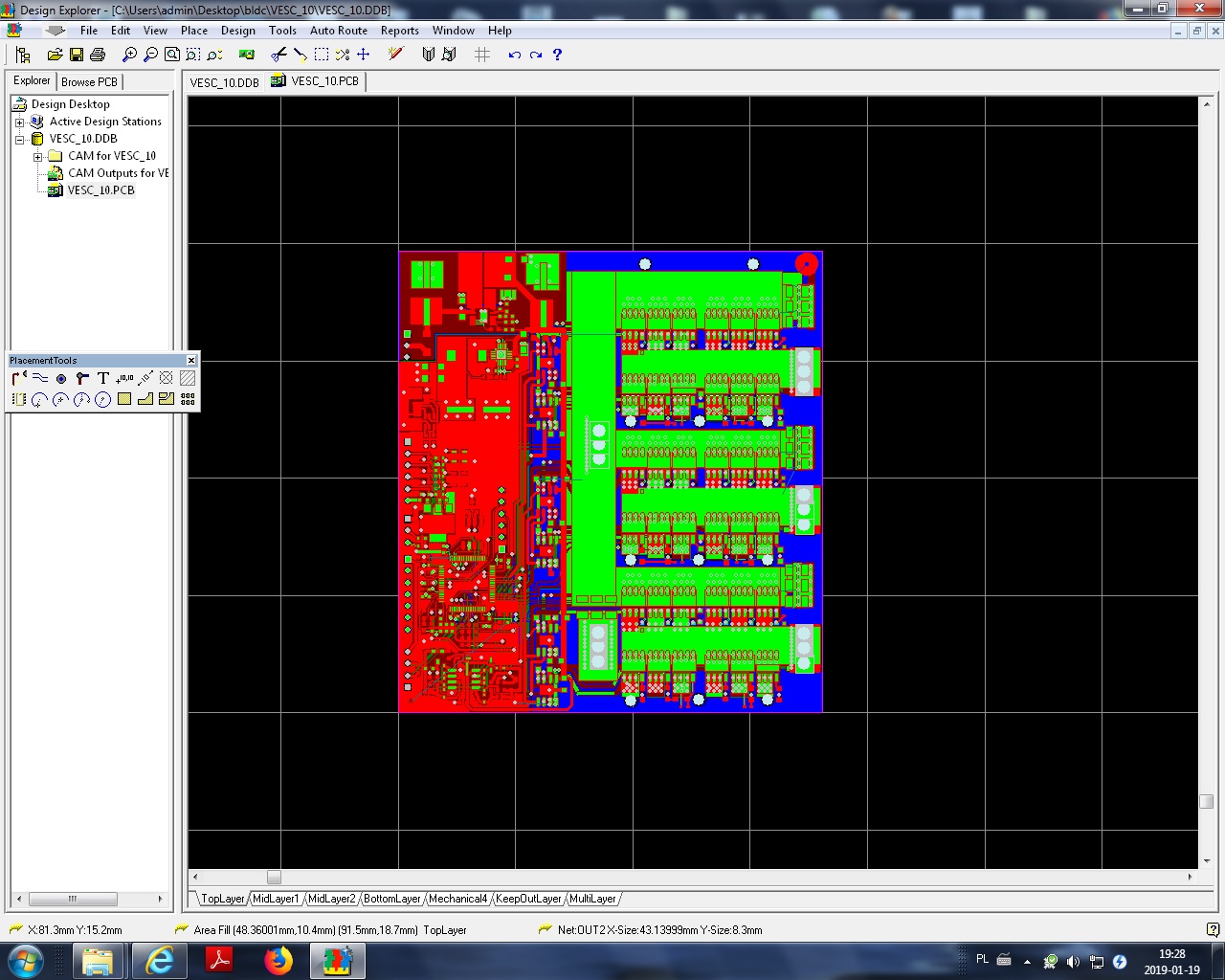 Power stage designed from scratch, features 36 power mosfets at 0,6 miliohm equivalent resistance per branch. Currently waiting for the PCB (ordered custom made 4-layered 3Oz copper boards in China and waiting for arrival, should come before january meets its end). Assembly will be done by me in a proper reflow oven and will take about a day, parts already stocked. Absolute limits should be 150 motor amps continous without cooling, 300 with good cooling, 600 pulsed. At 20S. Per ESC. There are four of them.

That is all for now, updates to follow whenever i have spare time and money (conjunctive).

What deck you gonna use lol!

I love it. Keep it updated

No positive side paper isolators on this bomb?

holy christ, mother of god…do you need to climb out of hell? 🙂 Looks awesome, Im eagerly waiting to see some video of this beast in action.

This is the most insane esk8 related thing I have ever seen. 100 mph and a monster truck sized battery.

Only because you can I guess.

There is no need for them bencause of the way sections are connected positive of one section goes directly to the negative of next section. Only insulation required is between battery halves and it is present at 3mm of pcb laminate + pvc cable duct in the middle. Battery will go into shrink wrap after it is tested under full 600 amp load and every cell nickel strip welding is verified. 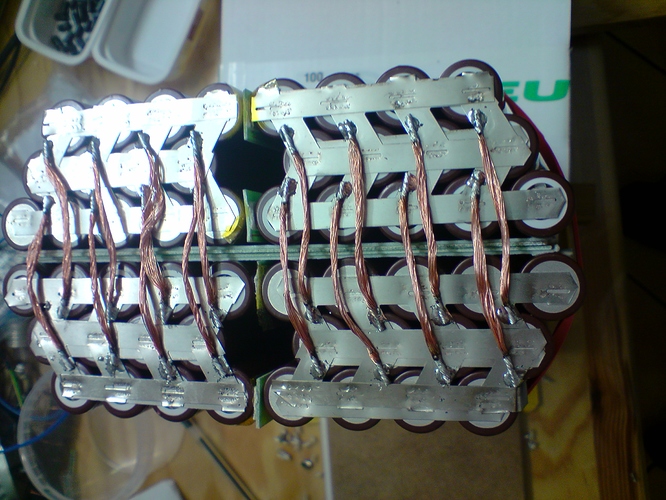 https://esk8content.nyc3.digitaloceanspaces.com/uploads/db2454/original/3X/e/e/ee21124ba1138d4e4c01aa1159cf625b6dc96ab9.jpeg Some of those sharp edges could cut through the insulation to the negative being squeezed in an enclosure. Very easy to do.

This is absolutely insane! What esc are you using?

I know but you can still short positive to negative of the cell itself, because negative wraps around positive and if you pierce top isulation which is very weak, you short it. Check out some pics of unwrapped 18650s.

Fortunately HG2’s have thick paper spacer just under the wrap (look closely), unlike VTC6, no need to double it, also when i looked at individual sections i tried to remove edges facing inwards with flat pliers. Unfortunately cell welding was done by external company and required some extra work, including wiring. They only welded nickel for me.

The weakest link are the mosfets. If replaced with different model it will handle 24S, but at the expense of increased equivalent serial resistance to about 1 miliohm. Not worth doubling heat output. At 20S i still have 20 volts margin left on weakest component, 40 volts on drivers and other circuitry.

How are you going to prevent the rider from being thrown off the board at such a crazy acceleration and speed?

Strapped to the board? Epoxy?

Good quality carbon snowboard bindings (= strapped to the board) + very low kneeling position, moved waaay over front of the board + extra hand holder for my left hand at the front of the board. Plus a lot of practice. And one loose screw.

And one loose screw.