Build a longboard they said - It will be fun they said. And yes! it is! This is my first voyage into the world of longboards - electric and analog alike. The reason: 14km commute to work where the bike path is generally in excellent condition. Electric bikes are limited to 27,5 km/h which is a bit to slow for my taste. So - the idea of getting an electric longboard was conceived.

I work in a fablab so the thought of building the board from scratch (or at least getting some parts and putting them together) seemed appropriate.

Wheels I know that a lot of you guys spend a lot of time getting specific trucks and specific wheels for your rides but since I had very little knowledge I thought it best to get a set. I ordered a complete 90mm kit with dual hub motors, trucks, front wheels and ESC from Alien Power System. I’ve later found that those kits can be found on ebay but well… Now I have them. The most annoying thing was I have to wait for 5 weeks to get them - what to do?

Batteries While waiting I ordered 50 cells (18650 type) from nkon.nl. I chose some 30A Sony cells rated for 3120mAh each (https://eu.nkon.nl/rechargeable/18650-size/sony-us18650vtc6.html). The plan is to pack them as 10S5P but since I can’t charge a 10S pack I will do 2 5S packs instead. I know more charging time and less automated but Just for getting the board on the road this should work.

Deck Now for the fun stuff! I had 5 weeks to burn so why not try to design a shape myself? I had very little to go on The only picture of the trucks mechanical layout was a vague description with some inch measurements on. well, I tried and came up with a general idea. The overall length of the board is 1m because… it felt good when I looked at it.

I’m designing in Onshape and things got a little out of hand. Now I’m designing everything, from the battery mounts to the covers to the electronics bay. I will try and post pictures of all the parts as they finish on the 3d printers. 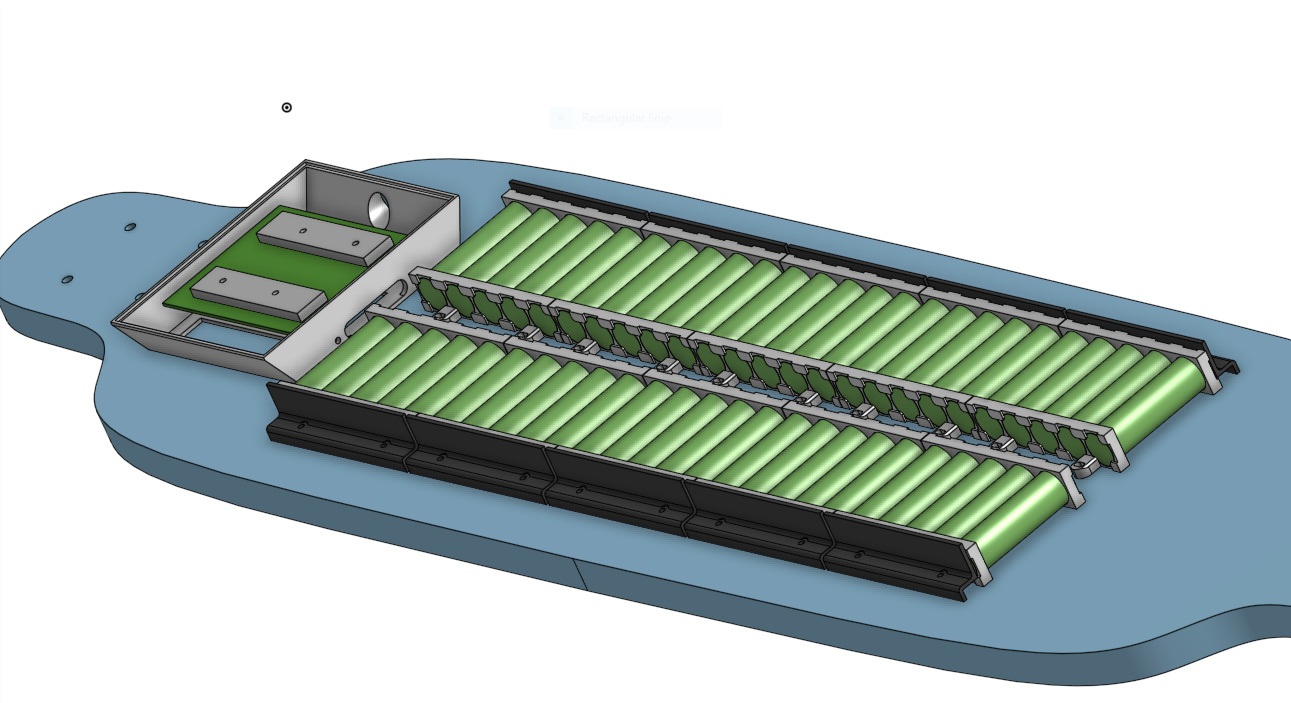 This is a rendering from last night.

Why you can’t charge a 10S pack? You gonna build a awesome vct6 pack and gonna split it whut?

Get a BMS from @koralle and voila

Well - I can’t charge a 10S pack yet… I got a cheap balancer/charger along with the cells from nkon but it can only do 6S. i do plan on building a BMS for the whole 10S pack but just to get the board rolling I will start with the two 5S packs I know it’s not optimal but it’s a start.

Thanks for the tip! I see that a lot of people on here produce their own stuff. However, I would like to build it myself. It’s about my pride about building the thing from the ground up. Specially the electronics since that’s what I do for a living

The deck fresh from the CNC (Maslow CNC which is a whole project in itself) I have did it in 18mm plywood and thought it was way too stiff but after jumping into it I think it has just the flex I want. I’m a heavy guy (100+kg) so I’d rather have a thick board that can handle the stress… 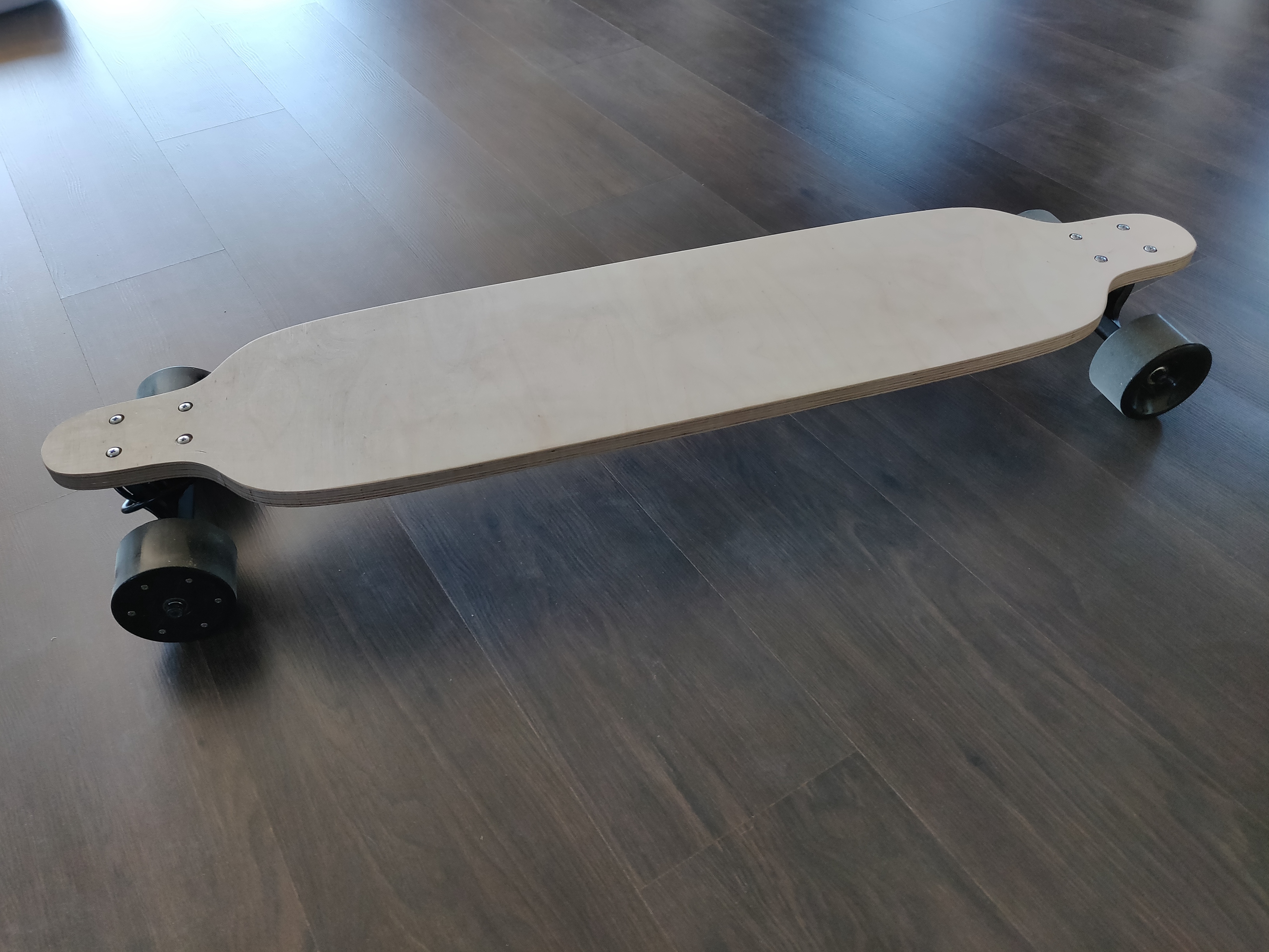 First picture with the wheels on! Looking pretty neat! But it’s my first and only board so I really don’t have anything to compare with 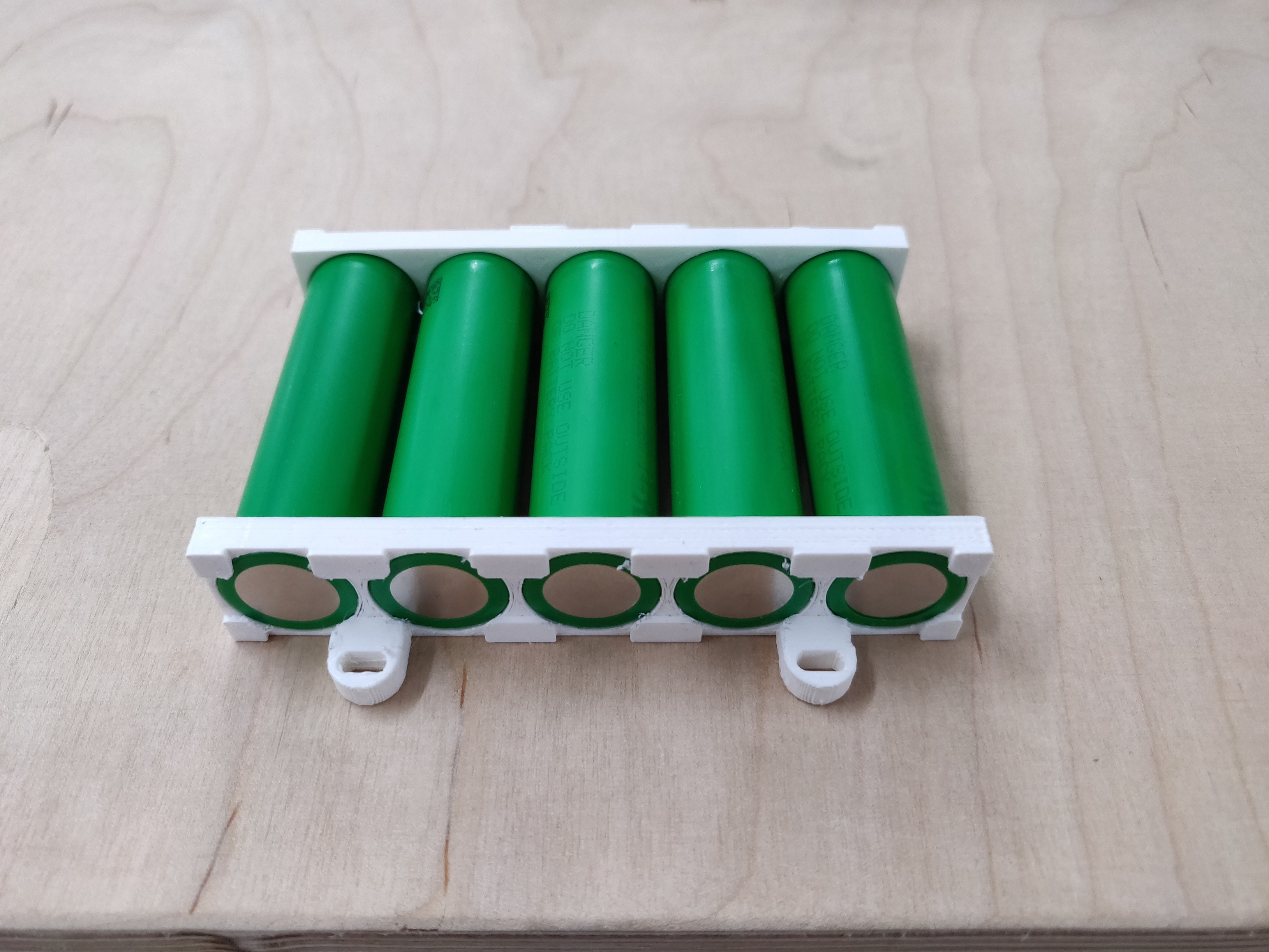 Close-up of the P part of the pack. I’ve redesigned this part a few times to get it right. To handle the board flexing the screw mounts are oblong in the flex direction. Inter-cell connections will also have some bending properties 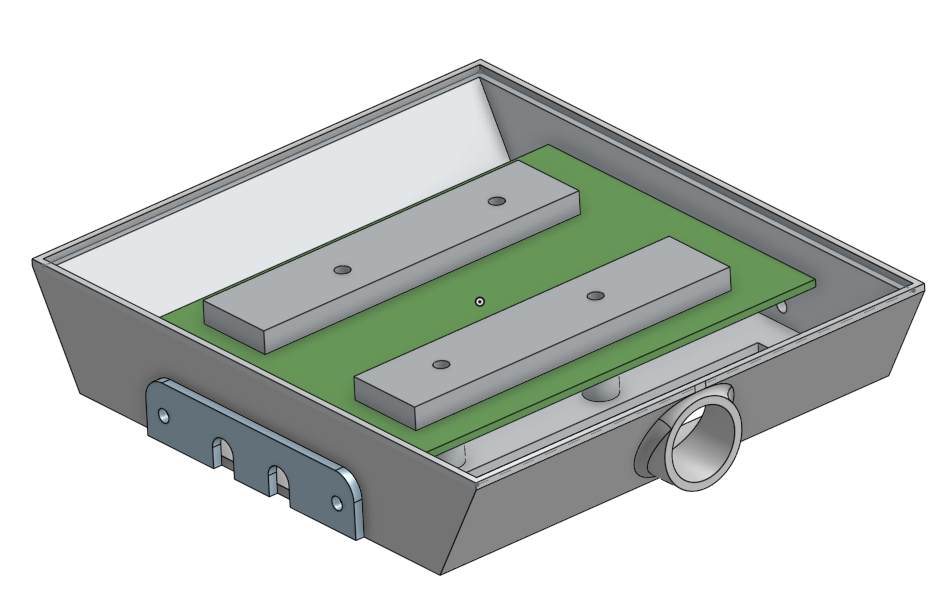 Some more details on the electronics bay. This was modeled from the motor driver that I’ve got. The square pieces on top of the (green) PCB are the heatsink mounts for the FETs. The height of those is matched to the recess going around the perimeter of the enclosure. I have made a heatsink that fits into the recess and thus closes up the electronics bay when installed.

The part on the left side is a cover for the wires that go to the motors. I only have a single wire to each motor fo the part slides down and fixates them. it’s secured with two M3 screws. 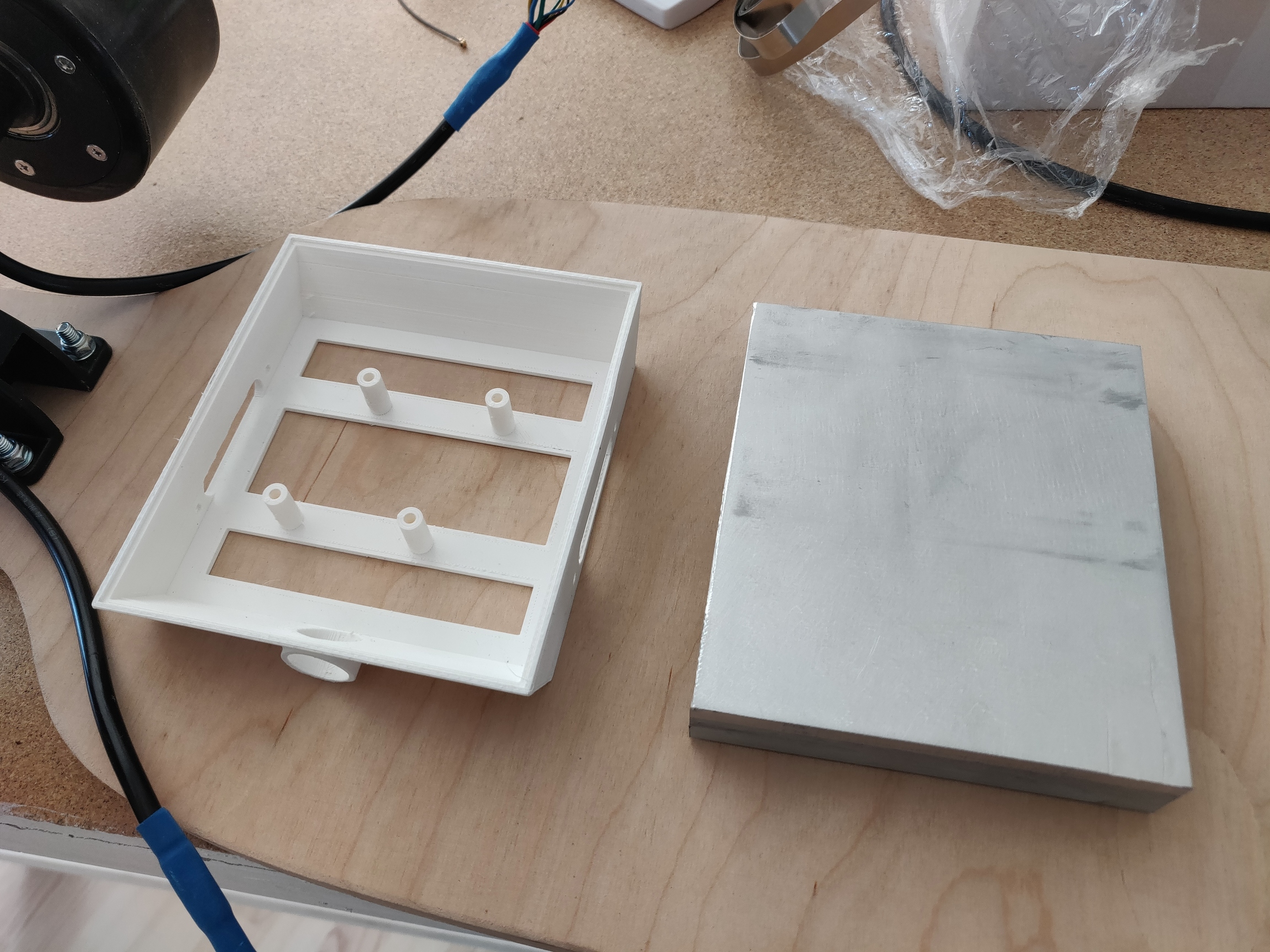 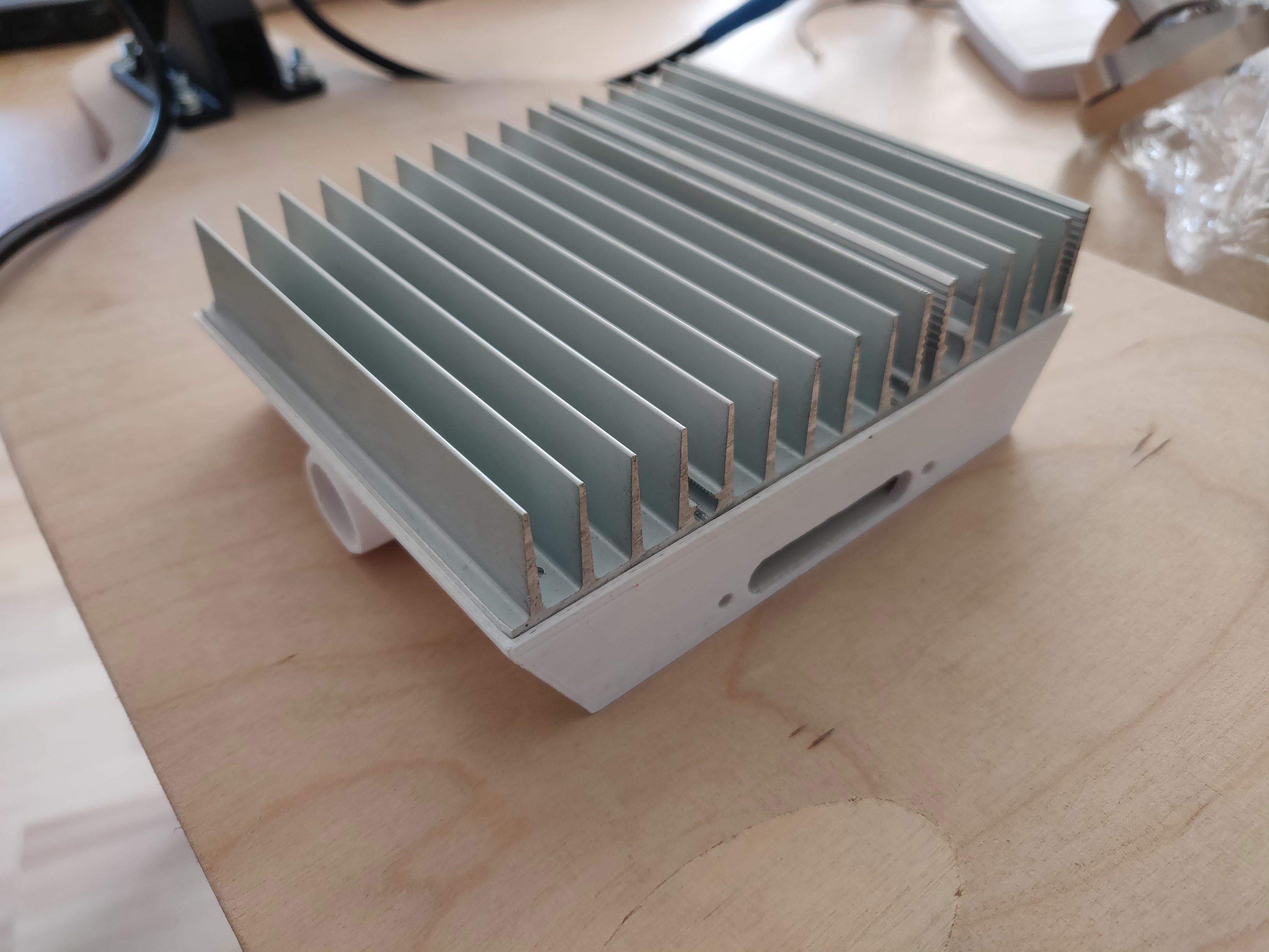 Aaand on top of each other. The cooling find will be downward and my hope is that the airflow will keep the heatsink cooled

If you’re CNC ING your deck, why not do it like @Hummie deck? 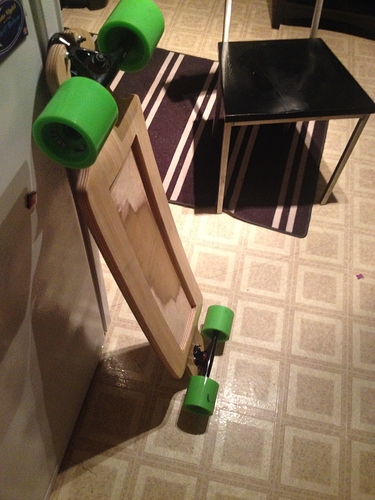 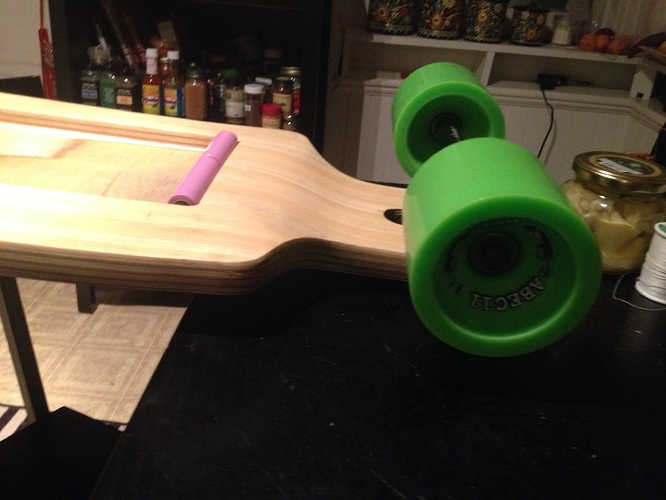 dang, that looks sweet! I do think that he’s got some double-sided machining going on and my cnc don’t do that happily. Also I’m as green as it gets with regards to building boards

The recess for the batteries look really nice! That’s something I didn’t even think about. Maybe I should redo the whole battery protection thing I have going on… Currently it’s 3D printed all the way byt a plywood enclosure would be far more durable. Thanks!

Nice build going here, I’m thinking of doing the same for my deck. Did you just use normal plywood? And I would be careful as the most likely point to fail is the nose and tail, maybe some fibreglass would help to strengthen it. HobbyKing has cheap fibreglass if you need it

How to balance charge a 12s battery pack

My old RC chargers didn’t go above 8S. Here is what I used to do to charge higher packs: You need to have 2 independent batteries: Battery 1: Main negative needs 2 wires, one connected to ESC connector ground and second to charging connector 1...

Or to get an excuse to get a nice LiPo / LI-Ion charger like a junsi 3010b for example I like to go with a balance charger rather than a BMS for the extra features they have also the flexability to make beefe packs for other projects.

Hey! sorry for not answering sooner, been so busy with printing parts and a lot of other stuff… Yes it’s normal plywood - at least I think it is. I don’t really know… I moved in about a year ago and the plywood was there when I did… so I think it’s normal but it’s 18mm thick. I was really worried about the stiffness but I really like it. It’s flexible enough for me (105kg) A friend of mine is riding 12mm but he’s only about 80kg so he can afford it

Nice tip about the fibreglass! I want to use this board for cummuting so it’s important that it doesn’t break in the middle of nowhere

Thanks man! That’s exactly what I ended up doing. I had a look on the Junsi 3010b - it’s pretty expensive! I can live with charging two packs until I make a BMS. well - I have to

Okay, time for an update. A lot of pictures of pack building and assembly. Hope you’ll like it! 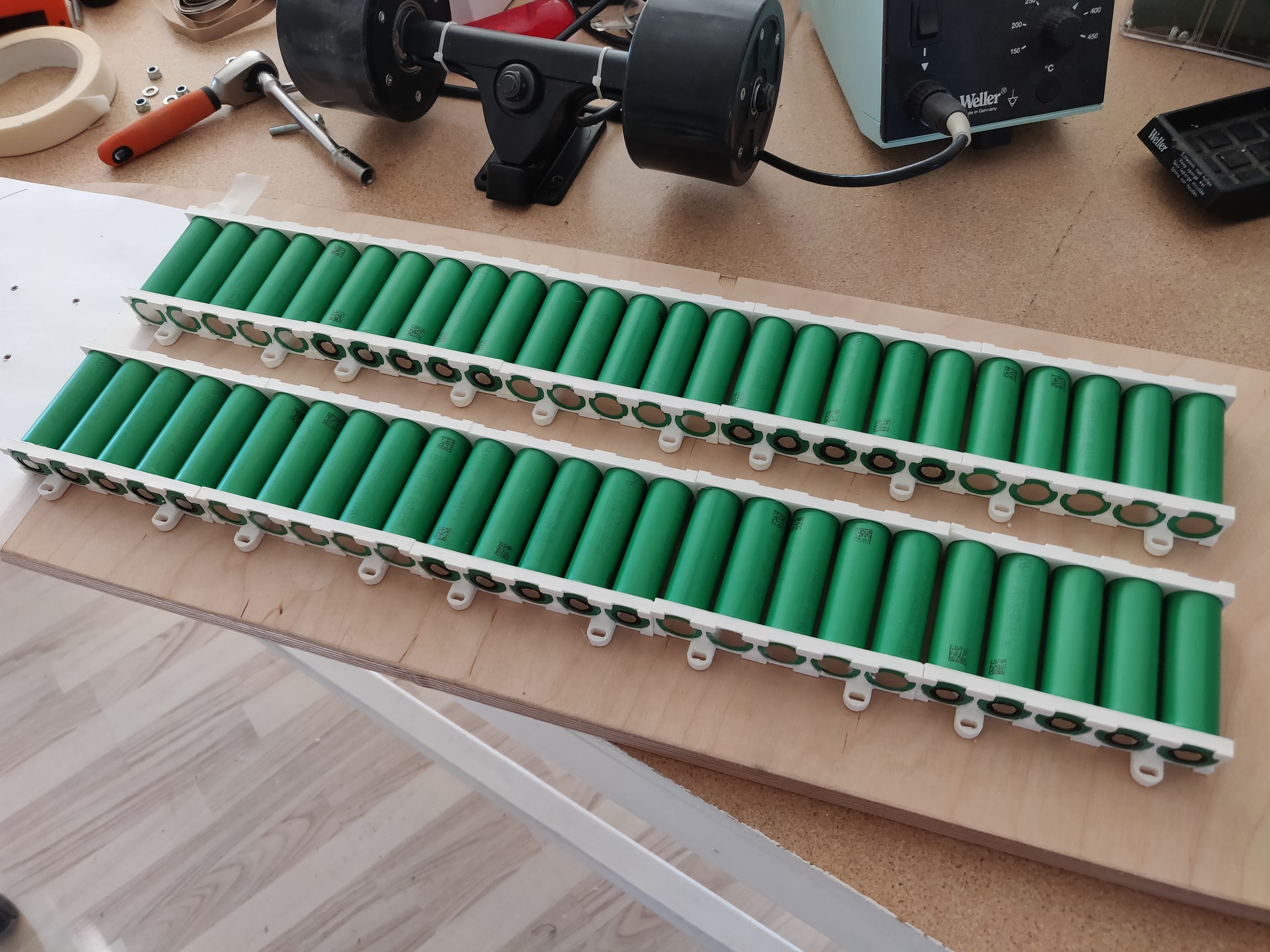 Finished all the printing for cell mounts. Took a few days on/off 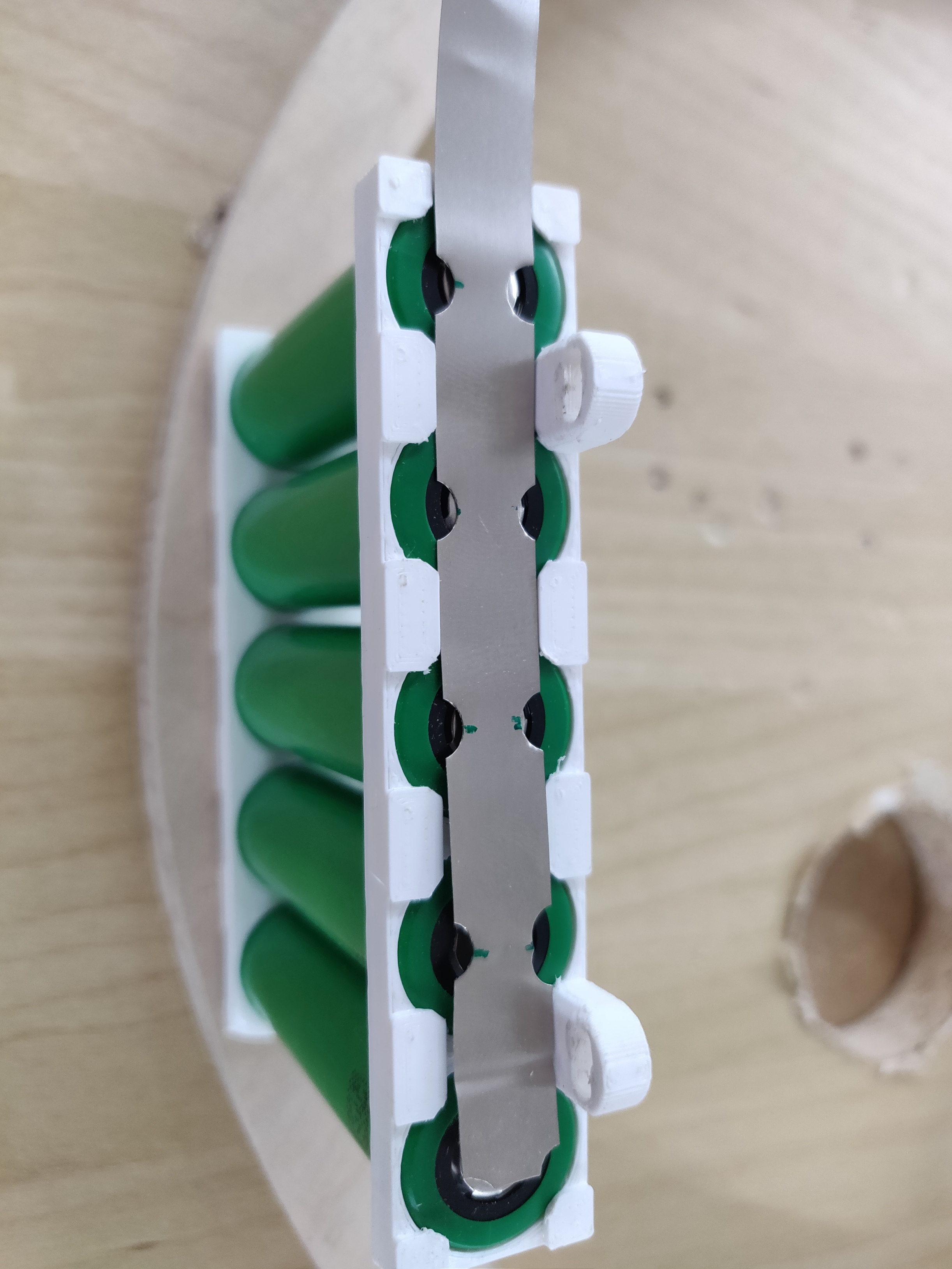 I figured the easiest way to solder (I don’t have access to a spot welder) the nickel strips was to use a hole puncher for each cell. Then I could solder in the half circles. 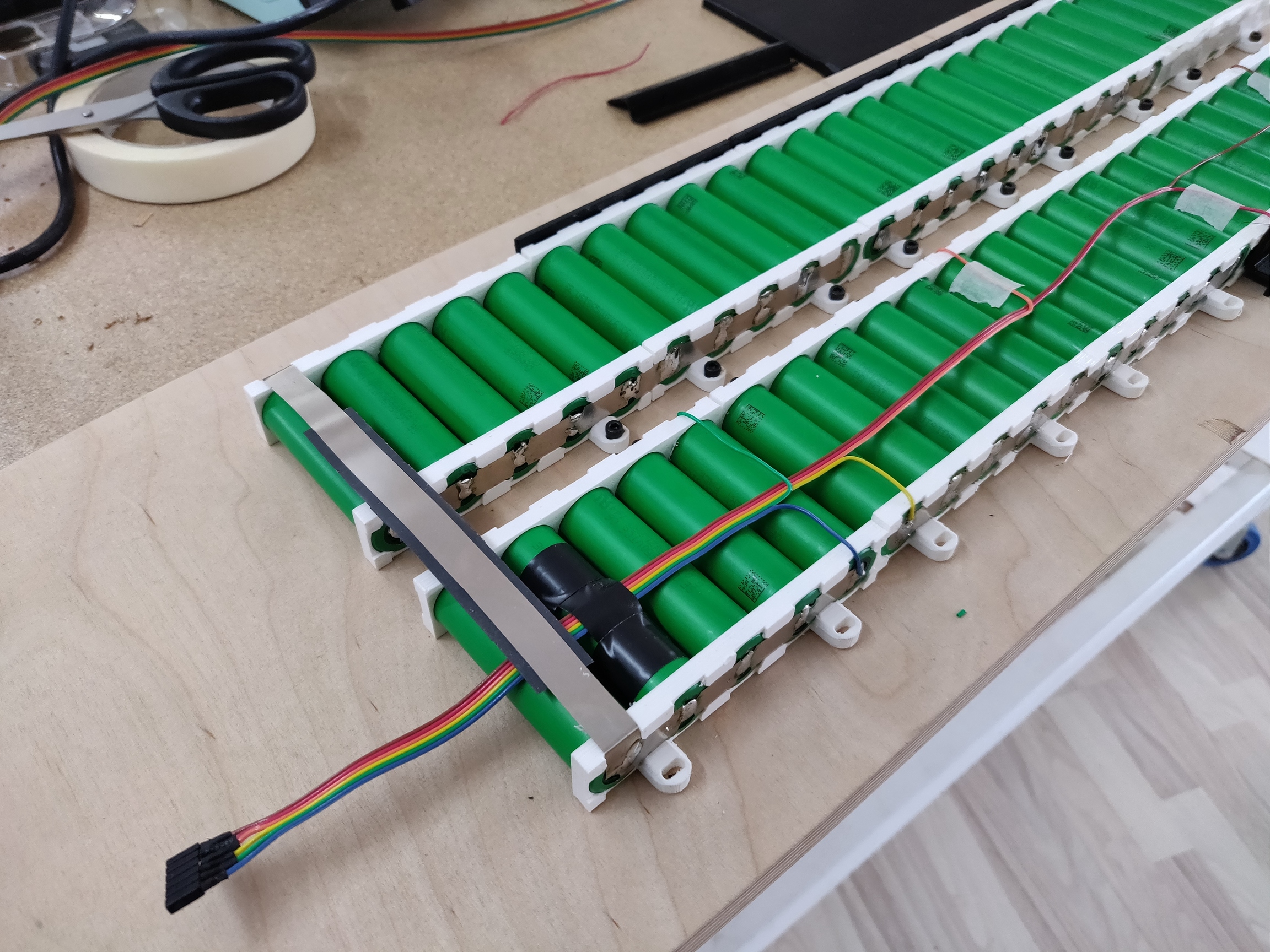 Started working the balancing plug on the first pack. Also I mounted the connection between the positive on pack 1 and the negative on pack 2. Be sure not to short anything now! 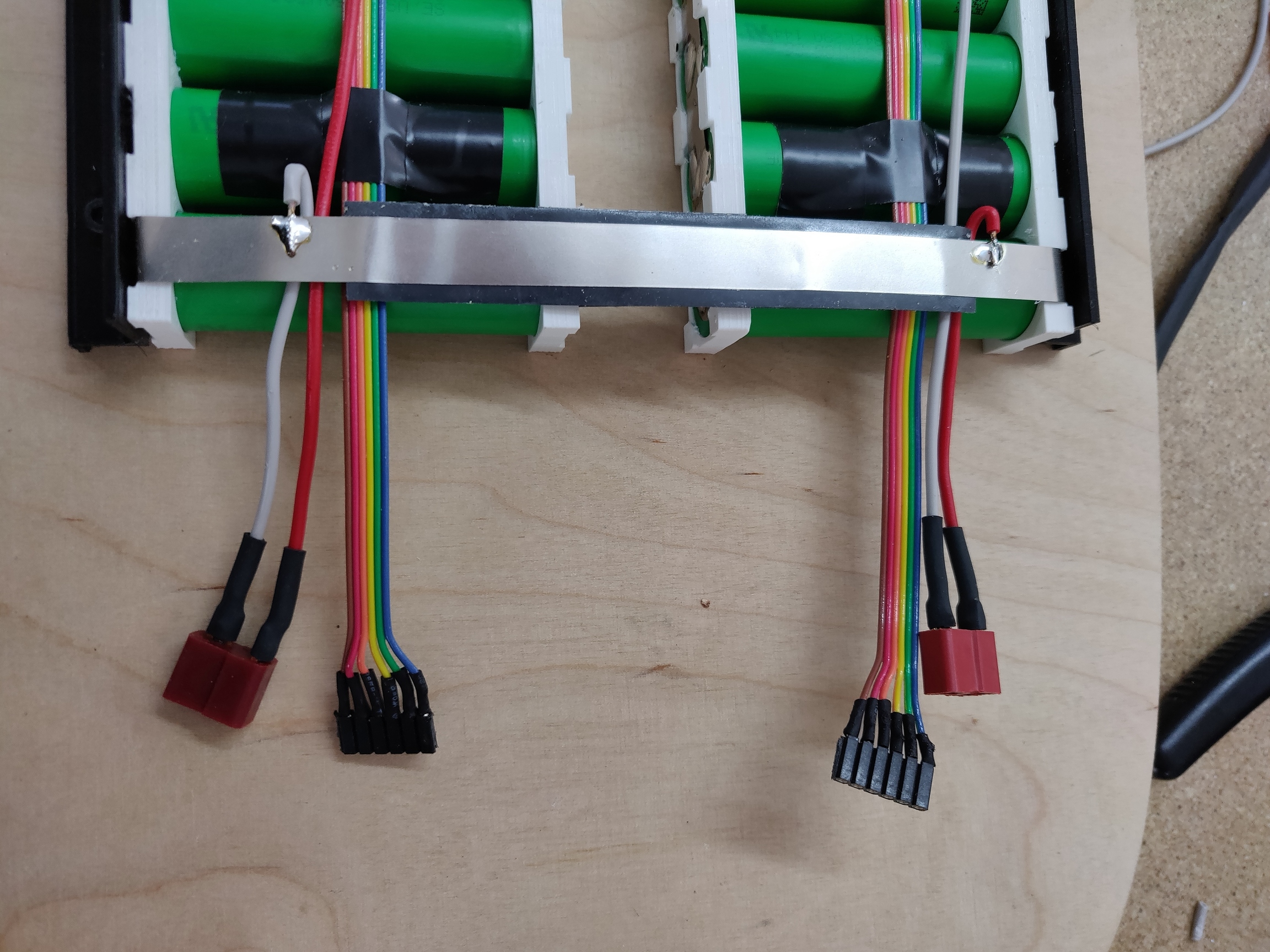 Close-up of the charging port. 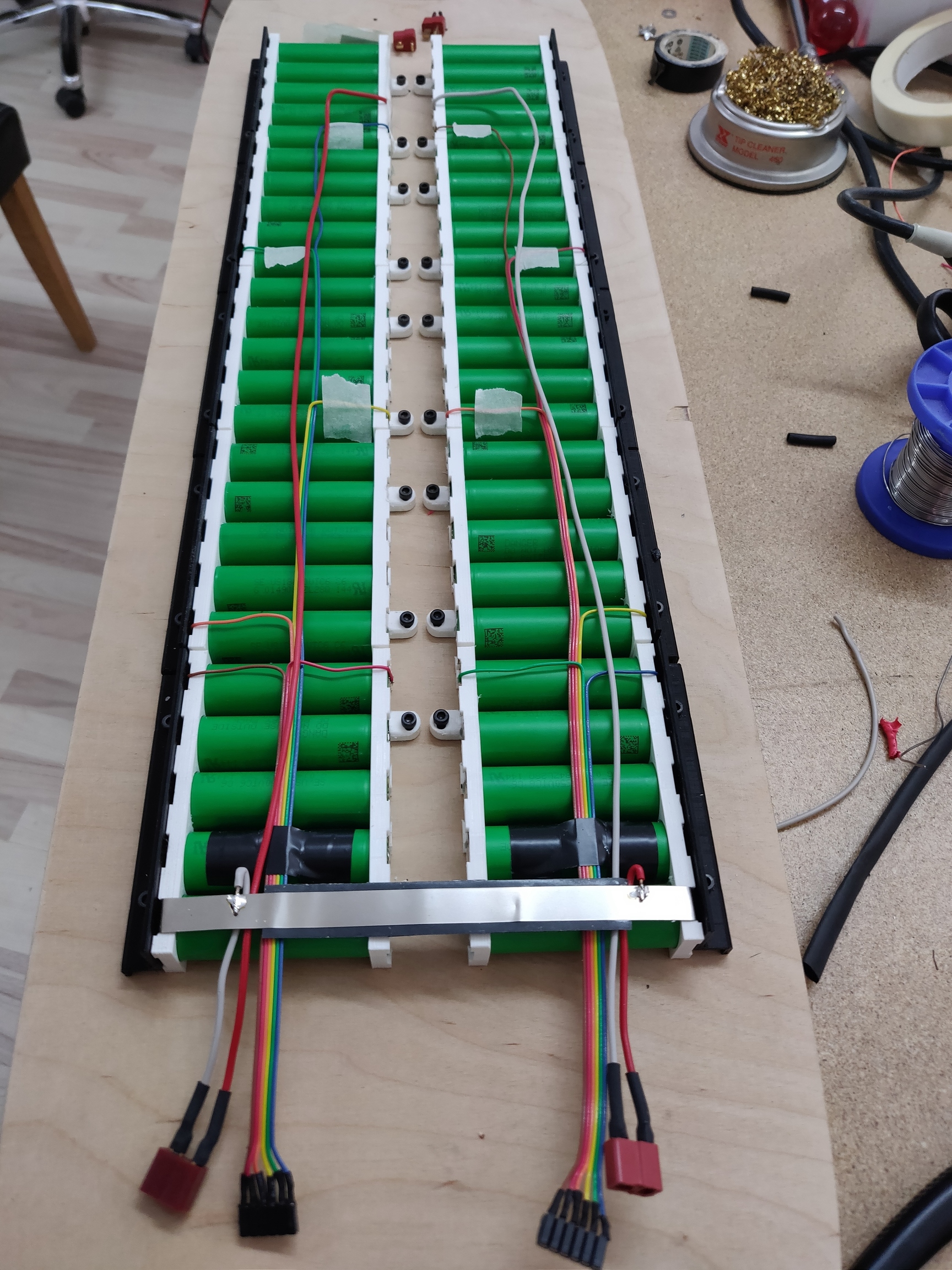 This kinda summarize the pack 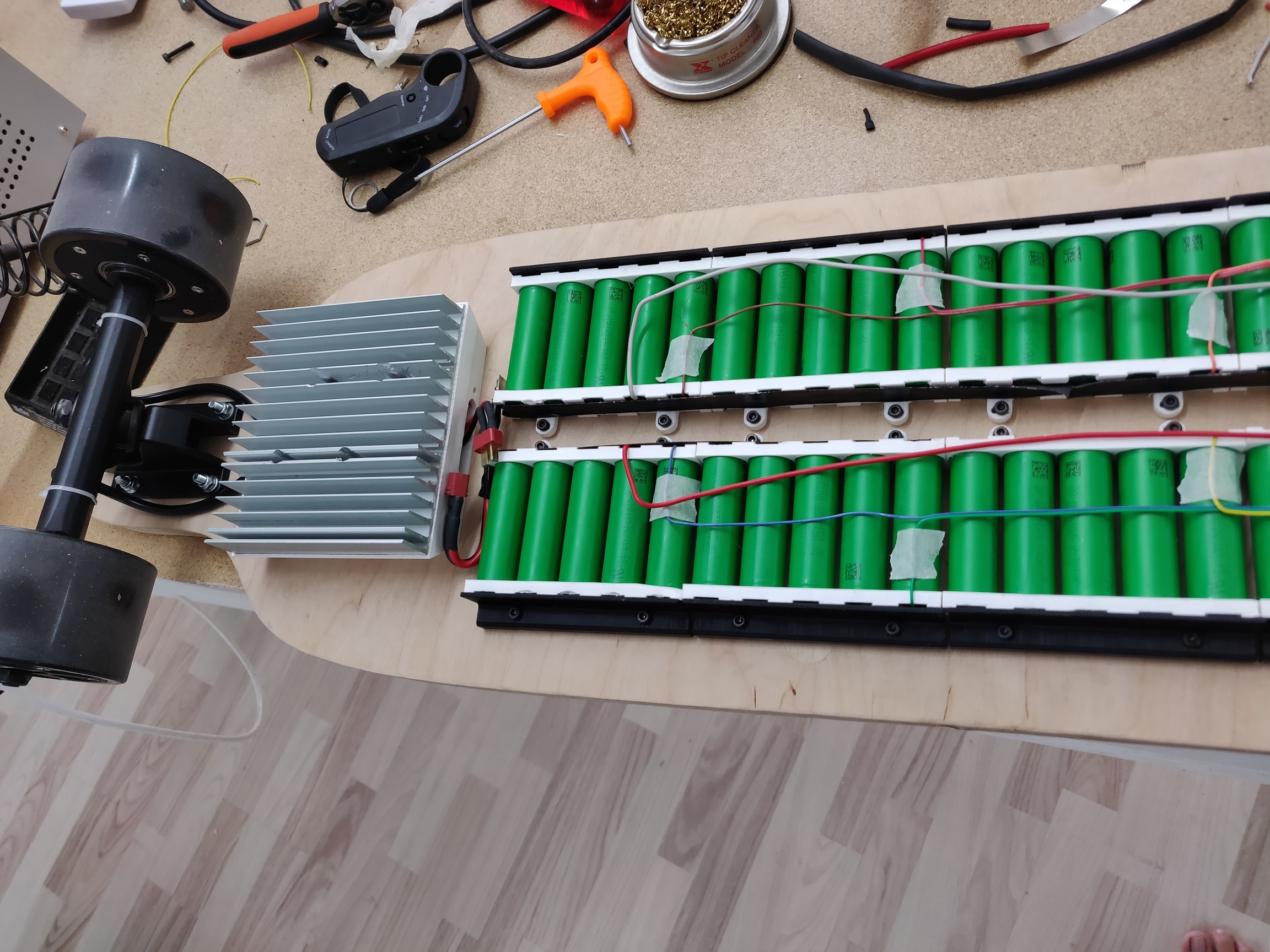 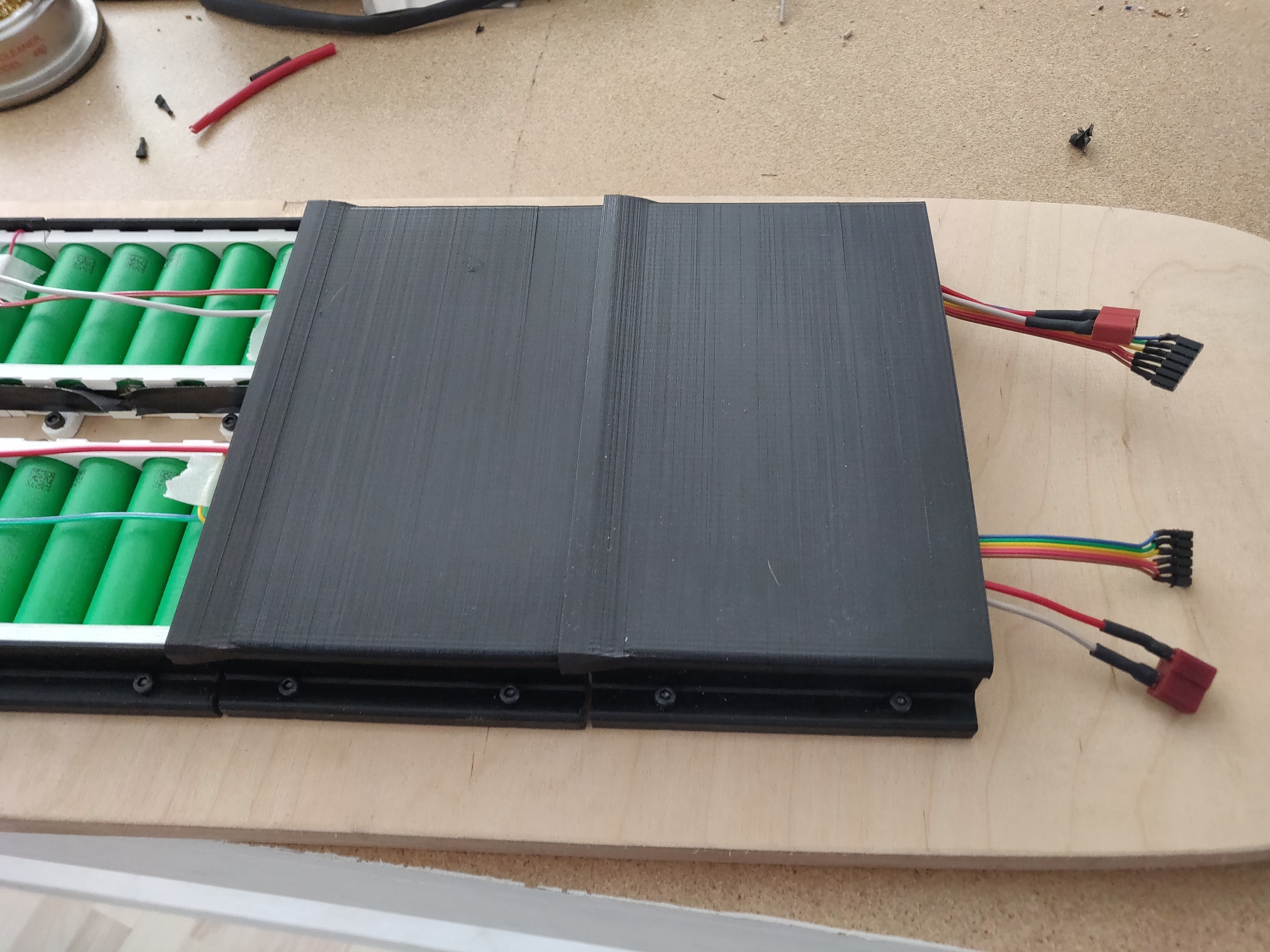 Such a shame to pack all that work behind black plastic. 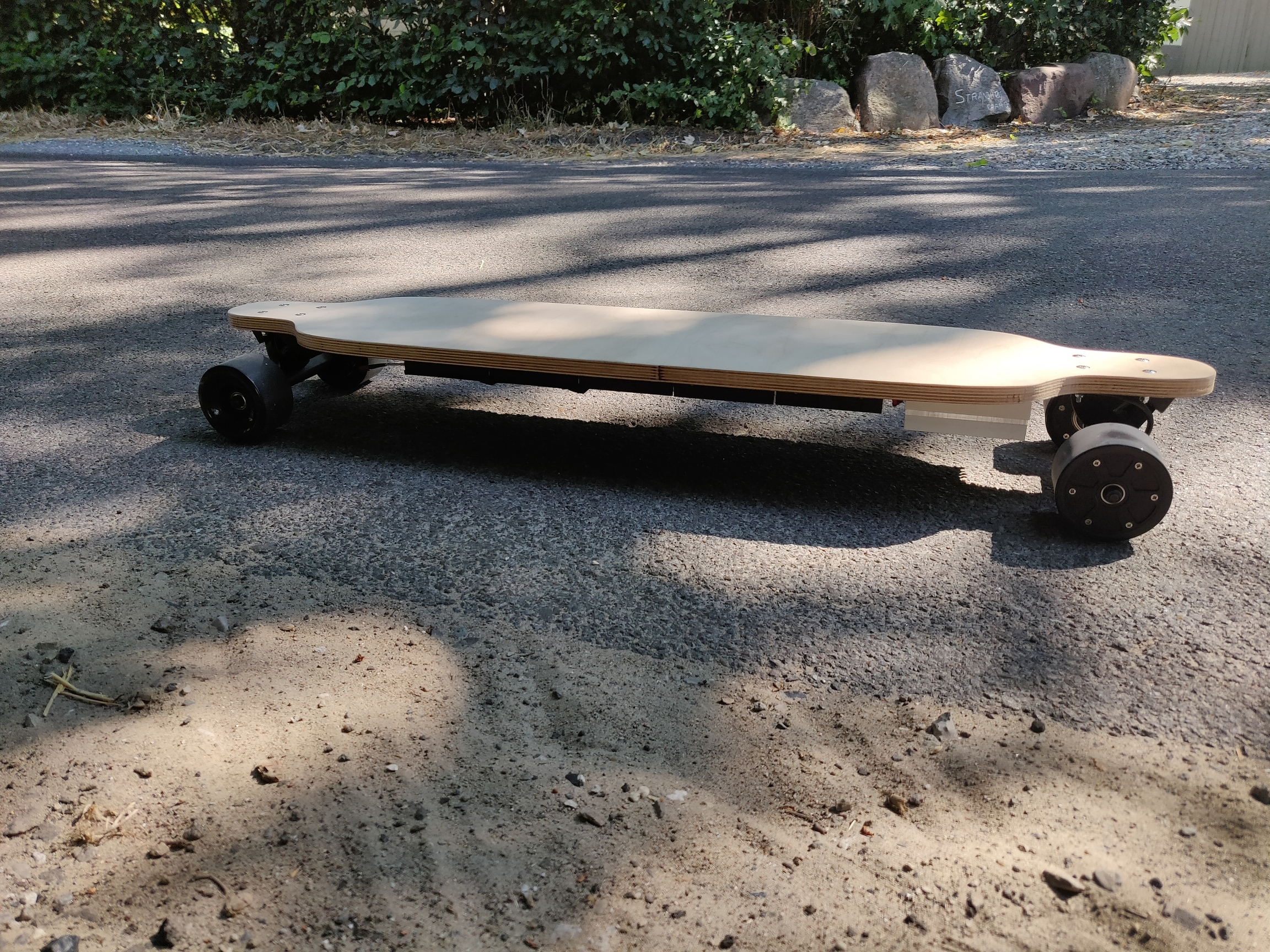 Sooo, looking pretty nice on the road. Now for some testing.

Thanks! I have a thing for machined parts - and hey I had a huge block of heatsink lying in the corner just waiting for this… well, actually it was waiting for an amplifier project but hey…

What was your experience with soldering 18650?

I’m positively surprised! The nickel strip was super easy to solder on but that was more or less expected. I had expected the solder to ball-up on especially the negative side. but I took my biggest soldering iron and it was actually pretty painless. I used a lot of solder but I’m super scared that if I make a bad connection the whole thing will just explode in my face. The positive terminal have 3 thermal-relief pins so that was super easy but I was trying to avoid too much time on the terminals.