I’ve had a ton of emotional turmoil over this build. It’s been almost a year in the making…a lot if single malt dedicated

Had all but given up on it until @okp happened up on some MBS prototype risers, that’s what put this build back on the bench.

The enclosure was a monster, I gave @psychotiller the wong measurements the 1st time (damn I hate to admit that in publicnlic

) so had to get him to make another, he came through like a rock star as always.

It’s not actually up and running yet, I took it for a ride around the warehouse and all was good. Went back to my workbench to loosen the rear truck a little, stood on it and a wheel pulley went off like a gun. It was broke as hell. So I retro-futted some VXR pulleys to the MBS Rock Stars but now I’m waiting on belts…maybe tomorrow.

I did this build as well it worked amazing

. But it was so unstable at high speed. So right now I am working on some upgrades to make it better once I am done I will post some pic…

I remember your build, beautiful. I kinda figured at speed it would be a bit squirrely, I seldom go over 20mph unless Im testing or trying to impress my wife

. My motivation is the spud 29 is a really stable platform, the MBS 8in wheels are frikkin tank wheels & the offset trucks with @okp risers make the whole thing a beast as far as crawling over stuff.

Got my belts, but the wheel pulleys are substantially smaller so the motor pulleys are running into the wheels. Came up with offsets but now I need longer bolts. To the hardware store I go tomorrow, maybe I can ride, get pics and finish up the build log tomorrow…

When I saw the new message in your thread I thought we would get finally the pictures. Seems we have to wait a bit longer…

. I went to Lowe’s, the closest thing they had we’re chrome ohikios head, that’s a quick path to having to drill out bolts. I’m gonna try Home Depot tonight, but I allready orders some bolts from Amazon just in case.

Alrighty…this damned thing is finally on the asphalt. I still have some adjustments to make, a little slippage to resolve and need to change some config parameters. Its definitely rideable now though. With the trucks at 35 degrees I expected it to be less turnable than I like, but I was immediately doing slides in the dirt and carving on sidewalks…its a beast! It’s a little bare bones right now, I’m going to re-adjust the motor mount angle and re insulate the motors. I will likely replace the motors as well, I think this monster would benefit from sensors. I kind of pieced together the motor mounts from a couple of sources, ended up welding the motor clamps after weeks of trying to get them stable.

I’m also thinking about pulling the MBS 8in wheels and replacing them with 6 shooters, if I can find some decent off-road tires to fit. I’m not incredibly impressed with the MBS wheels. They aren’t as grippy in the dirt as I expected and you feel a lot of vibration with these hubs. They are as good as any other mountain board wheels out there, but 6 shooters are premium cush. Not too mention the hell of a time I had getting pulleys fitted. 8-23 3 1/4 hex head bolts are about impossible to source.

I’m not sure yet, but I’m considering replacing the Spud 29 deck with an LHB Phat Matson, what do you think @longhairedboy?

If anyone is interested I’ll post the prices also, but they are not exactly accurate. I actually bought a complete Comp 95 for a steal and used the trucks and wheels from it. But suffice it to say, its fuggin expensive. 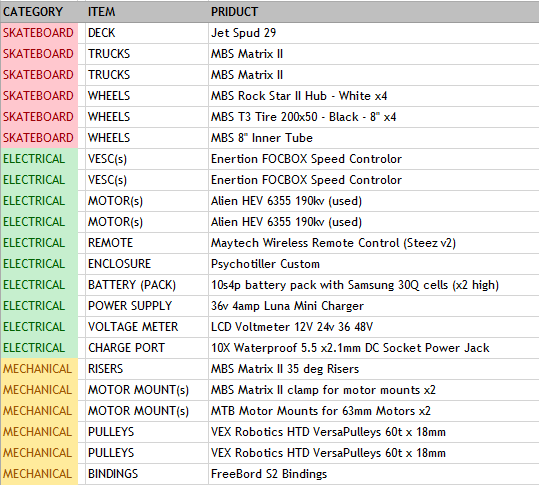 Nice build nice and clean . I am almost done with my upgrade to my build tomorrow I’ll share so pic of it…

Can we see shots of the underside?

This looks like it’d be seriously fun!!! As always dude, sick build.

Thank you sir, I appreciate it. It’s a beast for sure, sensors will help. I’m gonna rely on a throttle curves for now.

I need to get some inside threaded aluminum yo make a cage for the motors too.

Omg more pics please, even better- how about a quick vid? This thing is sick as hell!

Once I get it finished I’ll get more oics and a video or 2.

Here’s a quick one… did you anodize the Freeboard S2 Bindings?

Nice. I wonder if this rides as high as the trampa trucks do with 35 degree risers.

It rides high for sure. I don’t know about Trampas.