Hey so is Trampa now making a dual VESC 6 that can handle higher amount of power? Yeah saw that too wasn’t sure. Must be one of their original patented designs. Guess we’ll see what this will cost

That’s not dual and that’s not trampas

I don’t know how that isn’t dual… It’s got two power in cables on one side and then two sets of the three phase wire cables on the other side. It’s exactly like one of your dual FOCBOX enclosures with the cables, functionality wise, obviously not exactly the same. If it isn’t a dual VESC 6, why does it need two inputs for power?

I don’t really understand what you mean when you say those aren’t Trampas. They’re licensed to manufacture and sell them under the Trampa brand, and it’s printed on the front of the VESC…

Regardless, I’m not trying to debate semantics or split hairs so to speak, I’m just curious about this apparent looking dual VESC 6 which appears to be able to run at a higher power level then others.

Lol, no you’re right I didn’t notice it was three of each, I thought I just saw two power in cables and I guess my mind tricked me into thinking the other side was how it should be… Weird, huh? What the hell are they doing… Haha I guess the three powered VESC is the next innovating in Esk8!

That’s single vesc with higher current I guess 300A which will require at least 3 x XT90 inputs, and 3 x 3 phase wires so it would be bit more flexible compared to 00AWG wire…

That’s single vesc with higher current I guess 300A which will require at least 3 x XT90 inputs, and 3 x 3 phase wires so it would be bit more flexible compared to 00AWG wire…

Yes, it is a single but no way you will get 300A over those wires, so they triple them up.

Probalby a really stupid question. but does this mean its 1 vesc for 2 motors

The innovation was probably caused by competition

Probalby a really stupid question. but does this mean its 1 vesc for 2 motors

Awh that would be really good if it was. what does dual vesc mean then

two VESC in one case

I don’t get this thing. What would you use it for and how?

shouldn’t dual vesc be one controller for 2 motors? like the Chinese ones

Electric Motorcycle or Bike for example, a VESC on those would be really nice. Though personally i’d like to run a higher voltage in this case. If you really want to push 300A the Cables will be huge.

Obviously I’ve never looked at how motors are connected on those but why does it have 6 phase wires? Hi

There are multiple wires per phase. It’s a regular 3 Phase output, just 2 Wires for each individual phase to handle all the current.

Could do 16S on it, very likely for a bike

It is a magnetic flux compensator prototype. At this stage it is driving multiple reving resistors (up to three simultaneously, shown two) on up to 9 phase wires from up to three individual power sources. If you drop those motors into 2L of water, the water temperature reaches 75°C in just under 300 Seconds, hence 75/300. We use it to boil Easter eggs, which are then hidden in the source code, so everyone can enjoy an eggciting Easter weekend browsing through GitHub. 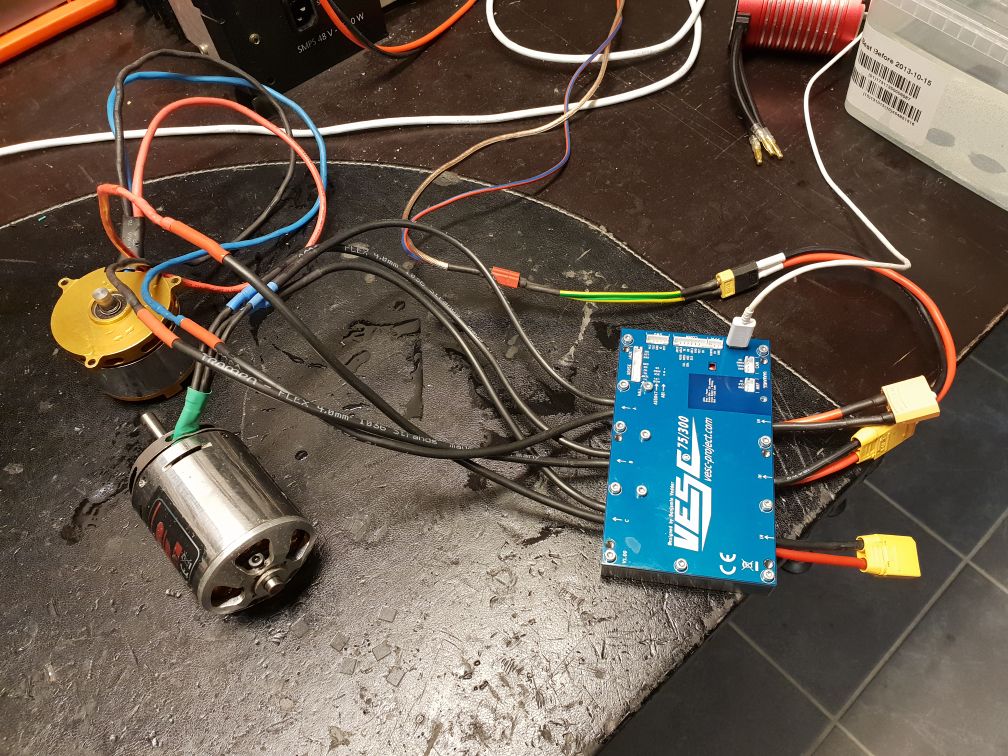 For Skateboards this thing is a bit overkill. We want drop two of those into a 1975 Mini Cooper. We are aiming at 300KM range. Project 75/300. Since we could not get enough batteries into the car, we will drop them onto the car. Has some similarities to our Mountainboards with strapped on Battery Box. Unfortunately we had to strip out the 140 HP 1340CC turbo charged engine and the 5 speed straight cut racing gear box. Hopefully we will find a new cooper chassis for the motor soon. 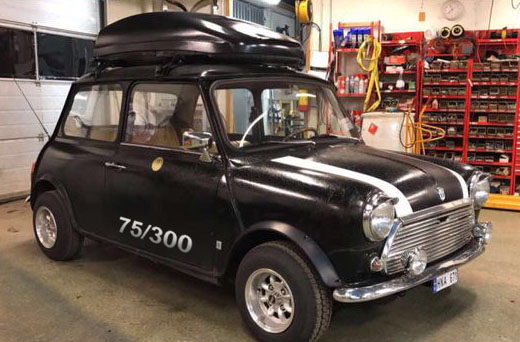