My boosted board v1 bms system took a dump on me. I already took the battery apart and tested and replaced the dead cells but It still gives me the 1 long 3 fast red flashes. So I’m looking to replace it with another bms if anyone has one they’re not using. Or if anyone knows where I can purchase another bms that would be helpful. I’ll take dead packs and disassemble them myself or if you have just the bms itself that would be great. I live in San Jose California if that makes any difference. If its worth anything I want to try and connect one of these bms to 12 headweay 38120 8ah cells to see if it works with them. Thanks in advance. Yes! that is what I’m looking for.

Any thoughts on if a supplimentary board could be wired to the CAN bus to fake communication with the BB ESC? That way letting you run BB batteries on any AM setup…

So i’m trying to figure out the protocol to have an aftermarket BMS connect up to the ESC. I’m talking to best tech about their CAN BMS. I’m currently trying to gather more information about the CAN setup since the factory BMS sends a signal for it to work and another signal the same time to give battery level to the remote. The V1 BMS I received from Tunda(Thanks again! Tunda!) works enough that it allows me to operate the board without the battery level. However it just keeps beeping as if the board is out of battery. It also doesn’t have balance discharge of the twelve cells. I don’t have the hardware to connect the BMS to my computer yet but i’m trying to get one with two of the CAN BMS that Best tech sells. Have you tested with any this stuff yet? I’m slowly going through this since I’m learning as I go.

Hey progression on what information is being sent by the bms, l have a v1 with a broken bms aswell and l have same issue and l trying t ok workout what l can do to retain the same main board. Any new information or discovery of supplyers that would help

Howdy folks, I’ve also gotten interested in CAN Bus sniffing lately. My battery got below the threshold where the BMS would charge it, and rather than follow the recommended guidance to push it around until it would charge, I decided it would be better to tear into it with a claw hammer in a drunken rage. The aftermath was pretty ugly - that battery is NOT user serviceable.

Anyways I built this 3D printed caddy and replaced half the cells, wired it all back up and it’s still not 100%. As soon as you power it up, it starts beeping BUT power is available and the wheels will move for maybe 10 sec, then it starts flashing orange and the power cuts out.

I bought the hardware to perform CAN bus sniffing. It’s pretty cheap, all you really need is a raspberry pi and a little interface card. Then can-utils is your friend. I got to the point where I was pulling data from the bus and will try to post something when I get home around Sep. 23rd. Eventually I would like to get a Arduino mini that just broadcasts out a “HEY EVERYTHING IS FINE” on the can bus, and an XT90 connector so I can use any battery I want. I expect the ESCs will operate OK on a pretty wide range of voltage if you don’t mind taking a top speed hit. 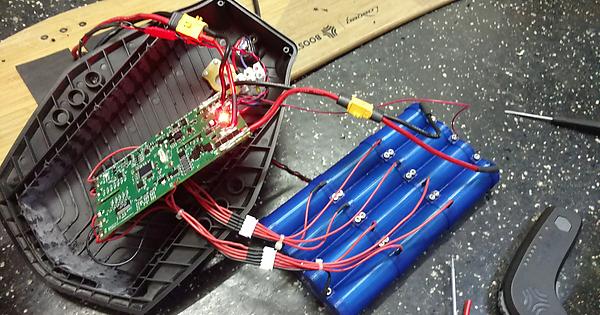 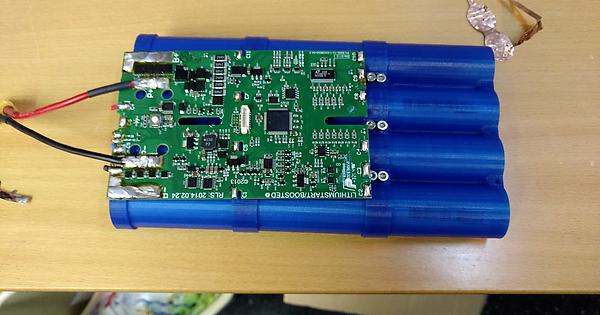 mikegeezy, i have a boosted v1 with similar issue. can you share what that ‘everything is fine’ can bus looks like and how you got your arduino programmed to send it to ESC? i think paying $500 or $600 to boosted people for repair is unreasonable and i would love to use that board few more seasons. i don’t care if i see how much battery is used. i just want ESC to engage and drive. Thanks

Hey, I just recently ordered the CANBUS sniffer gear. Sounds like I went the same route Mikegeezy with the hardware I ordered. However, I’m also trying to fix either of the original BB1 BMS to have a fully working BMS to read. Besttech has a selection of Canbus programmable BMS but I just haven’t gotten deep into this yet to see how it would work out. http://bestechpower.com/communicationbms/ But who knows if it’ll work. Anyone on these forums a CANBUS whisper who could point us in a more educated route? Oddly though with one BMS I can run the board for a while having just the new battery leads connected into the BMS (BMS connected as intended except I didn’t connect the balance wires, still has the annoying beeping for the 15 minutes I rode it) and on the other hand, the other BMS will give me, absolutely no power to the motor but the remote does show connection.

Good stuff. I’m glad to see there’s some interest in this. It seems silly to me that all the V1’s were essentially designed to be bricked once the battery reaches end-of-life. Expect we are not the only ones who are going to face this problem. That’s a sweet find on that CANBUS programmable BMS. I didn’t realize such products existed. That could potentially open up an aftermarket for these batteries.

The more folks we have sniffing the bus and comparing different addresses / values for different situations etc, the better off we’ll be for decoding what’s what. Will post more on how to get the data and whatever I can pull when i get home week after next.

OK Folks, I’ve got some more details and a CANDUMP log file to post. I followed the tutorial here:

CAN On the Raspberry Pi

A walkthrough of connecting a CAN-bus controller to the Raspberry Pi via SPI.

(I think there’s a typo on the ifconfig command to check that it’s connected, I could only get a response using “ifconfig can0” but don’t get hung up on it. Also using 3.3v instead of 5v - not really sure why.)

The baudrate i’m using is 500,000. I could not get the cansniffer command to work, or display any real data.

So I’m just posting a candump below, and a couple of youtube videos 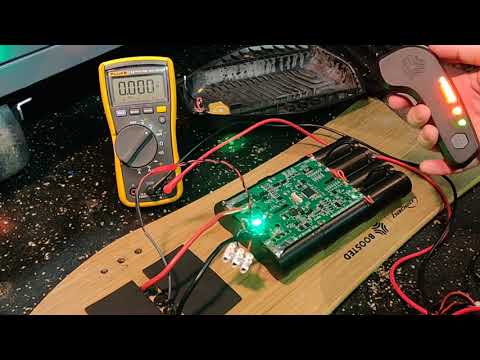 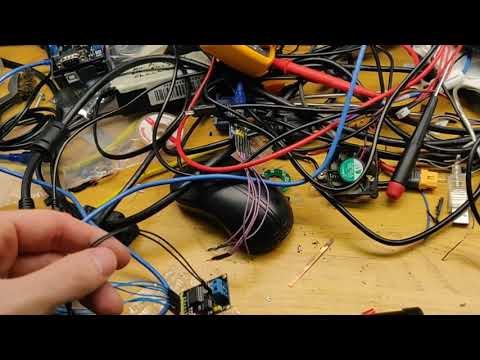 does it have to be a boosted one?

also i got the same multimeter as you

Yeah I would love to be able to swap the battery pack out for anything other than boosted. The problem is that the BMS communicates with the ESC’s over that CANBUS link. So if the BMS isn’t powered on and sending a “MOM I’M FINE” signal - the ESC’s won’t budge.

yeah Fluke makes nice stuff huh? I really want their network cable tester, but kinda breaking the bank at like $400.

I was wondering did any of you guys manage to get to the bottom of this and figure out how this BMS works and is it possible to replace the battery pack with an identical one?

I recently bought a BB-V1 and the battery pack still works for now but does not hold charge for as long as it should. I have managed to find a company that is capable of building and replacing the existing pack with an identical one but not sure if I should I proceed with it as I don’t want to run the risk of bricking it.

Also the CANDUMP log file is it worth giving it to someone on Fiverr to figure it out?

Any advice or help would be greatly appreciated.

I haven’t made much progress yet. I think that I physically damaged my BMS PCB when I disassembled the battery housing, because if I leave all of the cells hooked up eventually it will drain one or two cells down all the way killing them. So I don’t hold a lot of hope that I can sniff healthy CAN signals from that BMS anymore.

I noticed that the V2 boards which have the removable battery have two wires for battery voltage and it looks like two wires for CAN signals. I’d like to reach out to Boosted tech support and see if the CAN protocol is the same from V1 to V2, in which case maybe those batteries could be made to work with the right connector.

I wouldn’t mind chipping in to crowd fund someone who has some expertise with CAN bus hacking. But expect they are going to need some actual hardware and not just log files.

Another alternative would be to ask Boosted to release at least a portion of the protocol but I’m doubtful they would agree to that.

I think Boosted will replace the battery for you if that’s the route you want to go. What did the third-party you found quote?

So I have changed the batteries before with a damaged BMS. The BMS from Tunda was unfortunately damaged and I haven’t been able to get a fully functioning BMS off of a V1. The BMS from Tunda is damaged for the 11th balancing connection, the controller works and you can get the board to move but without that balancing wire it wont read the battery level so it’ll continue beeping as if the battery is very low. I have tried it with the 38120 8 amp headway batteries as well as the V2 boosted board battery. So the V2 A123 battery pack has the same dimensions and balance lead locations as the V1 battery pack. If you can take the case apart without damaging the BMS on the V1 you can de-solder and re-solder the both BMS and move the V1 BMS onto the V2 A123 pack. The main leads are different from the V1 to the V2 but the V2 battery leads are smaller and can be soldered on to the V1 BMS.

I’ll double check tonight but I believe the V2 battery pack actually has 3 smaller wires in their connector, I think the can-bus is different version.

I was looking in to the different can-bus protocols available on the available BMS through tech but I just haven’t had time to do more since the BMS doesn’t work properly(nothing to base off of). And this is interesting but Bestech BMS actually uses the same programming wire but I haven’t gotten that yet either since I’m low on cash at the moment due to going back to school for a career change. We need to find someone who is well versed in can-bus. If not I assume that we’re pioneering into something very complicated and could be a waste of money, which I have done quite a bit just to find out that headway 38120 and v2 cells work with the v1 bms. However considering I now have 12 headway lifepo4 and v2 battery cells that need BMS I’ll probably contact bestech about 2 different can-bus BMS setups and connecting wire as test subjects and just to be able to use the cells when I have money again.

I already tried to put the v2 battery into the V1 ESC with no sucess because there is three wires instead of two.