I was browsing through Facebook on my phone the other evening when i saw this in my news feed. 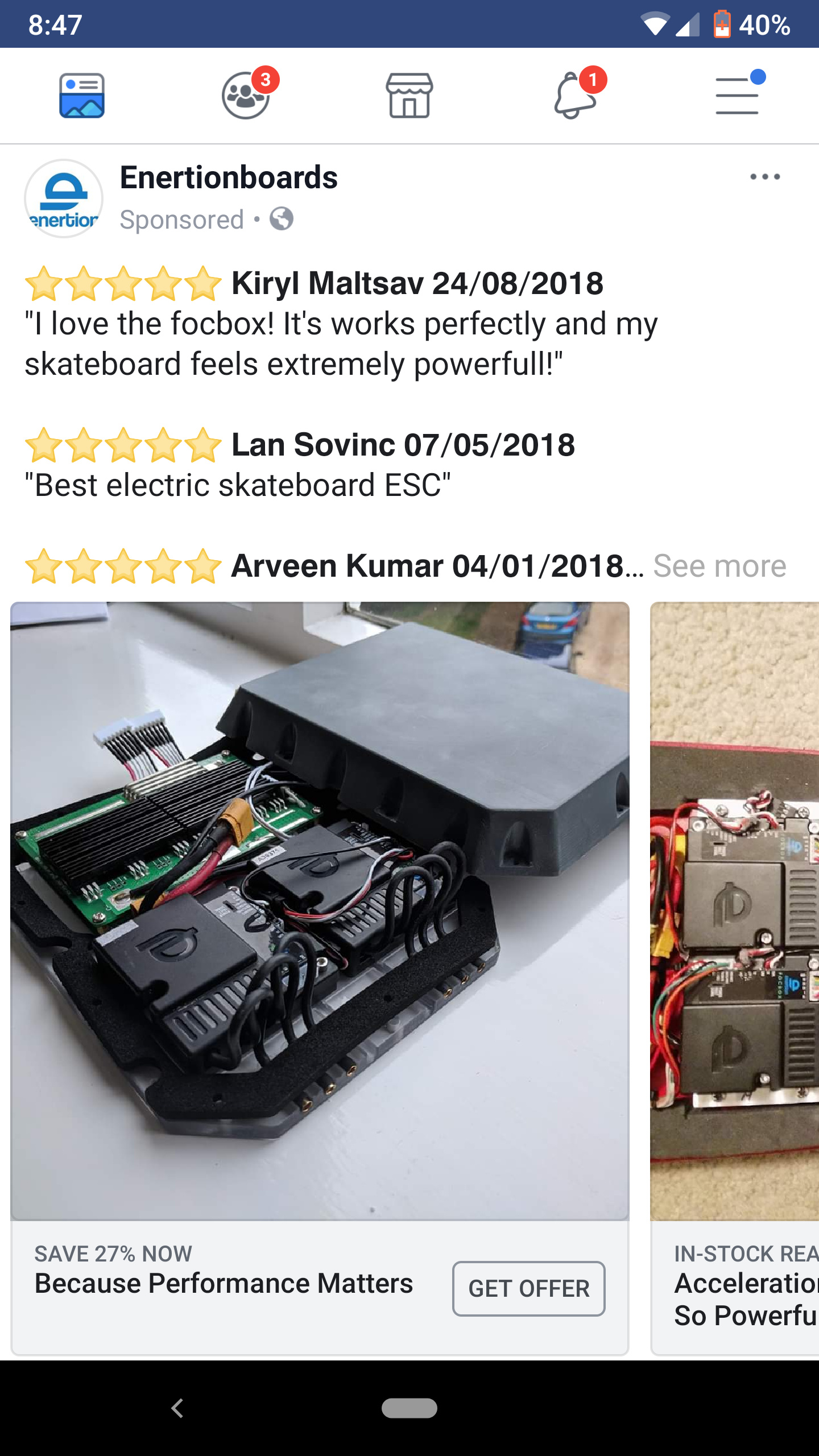 Its an advert for FOCBOX by Enertion. Nothing unusual about that, I see these often. The thing that caught my eye is that the enclosure in the picture looked oddly familiar, its mine.

So i started wondering how one of my images was appearing alongside an Enertion advert. Initially i thought that i might have uploaded this image to facebook and that some clever AI smarts had recognised the FOCBOX’s and linked this to the ad. After some investigation I realised that I have never uploaded this image Facebook(or Instagram) and that it has only been posted to my build thread on this forum. (https://www.electric-skateboard.builders/t/big-torque-reliable-board-for-the-larger-rider-trampa-street-dual-6374-focbox-custom-battery-enclosure/43075/57?u=ducktaperules)

Then I realised that it might not be just me and that the other “diy” images that im seeing are probably being used without the consent of their builders.

So this leads me to 2 possible conclusions: 1 - Facebook is taking photos off my phone, tagging them and using them in targeted advertising (somewhat unlikely). 2 - Enertion is taking pictures from this site and uploading them to facebook to use as advertising without asking or even notifying the original creators.

Anyone know whats going on here?

2 - Enertion is taking pictures from this site and uploading them to facebook to use as advertising without asking or even notifying the original creators.

read the fine print of the website TOS maybe…

This site exists purely for enertion’s use for SEO and marketing. That’s the reason @onloop won’t let the community pay for it. It’s a fair trade – we get this, they get that.

“Post Only Your Own Stuff. You may not post anything digital that belongs to someone else without permission.”

I guess they only follow their own rules when it suits them.

They stole the firmware for the FOCBOX from Benjamin Vedder, so it’s not surprising.

edit: they released it now

upon inspecting the TOS it doesn’t seem like they ever bothered to fill this in.

I think this means no one actually has the rights to use these images without consent of the owner.

This is a serious oversight, no way that TOS is legally binding in its current form

Thats me and a picture that someone cheekily edited that Flipsky used.

I mean, they definitely should’ve asked, but how much of an issue really is it?

Well you said this was not a picture that you took yourself, but its your enclosure right? Enertion never did an advert for “your product” even if using the image, once you sell a product people don’t need your permission to photograph it. Someone could have taken a picture with focboxes and your enclosure to show off their build and enertion may have just liked the image is my thoughts. That said, I’d take pride that people are showing off your stuff!

its just a bit of a kick in the teeth when they have messed me about with things before then i notice that they are using my build as advertising.

This is an image i took and only ever posted here of a custom enclosure that only i have.

I suppose you could ask them to take it down then.

No reason why they wouldn’t unless to be a titty.

I would take it with a grain of salt and consider that people might actually see the ad and then bother them about where to get that enclosure, could be free advertising for you

They have not responded to my comment. My problem is I look fat AF in that picture. Come on man!

Hey, you’ve got to build your eskate modeling portfolio somehow… 🤷

I had some Popocas on my Boosted Board back before I had a real ride and @chaka reached out and asked if he could use the image. He even sent me some cool stuff.

Did he need to? No. But it was a damn classy move, and it meant a lot to me.

And how would you know they had done this?

@Sender i agree. it wouldn’t cost them much time just to ask and im sure most people would be flattered that they wanted to use an image. Something like A few % discount code might go a long way in good will.

If this was ok to do, photography as a profession wouldn’t exist at all…its theft, period…