Hey there! I usually go by “Rex” Long time stalker of the E-board community since way back in 2015 lol.

I was 17 when I made my first longboard build, and made an instructables to go with it! (https://www.instructables.com/id/DIY-Electric-Longboard/)

Needless to say, times have changed and my budget has really increased.

I started by finishing a second board (Dual 230kv, 12S belt drive w/ dual VESCs, TB Samsung battery, and an LED underglow that is controllable via my phone, all on 97mm wheels). It has been a blast, and a HUGE HUGEEEEE upgrade from my original board in every single aspect (I have yet to be able to charge my phone off it :/)

With two longboard builds done, I am interested in dipping my feet into the world of Mountainboards. I can zip through grass well enough on my longboards, but curb jumps and other simply fun looking tricks one can only do when strapped to a board look like fun, and I want IN!!

My objective is a more versatile curb/terrain friendly board, that that can be used both on and off road. Something on the ‘lighter weight’ as far as mountain boards go. Hard dirt, dead grassy fields littered with cow poo and gopher holes, skate parks, irrigated almond fields, and pavement will be the types of terrain I will be tackling. Not much mud expected, and no snow here! 25mph on flat ground is a must. Should be somewhat maneuverable/manageable.

Having followed the longboard side of things for a while, I find myself severely lacking in the knowledge of mountain boards. If you knowledgeable builders could point me in the right direction I would be much obliged!

As of now, here is what I know so far:

I have multiple 16000mah 4s 12c batteries laying around that I feel ought to be used. 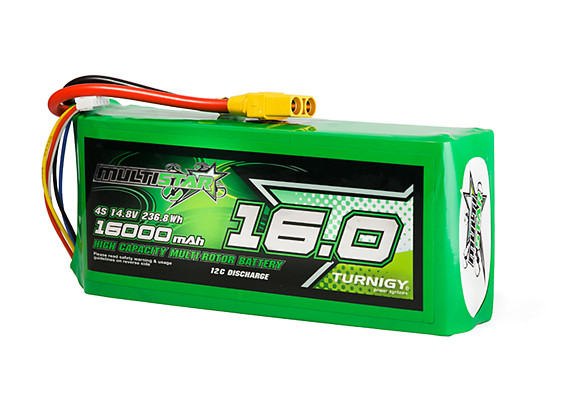 For power, I would like to build my own under-deck battery using these cells. I would build it in a way so that each cell (Possibly two stacked on top of eachother) would run perpendicular to the deck to allow for flex. Each group of two cells would be protected by a 1/16" thick aluminum sheet should anything strike or grate against them from below

Assuming I have about 24 inches of usable under-board length, I could have 7 perpendicular 3 inch wide ‘spaces’ to use. 6 of those would be for the groups of cells, and the last one would house a BMS. @ 2 cells deep, it would add up to be a 12s 16000mAh battery, only an inch thick, and flexible.

The VESC’s would be housed in a box above/behind the dual motors w/ an LCD screen and on/off switch.

Also needed is SOME SORT of LED underlighting. That is a must. I’ve done it twice before, and will do it a third time!! I can wire those in with a BEC easy. Also a headlight for sure.

Anyway, I have very little detailed knowledge of electrical wiring in terms of building a battery with a BMS, as well as on/off switches and LCD screens lol (More forum hopping will likely help that)

Should I go continue with two 6380 170kv motors with the VESC? I don’t seem to see a lot of mountainboard builds with the TB VESC used… Is this because of the amps wanted/needed?

First of all welcome. Now about your build, if you intend on using it as a proper mountain board there are a few things I would change.

@dareno Too slow. I beat you, you old geezer.

@dareno Too slow. I beat you, you old geezer

Thank you! It feels great to finally be IN the forum as opposed to watching

I am not opposed to a top mounted battery. It would simplify things and give added peace of mind

Mostly grass and duft. not a lot of pebbles or rocks, although I have done quite a bit of packed gravel roads with my E-board, and have yet to experience belt difficulties as a result of gravel.

@taz already pointed out the most important things. Top mount battery is a must, chain over belt or even better gear drive if you can. If you want something on the light side I also wouldn’t go with that big battery packs. 5-8Ah graphens should do a good job and save a lot of weight. If you need more range, take spare packs in your backpack and swap them out. I don’t have personal experience with multistar packs but I read that they not really made for high drain applications. As you already have them you will know better than me if they good for your purpose or not. I wouldn’t go with the tb vesc, or as min use a heat sink box for them. If you run them with 35a battery max than you can also use smaller motors as you will not gather more power over a 6355 or 6374.

It’s not only the rocks which can hit your enclosure. I‘m about 170 and bottom out my 16ply trampa when jumping. I know you don’t like to hear it

but I would use a under deck mount really only on the carver or if you plan to cruise with the board. As soon as you want to have serious off-road or jumping plans it’s a big no go. Yes it looks better, but if you short out your lipos because you hit them on the ground multiple times it’s not really good looking anymore

I got 4 of those 16000 batteries off a friend who tinkered with RC stuff for cheap. Have been hoping to find a good use for them, but I guess they serve as good paperweights for now. No they are not meant for high drain. But their low C rating is somewhat offeset by their high capacity. You are right though, they ARE heavy! I’ll go the smaller zippy/Graphen route then. I always forget about the “Use a backpack” trick. Honestly I never board without a backpack. I ALWAYS have a small tool set/spare belts/light/charger. Just in case :]

Be cautious about overheating VESCs. Got it.

If I didn’t want to hear negatives/other opinions, I would not have posted!

I’ll shoot for 17ply with a top mounted battery and motor mounted VESCs (Or the like) I do indeed dislike the idea of a big box looking thing between my legs. I don’t know how long the space between the foot straps is. I’d guestimate a little over a foot. Perhaps I could fit 4 3S batteries side-by-side between my feet for a long/low(er) profile flexible battery housing on top.

Could I bug you to take a quick peek at the length of that space?

I can’t tell you in foot

About the battery box. You could go with a pelican case, but it’s big and you need to like how it looks

There is also the trampa mega box I think it’s called. @taz is using this one and can surely tell you if it’s a good one or not. If you have access to a 3D Printer you could also print your own boxes like I did for example.

So, time to move on… After my setback and a long vacation I finally have some parts together to start my winter project. The plan is to build a 4W chain drive MBT, which can handle all weather conditions during the Russian winter. Unfortunately my...

That is alright. Imperial units are dumb anyway. I don’t know who thought that something other then the Metric system would be a good idea. I wish the US ran Metric as a standard of measuring. It makes so much more sense. Just like 24 hour time.

Perfect. With each battery side by side, I would only need a space 28x17cm, which would leave it at a height of about 2.5cm.

Honestly its not only the look, but alsot the idea of the board feeling more topheavy with a tall box. I like the weight spread out, and the slim look is great as well

I have some aluminum I can cut out and use as for building a flexible housing.

Yes! I saw your build earlier today. It looks amazing, especially with the LEDs. I am always biased towards LEDs.

Unfortunately I do not have access to a 3D printer. I should really invest in one of those, and soon. I either need to hand craft or buy enclosures, which can be a bit of a pain as neither may easily yield the exact results I want. The closer the better though!

Thank you! I have gotten answers in the last hour, that I did not find in the past few days of looking at Mountainboard Builds!

The trampa monster box is exactly what its name suggests. A monster.

It has a lot of space, I fit a 12S7P battery in there and could fit a 12S9P if I wanted to. I like the fact that it is mounted with 3 bushings on the middle of the deck. This allows the deck to flex as designed and in combination with the electric trampa deck makes for very clean cable routing.

Oh wow. That IS a MONSTER box! Though a little big for me. I’ll steal that LCD screen though haha.

Perhaps I should use the v6.41 VESCs…

Welcome bud! A few things I’ll say, I suggest top mount enclosure. I was riding my hybrid mtb on gravel, grass, dirt, etc but am now going full emtb because I got stuck in the woods on some jumps and such. You’re on the right path.

If you’re considering a 3d printer, get the ender 3. 8.5 x 8.5 x 9" tall print bed can prototype enclosures and its phenomenal quality for the price. Lots of easy upgrades to eventually do too. Only $180 if you can find it at a good deal. Good luck to you man.

Check out diy junction boxes online as well. Decent platform to trick out for a top enclosure.

As I said, lots of space. 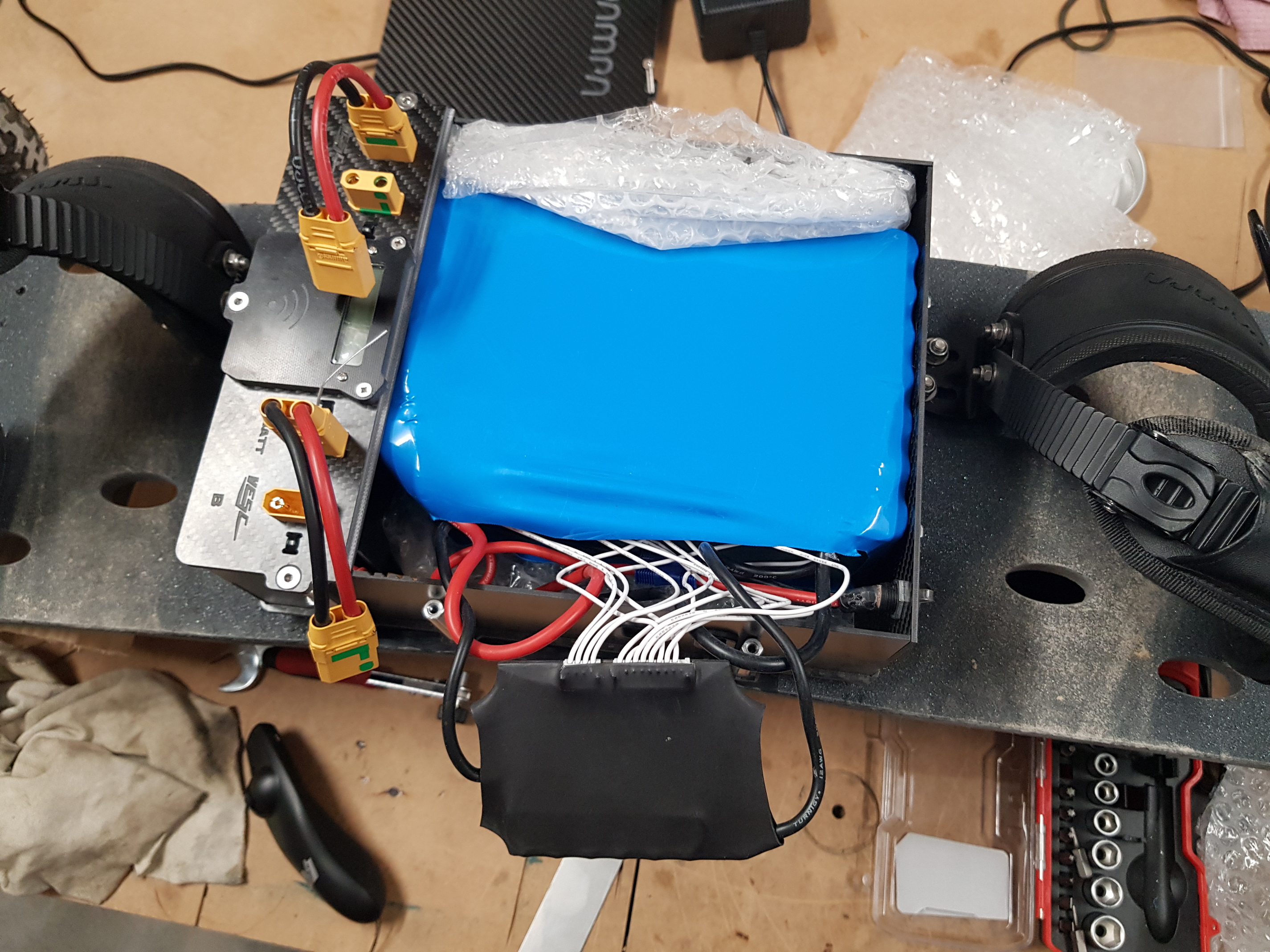 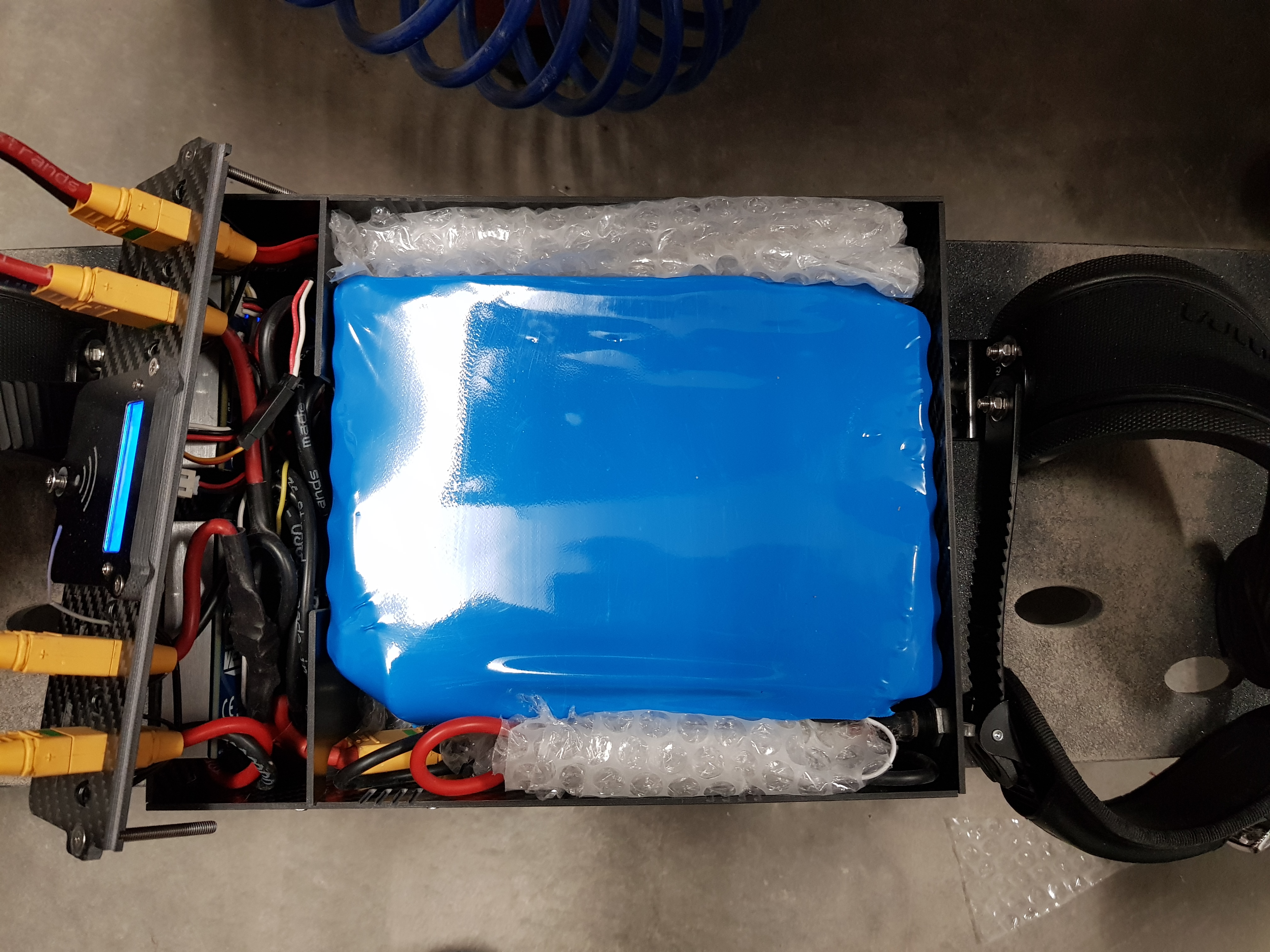 Its definitely settled. A (slim light) top mounted battery box! I’ll skip out on the bms for now and charge the individual batteries as needed.

Wow, 3D printer advice too! Ill deff poke around in that regard. It would be so helpful, especially for mounts, enclosures, and wheel pullies. And countless other things in general life and other builds.

Then I should be set for now!

Definitely with a vesc4 based I would only consider a focbox Better to go with a vesc 6 or vesc 6 based esc or focbox unity.

Looks like I’ll be be pre-ordering the Enertion FOXBOX https://www.enertionboards.com/focbox-speed-controller/focbox-unity-dual-motor-foc-controller-esc

Nervous about doing something other then a VESC, but I will take the 1 year warranty gladly

And that is bad business for my card lol

other then a VESC

The unity is a vesc based controlled. They just cant write VESC in the name because its trademarked by trampa. You’ll have all the futures that any other vesc have, + even more.

Just downloaded the tool for programming the Focbox off Enertion, and its the BLDC tool I used to use for the older VESC lol.

I have just ordered the Trampa board and FOCBOX. Now I just need to settle details with Idea, and figure out batteries!

You need to download the tool for the Unity