Speed wobble is real, and terrible. I experienced it for the first time a few weeks ago. I was enjoying a ride on my new build, casually coasting around and carving at about 12 MPH. I was in an empty parking lot and thought to myself “let’s see how she handles at a higher speed.” Three seconds later I’m in a heap on the ground, scuffed, scratched, and thankfully not seriously injured, but I could have been!

I experienced speed wobble, shown in the image below from this page 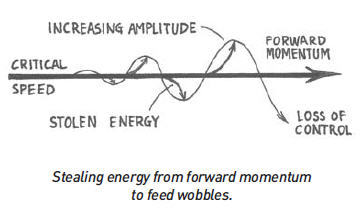 In my case, I had left my trucks on the loose side so that I could turn easily; too loose for the crazy acceleration my build is capable of. The board piked underneath me, this video demonstrates the phenomena well.

@onloop shared this post a while back about a dampened truck, which seems perfect for esk8. We’re in a weird category where sometimes we want to ride in highly trafficked areas and need to turn “on a dime,” but then other times we need the stability of a rigid truck\bushing config to stay stable at high speeds and faster-than-typical-for-skateboarding acceleration.

After lots of reading, I’m not convinced that it is purely rider ability that causes it in our application; the acceleration we achieve is faster than what downhill riders experience, so the “warnings” of speed wobble aren’t as evident, and come too late in my experience. A system that identifies high acceleration and automatically stiffens the bushings would be an ideal solution.

Until then, how do you all minimize speed wobble? I’ve got a completely new bushing setup now, but I don’t think it totally solved the problem.

With my adjustable g-bomb brackets I can run my back truck at 15 degrees and my front at 60, which helps a great deal for speed wobbles. Ran both at 60 degrees once and went down a hill and even with experience stabilizing the board with my feet I was put into a nasty wobble and had to jump off. Same hill same bushings and my back truck set at 15 degrees, no problems. These days I run a slightly stiffer bushing in the front as well to help when I’m really sailing.

Double barrel bushings help or those bigger ones venom makes (dh eliminators). Cones are speed wobble hell imo. If i want a better turn i still run barrels but add a softer bushing street side of the truck. Works for me on hills but i have no experience on eboard. bushings are cheap. You should try a bunch of different shapes and hardness.

I agree. Cones are slalom heaven and downhill hell. The best way to limit the threat is to run 10 to 15 degrees less angle on your rear truck. (either by means of different base plate or wedge). To eliminate speed wobble you could run a 0 degree truck on the rear. It would lean so the front truck could do it’s thing, but the rear truck wouldn’t turn. And you will have a high speed board that turns on a dime only when going 60mph. Remaining calm in the event of a wobble will help tons too! If you can weight one side of the board for a second or two usually you can kill the wobble.

Keeping your battery pack closer to the rear of the deck makes this easier, but you’ll use more wire running the phase leads from the front past the battery and out to the motors, since you will have to put the ESC up front because its lighter. This isn’t something I’ve done yet, but for my next build I think i’m going to try it.

I can spin my 18 pound 40" YOFACE around a hard right at a decent speed. Hard lefts too, although my back faces the turn going that direction which makes me feel like i’m falling, but i’m getting much more comfortable with it.

speed wobbles are real. yes no doubt. but there’s a lot to be said for practice and training.

a bit of body weight distribution goes a long way. I like to ride my trucks loose. yeah sure tight trucks are more stable but the extra work you put in with loose trucks builds your muscles and balance so that you can have the best of both worlds. tight slow speed turns and controlled carving. I always ride as loose as I can without wheel bite. after a week or so you will be hitting those high speeds without wobbles just from your own core strength. knowing where to put your weight and how make micro adjustments to stop the wobbles comes with practice. but then again… you could be the guy up front chugging a beer… or the other guy… 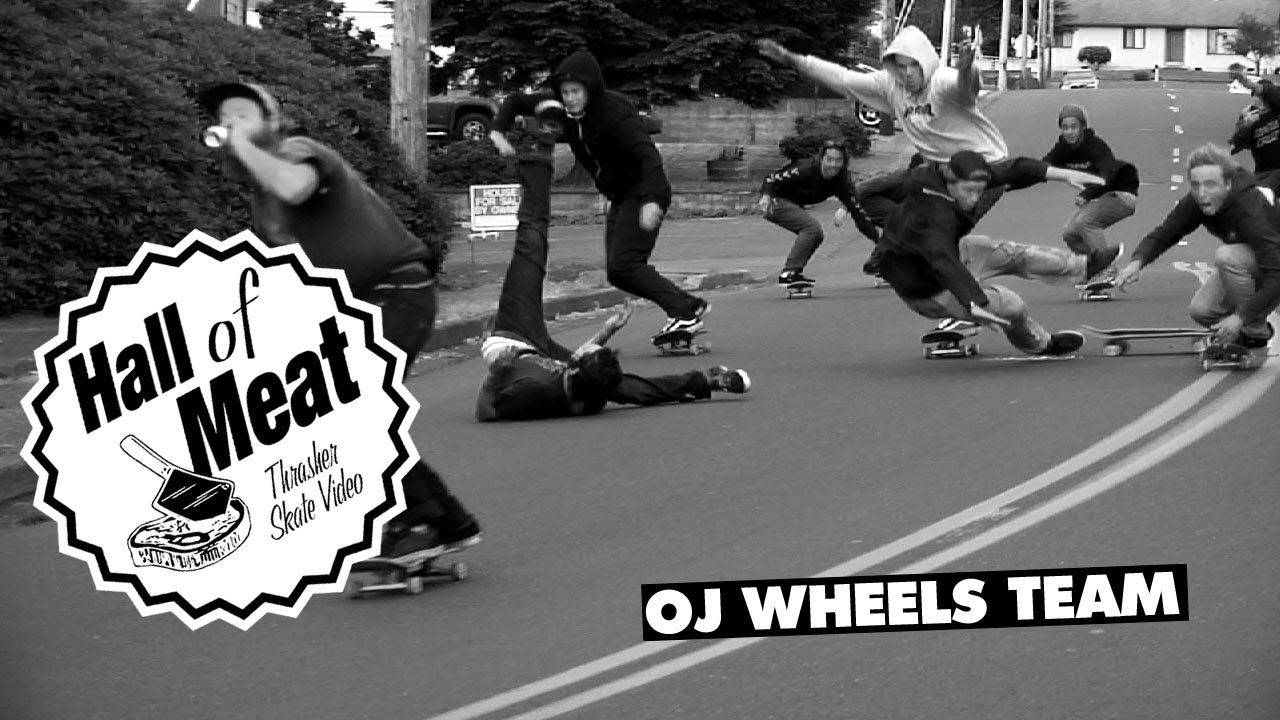 And the drunk guy wins lol

I’ve changed my bushing configuration again; double barrel venoms with 90a boardside and 83a roadside. The softer roadside barrel allows decent turning but seems way more stable than the cones. I miss the extra turning radius of the cones, but it seems like a good compromise.

I’m now experimenting with kingpin nut tightness. How tight is “standard” tightness? Until the bushing is slightly engaged\compressed? Even more than that? I’m measuring by how many threads of the kingpin are exposed, but of course that’s not a universal way to measure. Thanks to you guys, I’m also looking into wedges to alter the truck angle. Although I’ll note that I’m not interested in exceeding 15-18mph, if that.

Most of my riding is chilled-out carving at 10-12 mph. Is altering truck degree for these speeds overkill? I think that my crash was due to my trucks being all-the-way loose. The default bushings in the Paris trucks were so stiff that I backed the kingpin nut way off; there was no almost bushing compression to keep things stable. The pneumatic wheels I’m running, for all their benefits, definitely aren’t as nimble as regular wheels. I can see why Evolve uses Gullwing-clone trucks that have 2 kingpins and 4 bushings each.

In my initial post. I should have noted that I’ve experienced speed wobble a lot in the past on a regular skateboard (non-electric and 'thane wheels), it just never tossed me off of a board! All of my past skating was at lowish speeds, and when wobble happened it felt like there was plenty of time to correct it. This is where eks8 wobble seems unique; acceleration is rapid and there might not be enough time for an intermediate rider to identify it.

Ha! Thats about what i use for my dance set up. Well evolve boards are slow to my understanding( i may be wrong i know they got lots of different boards. I also thought gullwing trucks were made for hard carving and pumping. I wouldnt use gullwing trucks for anything with speed. I prefer carver trucks for carving and pumping personally since they are pretty much self propelled. If you like surfing check out carver surf skate boards. I have a lot of fun with mine for flat ground. They are totally speed wobble hell with the swiveling trucks. I think changing the angle of the trucks is overkill at those speeds. I can kick a longboard 12mph lol. I engage the bushing but never tighten it down. If you have to tighten your bushing down so it is squished … it is over tightened and you should use a harder bushing. Just my opinion.

Thanks @kai you’re right that we can kick to 12 mph ha! I might be underestimating speed; I’ve been basing it on my ability to hop off the board and run it out if needed (I know my sprinting pace); so not an accurate measurement at all! I completely agree about the kingpin but tightness; I tighten just enough to see that the bushing is engaged.

@treenutter I’ve been clocked at 16mph on flats just kicking. Also, I allow about two threads to show on my kingpin. That unit of measurement is real! lol

Also, I allow about two threads to show on my kingpin. That unit of measurement is real! lol

P.S. You can go that fast because at least some part of you build is red, which is 20% faster!

The Kingpin Thread unit is sort of like tons i would imagine. You have long tons, tonnes (metric), and short tons. lol

What good would it be without ridiculous complications?

Also, its true about the red. When my board just had the default bustin graphic, I was only able to achieve a mere 27.8 mph peak. I didn’t hit 31.3 until i had added 20% more power by painting the whole thing red. In fact its possible that the all the varied colors of the electronics inside the box are what’s really slowing me down at this point, so i should probably just dip the whole thing in red, motors and all.

I do like your 2 thread unit. i do about the same. and if I want tighter I get a harder bushing. I hate seeing 5mm of thread sticking out the top of a truck… its just an astetics thing I know, but I’m a little bit OCD about things like that.

You could always turn the kingpin over so that the nut is inside the baseplate. Then, no matter what, it will always be just the head of the kingpin to tighten.

yeah you can do that with reverse kingpins,but I use a conventional truck on mine so thats not really an option.

what blasphemy is this? do people actually do this? it seems like it would look a lot cleaner, but impossible to get the pin back in without removing the truck if you took it all the way out. I guess in drop-throughs it wouldn’t matter much.

I remember the gunmetal trucks came like this. They even had a little revolver cylinder stamped on the head. I hope someday Caliber and friends make up and they reincorporate the design into the Caliber trucks.

On Calibers it makes it a little easier to switch out bushings by reversing the bolt. No need to remove the truck.

On my personal boards I use a hard bushing boardside on my rear truck only, the rest I leave soft. When not carving the hard bushing helps lock in the rear truck and you still get good carving when you need it from the soft bushings.

actually now that I think about it. the randal trucks I have are reversed kingpin by default.